“They will be recreated from scratch, reincarnated into a race who does not know its own origins. They will believe a made-up past engineered into their memories, but we do it for their own good. It is either this or oblivion. The legacy of the Vida'Rra will live on through these entities, and we will be always watching over them.”

The Bonio are a species of humanoid avians native of Planet Bonaih, located at the Milky Way Galaxy. One of the descendant races of the legendary Vida'Rra, they were created by the Vida'Rranlora and placed at Bonaih with a tribal knowledge of the world around them, forcing them to evolve by themselves from that moment on. Today, the Bonio are well known across the Milky Way as one of the founders and member races of the Indoctrinate Collective and the Vengeful Claw.

Often stereotyped as a race of traders and merchants, the Bonio indeed put a great emphasis on commerce in their culture, being a staple of their lifestyles for thousands of years. Generally friendly and welcoming, the Bonio are considered one of the nicest alien races to inhabit the Indoctrinate Collective, though this does not mean they are universally gentle for more hostile Bonio are known to exist, living in pirate guilds or under the rule of the Vengeful Claw where they may be as far as terrorists.

The Bonio are one of the children races of the Vida'Rra. They have no memory or records of their life before they were a tribal race, and as such, their specific origins remain ambiguous. What is known is that their spacefaring empire was created 45,000 years ago and was called the Bonio Republic. Neighbours of the Dracogonarious Empire, the Bonio developed a rather close relationship with the Dracogonarious, becoming trade partners and allies with the scientists. The Bonio's main rival in the region was the Ernai Empire, who retained much of the influence due to their military prowess. However, after the Ernai were destroyed by the Spinker Empire, the Bonio's economical influence grew considerably. When the Marinox arrived, the Bonio joined forces with the Dracogonarious and the Spinkers to push them back all the way to the galactic core. The Bonio were one of the several races present during the Battle for Planet Kaizox. Following this, some Bonio felt under the influence of the Vengeful Claw, much to the Republic's dismay.

The Bonio were of the major fighters of the Second War of Black Fog, and a minor empire during the War of Claim. At the beginning of the war, the Republic joined forces with Dracogonarious Empire and the Spinker Empire to combat the Corruptus. At the same time, the Republic also fought the growing Tabescere threat. As the war progressed, the Republic stumbled on Mimi, who informed him of her mission. The Bonio would remain helping their allies in combating the Loron'Kikra and the Marinoxidiz, suffering major casualties. After the death of Kolossus, the Republic was also aided by the Thoi Armies of the Realm of Dreams. The Republic was present in the final battle of the War of Claim, where it helped putting an end on Moxix, and later fought Shu'rimrodir himself in the Realm of Dreams. By the end of the war, the Bonio Republic had suffered the most casualties out of the three allies. With both wars over, the Dracogonarious, Spinker and Bonio united their governments into one, creating the Indoctrinate Collective. 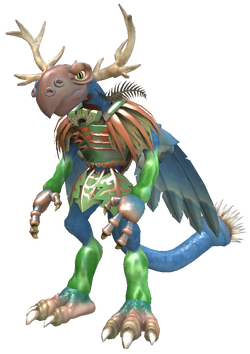 Bonio are human-sized, avian, fairly humanoid creatures. Their bodies are covered in usually blue feathers which go all the way to from their heads to the tip of their tails. The feathers on their limbs change to a noticeable shade of green, and on their chests and back, they all possess brown-coloured feathers. Bonio have a pair of horns on their heads which extend at usually 1.5x the size of their own skulls. On their necks, all Bonio have a pair of cartilaginous, sensitive tendrils which serve no apparent purpose. Bonio possess a pair of wings which they can use to fly over long distances. On their backs, they also possess bony structures coming out of their spines which appear like fins. Their tails are long and flexible, and at the tip, they possess a striking weapon with several rows of spikes, which they can use as a weapon against their enemies. The Bonio appear to be partially composed of Dream Energy and possess numerous similarities with the long-gone Vida'Rra.

The Bonio are a very social species. Individuals of the race dislike being isolated and always prefer to be in the company of other sapients over being alone. Bonio are well known for evolving in a culture where material wealth was considered a highly respected trait, and as such, many Bonio strive to be as wealthy as possible through either legal or illegal means. Around their territory, Bonio pirates who obtain wealth and bounty hunters are very common. However, most Bonio are friendly and welcoming creatures, ready to accept any sort of partnership and fiercely loyal to their allies.

Bonio are fairly strong creatures, being around as strong as a Spinker but overall weaker. This makes the average Bonio around two times stronger than a human being. They can use their tail weapons to stab and cut through enemies who fight them unharmed, and can use their wings to fly over long distances for extended periods of time. As expected from their horns, Bonio can also fight by headbutting their enemies. Bonio possess very high Essence potential, though cases of Bonio actually using Essence are extremely rare. 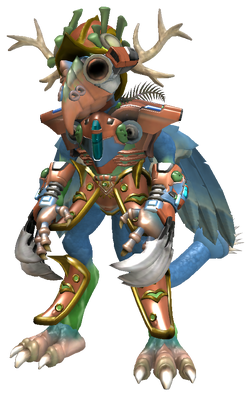 Herquie is a famed Bonio warrior who currently serves the Indoctrinate Collective. Formerly one of the galaxy's most feared mercenaries, he was discovered to be directly related to the ancient Vida'Rra demigod Rhigeo Fuerq, being related to him by blood, and he was fundamental for the defeat of the Corruptus during the Second War of Black Fog. After the formation of the Collective, Herquie found himself in a new home which accepted him. He now serves as one of the Collective's two Royal Admirals. 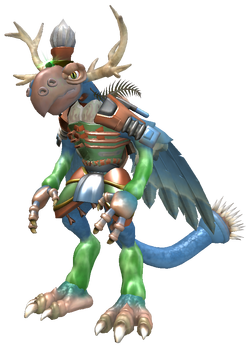 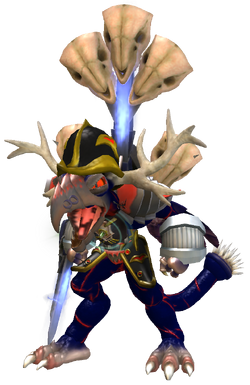 “I spill the blood of heretics in the Devourer's glorious name!”

Arberkul was once a Bonio captain serving for the Indoctrinate Collective. He was tasked of taking care of the empire's Borealis territory when Marigrax first arrived, making him one of the first victims of the vile Mari'verao's corruption. He served as the internal leader of the Devourer's Chosen's Champions, being the most powerful and with the most experience. Deranged, violent and fearless, Arberkul was a force to be reckoned.

“I have had... unpleasant encounters with Bonio pirates and mercenaries before, having worked against - and occasionally with - a couple of the more questionable guilds in the galaxy. They're not a bad people per se, but you should not ever turn your back on one if you know what is good for you.”

“I have met with their people on occasion - opportunists, mayhaps, but hardworking and committed alongside. Kindly and welcoming, pleasant with their mannerism if one can afford to buy their trust and time. An invested people, for sure.”

A Bonio corrupted by Nightmare Energy 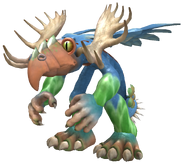