The Bisistar, also known as the Twelfth Tribe are a highly advanced race of Capricyránae native to the Cyranai Galaxy, a satellite of Cyrannus.

They are highly intelligent, manipulative, deadly and misleading and often use this to trap and trick lesser races into following their will. It is because of this that, biologically the Bisistar are probably the most deadly Capricyránae race.

Because the Bisistar originated in unknown space, they have had little or no contact with civilizations in Cyrannus for hundreds of thousands of years, yet when an unknown Cyrannian vessel entered Cyranai, the Bisistar saw it as an act of aggression and invaded the galaxy.

The intial invasion was nothing short of devastating, with the Bisisitar invasion fleet breaking into the Core Worlds and laying complete siege to the Pyrínan Capital, completely destroying it, killing two trillion citizens. However, with time, the Republic was able to recover and forced the extragalactic menace to escape to their homegalaxy, swearing revenge.

The Bisistar invasion was lost to legend and myth, and their name became unknown in Cyrannus. However, they appeared once again when contact was made between the Bisistaran Realm and the United Republic of Cyrannus. Upon hearing from the captain of the URC ship, Captain Roslia that they were from Cyrannus, the Bisistar quickly opened fire, nearly destroying the ship. However, the Avenger was able to escape, only to lead the Bisistar into Cyrannus, where their second invasion began.

However, for many months, the invasion remained quiet while the Bisistar prepared their attack force for the destruction of the Cyrannian Neraida. fter decades of research, the Bisistar have found out the Grox are in possession of a megastructure of Oikoumene origin somewhere in their territory. The Bisistar's plan was to capture this megastructure for themselves and use its seemingly divine technology for their own selfish, deadly reasons.

The Bisistar made their first move into Grox territory by sending a large fleet into the Unknown Regions, searching for the Grox space. They were soon detected by a Cube fleet, and a large battle ensued. Both sides were surprised with each other, the Bisistar didn't expect the Grox to be that powerful, and the Grox weren't prepared for the technological might of the Bisistar. The battle raged for a while, but it ended with the Bisistar being victorious. They had to return to the nearest colony for repairs, but now they knew their opponent's strenght, and how to fight it.

After the establishment of the Galactic Empire of Cyrannus at the closing of the Great Cyrannus War, the Bisistar were the only Capricyránae species not united under Tyrómairon. The Bisistar were struck by the news of the Galactic Empire of Cyrannus' formation and discussed their next actions. This Empire could prove to be a real threat to them, even more than anything they would had ever faced. The Bisistar Queen ordered the retreating of all forces on Cyrannus, which left back to the Cyranai Galaxy.

The Bisistar would later "welcome" a new face into their galaxy, the New Ermitant Republic. Not revelaing themselves, the Bisistar apparently showed interested in aiding the Republic into growing and becoming a solid member of the galaxy. However, this was nothing but folly, as the Bisistar only wanted to manipulate the Ermitant into working for them later. The Ermitant are not aware of this, and may not be for a long time. During the second year of the Dark Times, the Bisistar Queen ordered General Natico to her in order to coordinate a new Bisistar invasion of Cyrannus, this time using subterfuge instead of direct force. However, she ordered a Bisistar fleet to put an end to one of their old enemies, the mysterious Neraida. However, with the knowledge possessed by the newly assimilated Apollo, the Bisistar began to be pushed back. During their battles, the Neraida even managed to assimilate several Bisistar, though their attempts to create these super-drones were halted by the Indoctrinate Collective, whose operatives caused their destruction.

In their travels in their home of the Cyranai Galaxy, the Bisistar came into contact with a new civilisation known as the Regellis Star Empire, native to the nearby Quadrant Galaxies. Sensing that the two civilisations were rather similar in their motives, the Bisistar agreed to an alliance with the Star Empire, in exchange for knowledge about their home galaxy of Quadrant 89. In need of strong allies, the Regellis agreed. The two vessels then departed into the Quadrant 89 - Cyranai Wormhole.

Battle of the Core

In their ongoing war against the evil Neraida Gigamatrix, the Bisistar drove deeper and deeper into the Gigamatrix, killing and burning as they went until they eventually found themselves on the very doorstep of the centre of the Neraida, the Core. Under the command of the fiendish Natico, the Bisistar were surprised to see that the Cognatus Empire also arrived to locate an ancient Oikoumene artifact. The two factions formed an alliance against their mutual robotic adversaries and began their attack, which resulted in a three day battle. The conflict came to an abrupt end however, when the Core mysteriously exploded, causing the Neraida to retreat. Unbeknownst to the Bisistar, this was due to the Cognatus retrieving the ancient AI known as the Licent. With the battle over, the Bisistar returned to their invasion zone. 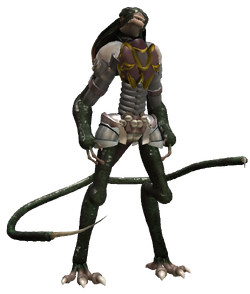 “Bow to your queen!”

Ruling the Bisistar Domain with iron claws, the Bisistar Queen has ruled the Domain for thousands of years, with many of her children serving in high ranking positions across her realm, which spans the Cyranai Galaxy. Well versed in her people's ancient legends about the Neraida, and harbours a deep resentment to them, willing to lay down her life to end them.

With her real name lost to the ages, she is simply known as the Queen to her people. She is beloved by her people and is an expert in manipulation, bringing thousands of races under the command of the Dominion, whether they know it or not. Recently, the Queen has ordered the invasion of Cyrannus through infiltration and patience. 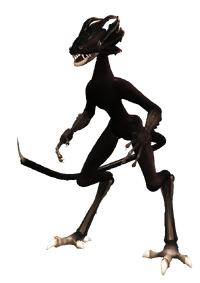 “The very shadows work against you. The Empire has eyes everywhere.”

Moranonúngur was once a dreaded Bisistar commander, that infiltrated millions of empires across the universe, including the URC, Rambo Nation and Humanity. Over a period of centuries he gained vast powers at his command, but was soon approached by Tyrómairon and was given command of vast Mornûnenduran powers.

Now the secretive leader of Imperial Intelligence, Moranonúngur's main occupation now is rooting out enemies of the Empire and bringing them to justice. He also takes an interest in the pursuit of Apollo, but decided to let other officers take care of it. 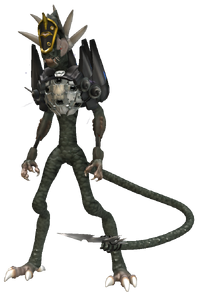 “You're an interesting pastime, Ermitant Republic. Let's see how much of a benefict you can be.”

Catulus is a high ranking infiltrator of the Bisistar Domain, whose service in spying and manipulating governments spans decades. He has infiltrated multiple empires in the past, including the Dogorahin, the Palda, the Jinpolia, the Mur Dozona and the Maneti. It is possible that he has already infiltrated races in the Cyrannus galaxy and the Quadrants as part of a personal training.

During the Dark Times, the Bisistar Queen trusted Catulus the mission of infiltrating the government of the recently arrived New Ermitant Republic. Who knows what kind of vile things Catulus has planned for the innocent Ermitant...

The Bisistar are without a doubt the most alien of all the Capricyránae, having a bizarre appearance that makes them instantly recognisable when contrasted against the other races such as the Basileus and the Libertus. Their biology is even more strange, with even the weakest Bisistar being able to shapeshift into another creature, which helps greatly in the Bisistar's manipulation attempts against lesser species that may one day pose a threat. It is known that, though Bisistar have two genders, there is no visible sexual dimorphism, with females showing no distinction to males.

A large Bisistar cruiser often found backing up the larger Tethys-class with it's powerful weaponry, packing a huge punch, making the Nicor-class a key part of the Bisistar Domain's fleet. Often encountered before a Bisistar fleet serving as a scout ship, they also provide assistance in orbital bombardments. 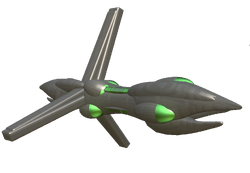 The most mysterious Bisistar starship, the Vila-class is generally smaller than the Tethys or Nicor-classes, but still packs a mighty punch, being primarily a military vessel, equipped with a strong laser of unknown design, making it a deadly adversary to the enemies of the Bisistar. The design of the Vila-class is also quite mysterious, being primarily organic, giving it the name, Bisistar Bioship. Nevertheless, it is believed that a single Vila-class is quite capable of fighting against a Grox Cube.

“I suppose we can find use for you, yet.”

“We're keeping an eye on you.”

“You don't know it, but you're digging your own graves.”

Add your own here!

“Huh, the Bisistar used to creep me out. But now, I couldn't care less.”

“They list us as enemies, while we have only heard rumors about them. What did we ever do to them to anger them?”

“You have made a terrible mistake.”

A Bisistar wearing a traditional uniform. 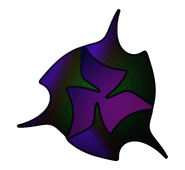 The symbol of the Bisistar Domain.
Add a photo to this gallery

Retrieved from "https://spore.fandom.com/wiki/Creature:Bisistar?oldid=762079"
Community content is available under CC-BY-SA unless otherwise noted.