NOTE: This page is about the Arnodians in the Aurora Galaxy, not the ones in the Novia Galaxy.

The Arnodian (Audax Rector : meaning Bold Leader) are a civilized species, still early in their technological tier. They can be described to look like an reptile race. The Arnodians have a stable economy, society and military, all which are divided into categories. The Arnodian are known as the Sixth Race in their home galaxy of Aurora, with many enemies and allies. Arnodian history dates back to N12,456, and until 2941 A.D electricity remained undiscovered. It is only in 3044 A.D when they started making progress with space exploration.

Arnodians are noble, proud soldiers. Most of their people are trained in the military at the age of 16. Common professions for an Arnodian are either a trader, soldier, technician or a pilot. Their society reaches out through many worlds. Nodia, Tor, Kenta, Afar and Eidas are the most known, then there is the UCA headquarter planet, and the first planet they colonized, Focus. They cannot advance through more planets, due to their requirement for carbon monoxide. 32 planets and 15 moons have proven suitable for their race, most planets have been Terra-formed to suit their needs. Their society is lead by an organization known as the Office of Intelligence (OI). The OI is lead by the Arnodian Command. All civilian matters are decided by the OI.

“The OI may control the civils, but they don't control us.”

During the early ages of space colonization Arnodians rely on their production of kerosene, uranium and tritanium. Their M50# fighters rely on the kerosene supply, and this all changed when the discovery of Protanium happened. The Protar did not have much use for the Protanium, so they let the Arnodians mine it at their free will. Nowadays all Arnodian space ships are built of this material. Protanium has the same resistance as an HP10000 class shield.

The first Age recorded in Arnodian history. During this time, Arnodians had basic understanding of space, and used projectile weaponry. They witnessed the arrival of the demigods on their home planet of Nodia. The Demigods were a ruthless species, planning on enslaving the Arnodians. Many cities were culled and thousands died in the hands of these "gods". The Arnodians were saved by a yellow space ship coming from the sky to vanquish the Demigods. And using space ship technology they harvested from fallen Demigod ships, they built the Tollathant-1 of the Arnodian Command.

During their first decade of space travel, the Arnodians came across a species on their Arnodian colony of Kenta. When the Arnodians refused to surrender oil to the creatures, they launched a full scale attack on Kenta. Eventually they were stopped, but with heavy casualties. Shortly after this, the Arnodians sent 50 Tol-4s to the attacking race's homeworld, and destroyed what they could from orbit. The Arnodians dubbed the race "Scum", after their original name Skavâ. Scum use high amounts of kerosene in their spaceship engines, thus answering why they needed the oil so badly. The war with the Scum raged for 9 years, until the Tol-20 ships joined the battle. They turned the tide of war, and ended it. The last known Scum live in poverty and refuges around the Beta wing of the galaxy. 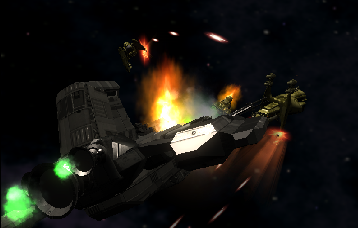 After the end of the war with the Scum, the Arnodians had little time to relax. One Tol-16 ship on an expedition was ambushed by an unknown cruiser. Many thought that the Scum were back, but the Protar informed the OI that the attacking cruiser belonged to an sub-species of the Arnodians known as Lo'Dians. Lo'Dians are much like the Arnodians, except 2 feet taller and possess technology far more advanced. The conflict ended in 3074, after signing a peace treaty between the two races, seeing as neither could win the other without devastating costs.

The Asgard are an extremely advanced race, whom refuse to share technology with the Arnodians. From time to time they have proven useful to each other. It was the Asgard that informed the Arnodians that they were becoming the Sixth Race, and able to join the Council. The Asgard are part of the Council of the Six.

The Spodian are spiritual race, well atleast they were until they discovered what Spode was really like. They have long planned to find Spode, the false god. Sometimes in exchange for help, the Spodians have given the Arnodians weapons, for example the laser beam weapon. The Spodian are a part of the Council of the Six.

Discovered by the Protar, the Treedor are in a similar stage as the Arnodians. But slightly less advanced. From time to time the two races offer each other technology to use. There is not much known about this race.

Years after colonizing a small part of Novia Galaxy, the pilgrims had invented new weapons and ships, more vast than before. Ion cannons and amazing ships of impressive power. Immortality was also discovered from a barren planet. The wormhole to the Novia Galaxy was lost shortly after this.

“We took 10 ships, and destroyed them from above. The medals I won there won't help me sleep at night here.”

“Look at the future we are giving to our offspring, doesn't seem to nice, does it?.”

“Boys 'n girls, saddle up! Them Lo's came 'n scared the crap outta some of 'em civilians! Guess what we goin' do? We goin' bomb 'em straight to... GET DOWN! GET DOWN!.”

Retrieved from "https://spore.fandom.com/wiki/Creature:Arnodian?oldid=803065"
Community content is available under CC-BY-SA unless otherwise noted.