The Amiaeria are a race of humanoids native to the Quadrant Galaxies, though they have genetic similarities and are distant relatives of the humans found at Earth, a planet located in the Milky Way Galaxy. Their green colored appearance and nose for trade is well known across Quadrant 82, as well as their large ships and nose for profit. The entire nomadic race eventually became members of Rambo Nation, settling at their colonies. The Amiaeria have three different genders, something unique and unusual for the Quadrants.

The Amiaeria are a green colored humanoid species, walking on two legs and with two different male appearances. Though normally a nomadic race, their home system lies in the north east of Quadrant 82, with their capital known as Parjurba

The female Amiaeria are cute, and a great sight to look at. But they use a special hormone which can seduce many differant a kind of male, and so they are seen as experts of seduction. They often wear exotic cloathing. The females are often abducted and sold into slavery for their beauty, they are also often holographed for perserve meanings. The Amiaeria Males are more agressive and have a differant appearance. More musculair and carrying weapons and shields, the Amiaeriae Males are built for combat. They are Ground Forces, working together with the Rambo military. The Amiaeria males see their soldiers life as an honor and they will do everything to protect their home.

There is also a third race known of the Amiaeria, the so called Nobles. There isn't much known about them and they are secretive and always plotting to gain more power, influence and wealth. They are seen as the rulers of the Amiaeria, but had to give up that position upon there joining to Rambo Nation. Though some were reluctant, they are now searching ways to gain influence in the Rambo Senate and beyond. Those who were reluctant to join Rambo Nation are dangerous and cunning.

The Amiaeria dislike the slavery abuse of the females, yet they got used to it due to its long time rivalry and hunting by the slavers of Sanderhal. They are known to build castle like structures to live in and defend themselves. Genetic research shows the Amiaeria have a genetic relation with humanoids from the Milky Way Galaxy.

The history of Amiaeria is well chronicled, native to the world of Sainte-Église, they founded kingdoms ruled by monarchies. The greatest amongst their kingdoms and cities is Avignon, a fortress city located near the coast and well protect by natural barriers. Known for its wealth, wisdom and reference to the mythical Qo-Oh this city was often seen as a neutral place to meet. The Amiaeria view the mystical Scion Qo-Oh as a devine being. Sadly, jealously amongst the monarchs of the various kingdom resulted in an attack at Avignon and the destruction of the original Qo-Oh temple, forcing the Scion the flee the city, never to return. This event happened around 480 BQF.

The people were furious and around the globe revolutions arose and the monarchs were overthrown by the common people, resulting in the founding of the democratic Republic of Église. They adopted the ancient Sigil of the Monarch of Avignon (who died during the attack). The sigil shows their weapon insigna in white, the wings and head of the Avlias and the curls of peace and prosparity. Over the following years they sought a way to find the Qo-Oh and reconstructed the temple to no avail. Eventually around 250 BQF the Amiaeria managed to send space ships into space and began colonizing their surrounding planets, expanding the Republic. They opened trade relations with many species though kept themselves out of conflict, and were even spared during the Second Galactic War in 0 BQF.

The following planets are mostly inhabited by the Amiaeria. 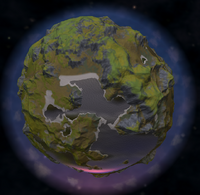