“We were created to spread and maintain life through our galaxy. Borealis is our garden, and we are its gardeners.”

The Alvino (Kormacvish: Gardener) are an ancient species of sapient plant and one of the precursors of the Borealis Galaxy. Created by the ancient Kormacvar to maintain the biospheres of their colonies, they would become known to the newer races of the galaxy as a race of vicious locusts, mutated into servitude by the dreaded Regnatus. In the current day, the Alvino have been reverted to their original forms and live under the Kormacvar Legacy.

The Alvino were created during the Golden Age of the Kormacvar Empire 5 billion years ago. They are one of the two child races of the Naombur alongside their sibling race, the Caretakers, and were created for the purpose of maintaining the biospheres of Kormacvar colonies. The Alvino were created at the Kormacvar colony of Viniaris, which would serve as the home of their progenitor and leader, Floridarixis. Through the following millenia, the Alvino were spread through virtually all Kormacvar colonies and like the Caretakers, they were an essential part of the empire. Following the Grox invasion, Regnatus took over the minds of the Alvino and forced them to evolve into a race of bloodthirsty locusts known as the Alvino Brood, serving under the Borealis Grox Empire.

A single Alvino expedition to an specific barren world millions of years in the past resulted in Alvino spores being left at the surface of the planet, and these spores would evolve into an entire ecosystem by their own, separated from Regnatus' hivemind. The planet would be known in recent times as Macronormus. The Alvino Brood would become one of the most feared factions of Borealis, with the Rovegar Matriarchy and the Kondrakar recalling them being an unstoppable foe who disallowed them of venturing into their territory during ancient times.

The modern superpowers of the galaxy, the Zoles Imperium and the Wranploer Legion, would first meet and fight the Alvino during the First Borealis Galactic War, where their combined numbers managed to keep the Alvino from spreading despite their advanced technology. During the second Borealis Galactic War, the Alvino became more and more aggressive due to Regnatus' orders and launched large invasions which damaged large empires such as Da Rogue Boyz and completely eradicated empires such as the Lamelota.

The Zoles and their allies eventually stopped them after venturing into Viniaris and slaying Floridarixis. Following the end of the war, the Alvino were recreated in their original forms by the Kormacvar Legacy, no longer mutated or hiveminded. They currently serve the Legacy, being powerful allies of the Polar Crystal Alliance.

A race of sapient plant organisms, the Alvino are roughly human sized, humanoid beings with a distinct feminine appearance. They have long, sleek limbs which appear like trunks, deep green eyes and branches on their backs which grow large leaves, flowers and even fruits. Alvino fruits are said to taste like Terran tangerines. They possess impressive natural ornaments on their heads and their hands are often described as warm and soft to the touch. They are a female-only race incapable of reproduction, with all individual Alvino being birthed by seeds created by their Brood Mother.

The Alvino are one of the most docile and gentle native races of Borealis, being created for the purpose of maintaining biological life. They are carefree creatures who enjoy their jobs as galactic gardeners, and do it with great pride. Alvino do not have to be ordered nor taught to do their tasks, as they have full knowledge of it from birth. They share a strong link with their sibling race, the Caretakers, and often look up on them as inspiration.

All Alvino possess special pheromones designed to cause the wildlife of alien planets to not see them as a threat and allow them to approach or make physical contact with no fear of retaliation. They are slightly stronger than humans in physical terms, but only use their strength for manual labour. All Alvino have powerful psychic abilities which allow them to do feats like telekinesis. Being plant-like, they can feed through photosynthesis to sustain themselves, and they share the Kormacvar ability of reading through the brains of other races through touch, allowing them to quickly learn other languages. 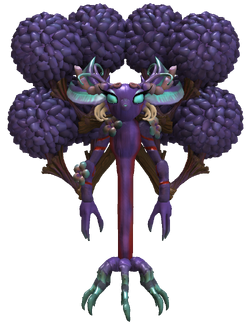 Floridarixis is the organism who gives birth to the Alvino and acts as their internal leader. Formerly an ancient, corrupted monster serving under Regnatus, the Brood Mother was killed during the Second War. However, Regnatus' databases had copies of her genetic code, and the Mechanic issued a project to clone her back to life. She currently resides at Viniaris, birthing more Alvino. 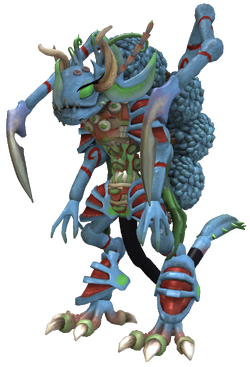 Proxy A086 was an hybrid if mutant and true Alvino who served as the leader of Proxy Squad, the 16th members of the Penumbra Unit. The Proxy Squad was considered top secret even through the Penumbra Unit, who were for the most apart unaware that a squad of mutant Alvino served the organization, or that an entire squad was considered to be Penumbran X016 rather than an individual.

The Proxy Squad's dealings were shady at best, meaning most of their operations were unknown. However, the squad disappeared during a raid to the New Wranploer Legion, when it discovered the pirates were attempting to create their own brood of Alvino to serve their interests. Proxy A086 fought Dark Grip member Chahenthras and defeated the Legion, but when confronted by the artificial Alvino Brood Mother, all contact with the squad was lost. While the Alliance officially declares the Proxy Squad missing in action, rumours claim they chose to absorb the artificial Brood Mother and create their own brood of mutants. These are unproven, however, as the Proxy Squad was never found following the incident.

“They're so adorable! And pretty! And cuddly! I wanna keep one!”

“Ever so shapely and generous, I hear that they're very good with their fingers.”

“They look lovely, I wonder what their fruits taste like.” 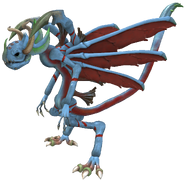 The Alvino, mutated by Regnatus 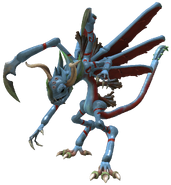 A mutant Alvino in a battle-ready stance