“An old rival of my race, the Libertus. The Adlapuspino are known for their loyalty to their allies.”

Adlapuspino are a race of Capricyránae in the same grouping as the Cavaneu and the Tenerensis. They are known for their deceit to strangers and yet they are loyal to their allies and would risk death to ensure their safety. They are members in the Galactic Empire of Cyrannus.

The Adlapuspino evolved into the Inner Rim planet of Aegyptiacus, a very dry planet filled with many hot deserts, but also filled with many rivers filled with different kinds of fish and other water animals. They would at some point be uplifted by an unknown space-faring empire and develop sentience, creating their own civilization which would then evolve their own spaceships.

The Adlapuspino evolved their empire and expanded through the territory near their homeworld, becoming a notable member of the galactic community in their region, but at the same time, very mysterious and secretive.

The Adlapuspino's expansion through space would eventually lead them to the Core Worlds, where they met the Libertus. With bad first impressions, the two species waged war on each other, fighting over control of the regions between their two territories.

Their power and influence would later lead them into becoming members of the Confederacy of Allied Systems, becoming an important but still secretive member. When the Galactic Empire of Cyrannus was formed, the Adlapuspino were content with the changes in the galaxy and continued part of it without any questions. However, many followed the Adlapuspino known as Taros Cassynder, who is currently leading the Confederacy of Free Planets, a remnant of the CAS that seeks to destroy the Empire and replace it with a confederate government.

The Adlapuspino are quite a secretive race and as such, little is known about their culture and society. However, it is known that they often are quite similar to the culture of nearby allies perhaps indicating that they are quite liberal, bringing in the cultures of foreign empires and species. Nevertheless, many of this great species are quite proud and arrogant of the happenings of the major galactic governments of the galaxy. 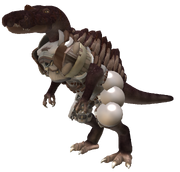 Though a former member of the Confederacy, Cassynder has a certain hatred for the Basileus and the Tiranozark, strongly believing that they shouldn't have been permitted to join the Confederacy. Nevertheless, he has learned to respect other cultures, knowing that he would need all the help he can get against the march of the Empire.

Adlapuspino is known for its elongated snout, it's sailed back and it's huge claws. In prehistoric times, the Adlapuspino used these skills for catching it's favourite food, fish. It also used it's huge claws to frighten away potential competetion and to catch land prey when fish wasn't available. Perhaps the Adlapsuspino's most notable feature is it's sailed back which is used for both display and for controlling body temperature when in hot climates. However, this sail has evolved much smaller over the generations as it became a liability if the Adlapuspino fell, it could easily break it's backbone.

Adlapuspino often appears to be a bipedal crocadile and as such, it is a great swimmer, which in ancient times was used to sneak up on potential prey on the river bank, much like a terran alligator. While it's colors may appear to be dull by some, their sail can be flushed with blood, which is used in mating displays and in ancient times, as a method of warding off potential adversaries. 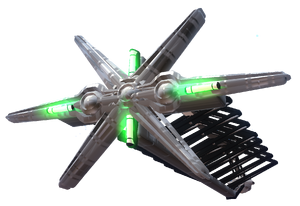 The Star Sailor is the Adlapuspino's primary method of travel and defence, despite the fact in it's base form it is devoid of any weapon systems, only a strong shield and lightning fast speeds. The Star Sailor was even used during the formation of the Galactic Empire of Cyrannus, with several accompanying Tyrómairon's fleet.

“Powerful members of the Confederacy. Though sometimes I distrust them.”

“They can make very good business. However, their secretive attitude makes it much harder to sell.” 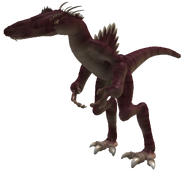 An Adlapuspino without an outfit
Add a photo to this gallery