The term creature in Spore refers to the organism controlled by the player. The term is mostly relevant to the Creature stage, because that is the stage where the player controls a single creature. The creature begins the game as a micro-organism called a cell.

There are multiple types of creatures in Spore that the player can encounter through the stages: cells, creatures, tribal creatures, civilized creatures, and finally empire creatures.

In the Cell Stage, the player interacts with the world as a "cell", although it is more of a small, multicellular creature, like zooplankton. The objective here is to consume food to gather "DNA Points". The cell can then find a mate and lay an egg. This takes the player to the Cell Editor where one can give different abilities to the cell by adding parts, ranging from stronger weapons to various forms of movement.

As the generations go on, the cell grows larger and the camera pulls out until the cell becomes a multicellular organism, most often referred to as the creature.

After the Cell Stage, however, cells do not make another appearance in the game.

Creatures, also known as "animals", are non-sapient creatures. They appear in every stage except for the Cell Stage. In the Creature Stage, the player takes control of a creature in a 3D environment in which a planet is randomly generated to explore. Players can interact with other creatures and objects to gain DNA points which in turn is used as currency to customize the creature in the Creature Creator, as well as necessary to progress through the stage. Creatures can also gain pack members (from 0 pack members to 3 then to Tribal Stage, matching the 4 mini-stages of Creature Stage).

Tribal creatures, unlike animal creatures, are sapient creatures. They broadly appear in Tribal Stage, and other stages except for its preceding stages, Cell Stage and Creature Stage.

In the Tribal Stage, the player takes in control tribal members in RTS format. The player can command from single to a group of members to take action on selected object(s) (attack, impress, gather, etc.). As the player progress through this stage, there will appear several tribes that contain other tribe members. On most occasions, they will attack or gift depending on their relationship with the player's tribe.

In the Civilization Stage, they appear in tribes and are very minuscule and functions the same to the wild creatures in the stage; fleeing away from vehicles, and can be run over with them, which instantly kills them.

In the Space Stage, they appear in tribes on random planets. Sometimes, other empires request the player to abduct and bring the ordered tribe member on a specific time.

Civilization creatures are sapient creatures, much similar to the Tribal creatures. They appear in the Civilization Stage and the Space Stage, with no prior appearances before.

In the Space Stage, they function exactly the same to the tribes in terms of missioning.

Empire creatures are also sapient creatures, they don't have much difference from Civilized creatures other than the fact that they live in a more advanced society, their interaction with abducted citizens from other worlds may also differ as well.

Captains were introduced in the Spore Galactic Adventures expansion pack.

Each creature has its own set of "genetics", which is the procedural code compressed to a small size which generates the creature on a player's machine. You cannot create a creature without a mouth, as it needs food to survive. At least one mouth is required to save. (Unless you have certain mods that allow mouthless creatures to be saved.)

The size of creatures ranges from mouse sized to truly gigantic. For example, a normal creature might be as tall as you, while an epic creature can grow up higher than the trees. The epics can be defeated more easily in the space stage, due to the fact your spaceship can run away faster and has stronger weapons. Hyper Size creatures are far larger than Epics, and may exist on vast, unknown worlds.

Aquatic life was originally included in the game as an option for the player's creature, but they were removed due to animation difficulties (player would need to navigate in three dimensions underwater).

This does not mean that aquatic creatures do not exist on the planet, as there are the fish caught by tribes, cells, and the Sea Monster, but rather the player cannot play as one (except for the cell, as the player plays it in the cell stage).

Any creature can fly if given at least one wing, which are available in the detail section of the creature creator and can only be used effectively in the creature stage, however a creature will fly long distances in the tribal stage. The level determines how long one can fly, and the skill is called Glide.

Glide also adds the "Jump" ability, but will override it, leaving the creature only to glide, even when pressing on the jump button.

In the GDC 2005 presentation about Spore you can see a little creature flying away from behind a rock after the Willosaur escaped from the Splodey and Will Wright says "...on the other hand this guy is kinda fast...", talking about his Willosaur. Also, a more defined birdlike creature can be seen in the presentation as the Willosaur emerges from the water and onto land, the bird is seen on top of a tree and flies across to reappear again to fly above another tree and into the distance.

According to Gamespot, it was seemingly impossible to create a flying creature during the E3 playable demo of the Create a Creature system.

In a demonstration at Gadgetoff 2007, Will Wright created a winged creature in the creature editor. Despite having large wings relative to its body size which displayed some functionality once in the game world, i.e., they flapped as the creature walked, the creature did not ever take flight.[1] However an article published on the 13th of February 2008 at bit-tech.net claimed that placing wings on a creature would allow it to take flight.[2]

An element of flight is still in the game with the creature creator having four types of wings that allow the players character to 'fly' for different lengths of time. Only the highest-level wings allow a creature to achieve anything resembling true flight.

In the new expansion pack for Spore - Spore Galactic Adventures, the player's captain can be outfitted with a jet pack. If the player flies too high, lightning can strike the player's creature on planets with high atmosphere. 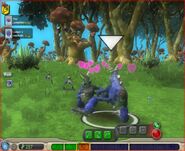 A large Ducky hunts down a user-created cell and a school of Punky (Beta photo).
Español Polski
Community content is available under CC-BY-SA unless otherwise noted.
Advertisement