Edit
This article is an overview of how the player interacts with the game during different stages.

Cities first appear in the Civilization Stage, but remain prevalent throughout the Space Stage. Their entire architecture is user-created (unless a Maxis creation used by the AI or the user themselves), and they act as the base from which the player can construct vehicles, a spaceship (or replacement ships when the player's ship is destroyed) and more buildings.

The layout of the city is determined by the player. As mentioned before, it consists of either the player's custom creations made in the building editor or premade buildings available at the very start. In GDC 2005, the city had pre-made sidewalks on ground level. As of E3, the sidewalks had been replaced by a more streamlined, apparently user-created, floor with no definite endings. This is evident in the greenness of the Greevil city floor and the mech-industrial look of the home city floor. Pedestrian versions of your creatures wander around the city. In the case of E3 when the UFO was made, some stood and watched the aircraft being created. Fireworks were launched once the construction process was completed. Buildings may also be created outside of city walls, such as turrets. Unlike real cities in the real world, there are no roads, or cars inside the colony. However, you can make cities with differing roads inside a colony-like city in the Adventure Creator. These don't appear in any in-game colonies though. There are no colony wall game props or buildings to add in an adventure, which gives a sense of creativity or a lack of materials needed to feel like you're in a real colony.

The player begins the Civilization stage in control of a single city. The player must build up his/her city and keep the inhabitants happy. Other cities will appear soon after the player has begun the stage; the goal is to bring all these cities under the player's control via Economic, Religious, or Military means. Users can only build vehicles based on the city type. Cities can be personalized using different architecture and building types, created in the Building Editor. Once all cities on the planet are conquered or destroyed, you can build a spaceship and launch it from your home city, beginning the Space Stage.

In the space stage, cities play another important role, producing Spice the player can sell to earn Sporebucks. Most cities in this stage are created via Colony Incredi-Paks, with the exception of the cities on the player's home planet and cities the player obtains from other empires through war, and trade.

Colonies are cities set up on worlds in order to claim them under that empire. Each T-Score level allows another city to be placed on the planet and increases the total number of buildings you may have in each colony. If the atmosphere is not yet viable, the colony forms a biodome around itself, or the player can use Terraforming to make the atmosphere suitable for the player's species. It is not yet possible to build a colony underwater, and they must be placed near a spice geyser to collect resources. The player may attack colonies with his/her UFO, or others may attack theirs, but generally alien colonies will not attack the player unless you attack them first, or unless relations between the player's empire and the other is bad. Attacking another empire's colonies is an excellent way to quickly expand an empire's territory, however, the player should be aware that the other empire will most likely retaliate, by sending invasion fleets to the player's colonies. The max limit to colonies allowed on a single planet is three, giving the player a possible haul of 15 spice (5 per developed colony, empty colonies produce nothing,) and 30 by placing a spice storage facility.

One technique for optimal colony layout is pictured below: 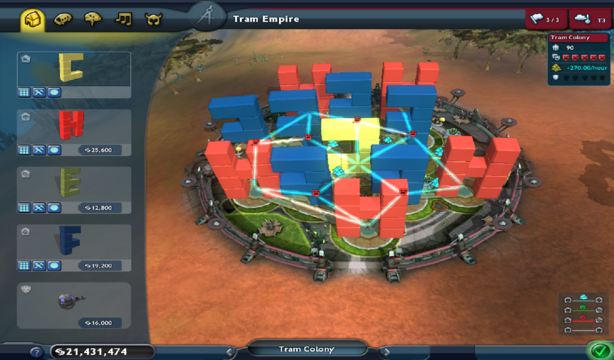 This is effective if the planet has a happiness booster and a loyalty booster, to prevent the negative effects of unhappiness.

Home cities are all the cities on your home world which you captured during the Civilization stage. They may also be attacked by other races. The player's Homeworld gives him/her a total resource limit of 50 spice, but the production of each city is far less than those of your colonies. Capturing an NPC planet, be it through war or economic means, converts all the cities on that planet to the player's faction, converting all buildings, vehicles and spice production to the conquering empire. However, the cities keep their original (far higher) production ability along with their spice cap of 50, making NPC homeworlds extremely valuable.