All must become part of me.

Warlord
The Herald of Ascension
The World of Corpses

Leader of the Children of Synthesis

“RUN. RUN WHILE YOU CAN.
FOR WHEN THE CORPSE GOD SEES YOU, THERE IS NO MORE ESCAPE.
FIGHTING BACK IS WORTHLESS. HARMING THE FLESH ONLY ENRAGES IT.
THE FLESH HUNGERS. THE FLESH SEEKS. THE FLESH HATES.''”

Vorius Govardian was a Wranploer Warlord who became corrupted by the psychic powers of Regnatus, leading him to transform himself into a hulking abomination who served as the lord of the so-called Children of Synthesis. Formerly a common space pirate, he ended up getting his hands into a shard of the Machine God's body which held a fragment of his psyche, leading him to be indoctrinated and to create an army of hybrid monsters, with a single-minded goal of eventually transforming himself into a entire planet of corpses.

Vorius served as the Borealis Galaxy's first reminder that, even in death, Regnatus will continue to haunt its people for the rest of eternity.

Vorius was born and raised as a common captain of the old Wranploer Legion. He followed the ideals of General Volim with great zeal, seeing the General as a hero for his people. During a certain battle against the Zoles Imperium, Vorius had his life saved by another Wranploer soldier named Nookrul. The two of them would become close friends and would spend most of their time together on missions, sharing loot and kills. Vorius and Nookrul's relationship grew to the point they considered each other blood brothers.

When Falrik Zaarkhun arrived and reformed the Legion into the Borealis Consortium Network, Vorius was at first skeptical about it, but as time passed, he learned to embrace the new government has his own life quality increased. Sometime during the initial years of the Second Borealis Galactic War, Nookrul was abducted by the Alvino Brood and turned into an overly mutated slave drone. Vorius thought Nookrul was on his own missions, but worried for the fact he no longer gave news.

Following the end of the war and the beginning of the Ice Age, Vorius got into possession of a piece of Regnatus' remains. Little did he know, though, that this piece still held massive psychic power, which started to whisper and slowly indoctrinate Vorius. In a matter of two years, Vorius had gone completely insane and obsessed with the idea of "succumbing and ascending"; the shard instructed Vorius into building a processing machine not unlike those once used to create the living parts of Ascended-class Dreadnoughts, and he used it to combine the genetic codes of every Consortium Network race into his body, becoming a mutated monster in the process.

Vorius spread his experiments through his Wranploer remnant, converting more unfortunate victims into chimeras while absorbed more individuals, increasing his power and body mass. However, he managed to keep a low profile and remain hidden from the main power of the galaxy. During the Attero Dominatus, the one hundred Dominatus members of the Aurfaust PMC attracted Vorius after they had been hired to attack the Zoles homeworld of Zoleia. Intercepting them on their way, Vorius fought all one hundred of them and absorbed all of them one-by-one, vastly increasing his power and body mass. He would later be attracted to the Blak Kroozade, where he absorbed the nearly-dead Loron'Kikra Gratz'kaoz, and later took control over the damaged carcass of the Iron Fist.

Vorius would then be attracted into the Kvargo homeworld of Biavumd, the headquarters of the New Wranploer Legion, where he wanted to absorb Torrent due to his rare DNA. Attacking simultaneously to an infiltration mission of the Penumbra Unit, Vorius launched a relentless attack on Torrent's base which left it into ruins, devouring all the personnel he came across. When confronted by both Torrent and Vekaron, Vorius absorbed Torrent's perfect Kvargo clone as well as the Draconis soldier Soredus. This attack traumatized both Vekaron and Torrent and, following the attack, Vorius disappeared from sight as fast as he had arrived. Following this, Vorius had a brief and rather shaky alliance with Angazhar which lasted up to the end of the fifth year of the Ice Age.

During the sixth year of the Ice Age, Vorius' plan escalated and was revealed to the galaxy: his ultimate goal was to become as large as a planet, calling himself a World of Corpses, by using the biomass of the victims he had gathered. He wiped out entire worlds to do so, including the entirety of the Imalmah Hegemony, and even being betrayed by his Spawn of Vengeance lieutenant could not slow him down. Vorius would achieve his goal toward the last few months of 2796 and turned himself into the World of Corpses, where he then engaged in battle against the united military of the Polar Crystal Alliance and many of its allies. Despite causing considerable casualties to his enemies, the World of Corpses was eventually breached and the allied force invaded his interior.

Inside the World's core, the united army fought hordes of mutants while Vekaron, Wragrot, Kilchárunya, Vansenk, Kamaris Vorava and Kirlisir were sent inside Vorius' mind by Tuolog, where they engaged in battle against a fragment of Regnatus' psychic power. With Vekaron emerging victorious, the psychic fragment was destroyed and the shard which acted as the World of Corpses' conduit became inert, causing the entire mutant planet to die out. After the armies retreated, the World of Corpses was bombarded from orbit and annihilated; the surviving mutant thralls of the Children of Synthesis who were not at the World of Corpses when it was destroyed were reduced to animal intelligence, and eventually all died out of multiple organ failures, leading to the end of the mutants' schemes.

In his former life, Vorius was a common member of his people with no special characteristics. Upon achieving his 'ascension', however, the only trace of his former Wranploer identity was his overall body shape. As a mutant, Vorius was a hulking monstrosity composed of an ever-shifting, half-rotting mass of flesh and muscle, his body covered in the screaming faces of the people he had absorbed, all who were still alive and conscious, incapable of doing nothing but shriek out in horror over their current state. Due to his nature as a giant mass of corpses, Vorius is said to have an unbearable stench of death.

In his early days, Vorius was noted to be an archetypal Wranploer; arrogant, greedy and with a sense of superiority over other races. Once he was brainwashed by the fragment of Regnatus, most traces of his former identity were erased, and the hulking mutant now taking his name was little more than a puppet for the fragment, who displayed a single-minded desire to feed on flesh and grow in size and power. However, tiny traces of Vorius still existed within the mutant; mentions of his blood brother Nookrul caused the monster distress and temporarily stunned it, though it would only takes a few seconds for the Regnatus shard to regain full control again.

Vorius' mutant form was, for the most part, completely invulnerable to damage, as any attempt at harming it would cause it to simply remold itself back into shape. Contact with Vorius was also deadly, as the amorphous mass could stretch itself to snatch and absorb other creatures, adding them into itself; Vorius often displayed this ability by creating a mass of long tentacles to bludgeon his victims. The shard of Regnatus' hull within the flesh mass emitted a gargatuan amount of psychic energy which both protected Vorius and allowed him to maintain his form at all. In addition, this shard's powers granted the monster telekinesis and resistance to most Essences.

“Become part of me.”

“Note to self: STAY IN A HUNDRED PARSEC RADIUS FROM THAT FUCKING THING.”

“It seems we both know the joy of having other people inside us.”

“You're not the only one with a parlor trick, mutant.”

“Remember that you will die.”

“This is why genetic engineering is regulated in Dranvamus!”

“You consider yourself a higher being? Hrmph. Pathetic.”

Vorius, prior to his "ascension" 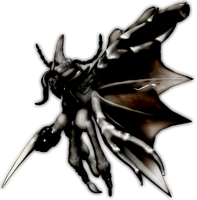