“The spirit of the Republic's people is the most powerful force in the galaxy.”

Vinchauk Il'Chahol is a male D'annaoí serving as an Admiral in the Navy of the New Cyrannian Republic, having previously seen service during the Great Cyrannus War as a captain of the United Republic of Cyrannus. A stoic and taciturn commander, Vinchauk is nonetheless motivated by a desire to ensure that the entire galaxy is freed from oppression wrought by forces such as the Galactic Empire of Cyrannus and the Cognatus and thus sees the New Republic as the best hope to ensure the fulfilment of this lofty goal. Vinchauk currently commands the Thirty Second Fleet from his flagship, the Praesator-class Star Destroyer Endeavour.

Vinchauk Il'Chahol became an officer in the Republic Navy a year before the Great Cyrannus War broke out across the galaxy. An efficient and no-nonsense commander, Vinchauk quickly ascended through the ranks until he reached the rank of captain and was given command of the Venator-class Star Destroyer, Liberty and Freedom.

During the War, President Apollo sent the Liberty and Freedom along with a small fleet of frigates to oust the Confederacy of Allied Systems from Corulus, which had been conquered earlier in the conflict. However, they were instructed that the likelihood of an invasion succeeding with such a small fleet available was doubtful, so Republic Command instructed them that the mission was a hit and run, to damage the Confederate forces before a large scale invasion could take place.

Surprisingly, the planet was defended by a smaller fleet than the one that conquered the planet in the first place, but it was still large enough to repel the small URC fleet. Acting quickly, Vinchauk Il'Chahol engaged a Munificus-class Frigate, while launching fighters to take care of attacking CAS gunboats. After a long dogfight, the Liberty and Freedom managed to destroy the Munificus frigate and began to prepare an invasion force to the planet, however, just as he was about to launch the ground forces, the captain noticed that a huge Confederate fleet was hiding behind Corulus' moon, ready to attack. Quickly, he ordered a retreat, as he didn't want to waste resourses on a doomed battle. He soon returned to Republic Command to tell his tale.

Several months later, he was assigned to join a task force to reclaim Corulus from the Confederacy, ultimately managing to turn the tide of battle toward the Republic, thus ensuring a key URC victory during the closing months of the war.

After the war, Vinchauk refused to join the Galactic Empire of Cyrannus on principle and quickly fled into the Unknown Regions to escape vengeful Imperial forces. Though he briefly came into contact with the nascent beginnings of the Cyrandia Resistance, he and the crew of the Liberty and Freedom remained independent of any official Republic remnant group, instead remaining in the shadows for the return of a more legitimate expression of the Republic's legacy. When the New Cyrannian Republic was formed, Vinchauk and his crew re-emerged and was eventually promoted to the title of Admiral. Though he retained his command over the Liberty and Freedom for several more months, he later received command of the Praesator-class Star Destroyer Endeavour.

“This is Admiral Vinchauk of the Endeavour. Power down your engines and your weapons and prepare to be boarded. Failure to comply will result in your immediate obliteration at my hands.”

During the final months of the New Cyrandia Wars, Admiral Vinchauk was assigned to defend the Osteola colony of Manannán where he would face what appeared to be an Imperial invasion. Gathering the planet's small defence fleet, Vinchauk led the charge against the invaders only to discover that it was in fact the Cyrannian Syndicate masquerading as the Empire in the hopes that the Republic would declare war. Upon the arrival of Imperial Grand Admiral Sarcophoneus, the two admirals combined their forces against the Syndicate and ultimately repelled them.

Several weeks later, Vinchauk was tasked with apprehending the leader of the Syndicate, Flovos Pretio, over Cianbur. Giving chase to Pretio's shuttle Fernei's Hand, the Endeavour travelled into the heart of an asteroid field and narrowly managed to capture the ship and its occupants. Upon Pretio's capture, Vinchauk interrogated him over the course of several days, the information gathered from which ultimately resulted in the New Republic declaring war against the Imperial State.

“This is Republic Admiral Vinchauk of the Star Destroyer Endeavour. Regellis vessels, you have entered New Republic territory in clear violation of the treaty signed by your Empress. Cease your aggressive act against the civilian ship or your ship and your crew will be forfeit.”

Some time after the end of the New Cyrandia Wars, Admiral Vinchauk was involved in an incident along the Republic's border with the Regellis Star Empire, though no shots were fired between the two factions. Instead, Vinchauk provided aid to the crew of the Falcon, a ship commanded by former Rambo operative Claire Rambo. Though the crew did not reveal their identities to the Admiral, he agreed to transport their injured passenger Ramikku Ramoval, a Rambo captain presumed dead after a run in with a Regellis starship. Bidding the Falcon farewell, Vinchauk set course to the Quadrant Galaxies, where he delivered Ramikku to the grateful Rambo government.

During the opening stages of the Second Great Cyrannus War, Admiral Vinchauk coordinated his fleet closely with the Grand Republic Fleet under the command of Fleet Admiral Willelmus Cretacea, who had fortunately survived the devastation of the Mou'Cyran Cataclysm. Fleet Admiral Cretacea directed Vinchauk to lead the Endeavour to Coruaan to lead the defence of the planet against the inevitable Imperial assault.

When the Empire finally invaded at the beginning of Martex 15 NE, Vinchauk displayed his characteristic mastery of space combat to destroy a significant portion of Admiral Tharnak Adraci's armada. When the Imperial Admiral Rela Loupál arrived at the battle in the Super Star Destroyer Empirical, Vinchauk begrudgingly ordered his armada to retreat, though not before punching a hole through the Imperial lines, disabling and heavily damaging the Empirical in the process. After the battle ended, Vinchauk was redirected to Coruanthor, though became fixed on liberating Coruaan from the Empire's clutches.

Admiral Vinchauk later played a key role in the closing stages of the pivotal Battle of Cyranduas, joining the armada of Admiral Quarantar in driving the Imperials from the Cyranduas system, and securing a decisive victory for the New Republic.

Though capable of showing emotion in certain occasions, Vinchauk is quite a stoic individual who is rarely seen succuming to emotions such as anger or joy, instead being purely focused on serving the New Republic and ensuring that the people who live in it are protected from the oppressive governments beyond Republic borders. Indeed, Vinchauk greatly distrusts organisations such as the Galactic Empire of Cyrannus and the Cognatus Empire and is strongly opposed to any interaction with them. Despite this, Vinchauk is also a gentle and kind-hearted being who enjoys the company of his crewmembers, even if he does not always show it. 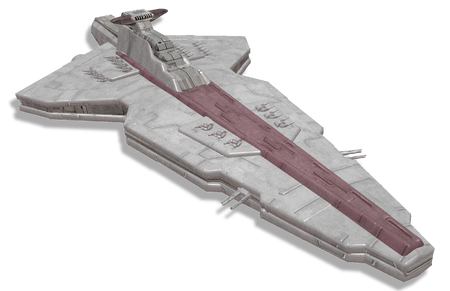 The Endeavour is the Praesator-class Star Destroyer commanded by Vinchauk, who gained control over the ship several months after his previous vessel was recommissioned. As a Praesator-class, the Endeavour boasts impressive shields, weaponry and engines and is capable of holding its own against far larger dreadnoughts. Like other vessels of its class, the Endeavour also excels as a diplomatic vessel in the event that Admiral Vinchauk is assigned to mediate a treaty between the Republic and an alien civilisation. 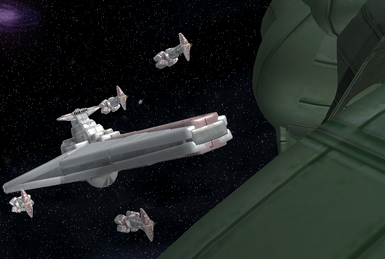 The Endeavour intercepts a Regellian attack on the Falcon.

“I am fond of your company.”

“His service to the Republic, both Old and New, is commendable.”

Retrieved from "https://spore.fandom.com/wiki/Captain:Vinchauk_Il%27Chahol?oldid=851649"
Community content is available under CC-BY-SA unless otherwise noted.