Valindor Palenix is a male Libertus who serves as a Grand Admiral of the Imperial Navy, commanding the Super Star Destroyer Executor. A native of Orbispira, Palenix served the United Republic of Cyrannus during the Intergalactic War and the Great Cyrannus War, where he gained a reputation as a patriotic supporter of the Republic and the righteousness of its fight against the Cognatus and the Confederacy of Allied Systems.

Upon the formation of the Galactic Empire of Cyrannus, Palenix, now an Admiral, had gained enough influence within the Imperial hierarchy that he openly protested the inclusion of figures such as Zillum and Tyrant—former Confederates and traitors in his eyes—to high ranking positions within the Navy. Palenix worked with the Phaedric Lord Venatorius and ultimately ousted Zillum from the Navy, ascending to the rank of Grand Admiral and gaining command of the Star Dreadnought Executor—the flagship of the Imperial fleet prior to the Imperatore.

A proponent of bold strategies and tactics not always favoured by Imperial Command, Palenix is nonetheless an Imperial patriot at heart who wields the powerful Executor in the Emperor's name. Nevertheless, Palenix is also considered to be a traditionalist—supporting the continuation of the Imperial Senate and the opening of the Empire to the Gigaquadrantic community.

A native of the galactic capital Orbispira, Palenix aspired to travel the gulf of space since childhood, holding onto this dream throughout adolescence and into his adulthood. Serving in a merchant fleet as a young man, Palenix ultimately joined the Republic Navy during the Trucinex War, where he aided in the defence of the Capricorn Sector Alliance from the invading Trucinex Imperium. Later serving throughout the Intergalactic War and the Great Cyrannus War, Palenix gained a reputation as a fair, though strict, commanding officer willing to go to great lengths to ensure victory for the Republic.

Upon the formation of the Galactic Empire of Cyrannus, Palenix was a strong critic of allowing former Confederates such as Zillum—who he considered to be a war criminal for his role in the destruction of many Republic worlds—ascend to such high positions within Imperial institutions, hating such figures with a burning passion. By the time he reached the position of Grand Admiral, he had ousted Zillum from the Navy and usurped command of the Executor under the guidance of the Phaedric Lord Venatorius.

Throughout the New Cyrandia Wars, Palenix served capably as the admiral of the Executor, though to his chagrin, never faced Zillum in combat. With the emergence of his rival on the throne of the newly formed Great Star Dominion, Palenix longs for the day he can turn the turbolasers of the Executor on the traitor and finally extinguish his light from the galaxy.

A few weeks after the outbreak of the Second Great Cyrannus War, Palenix coordinated closely with the Mornûnendur scientist Ekrillium, who opened a hole in the galactic barrier to form a wormhole leading directly to the Rambo Capital. Commanding a vast fleet from the Executor, Palenix travelled through the portal, arriving above the capital almost instantly. Though High King Rambert Ramveral protested, Palenix attempted to assure him that it was a contingency plan against a Republic attack on the Rambo protectorate. To ensure that Rambert remained loyal, Palenix held the Executor in geosynchronous orbit over Tirithsilliana, silently threatening it with the mighty Super Star Destroyer's cannons.

While Palenix remained at the Rambo Capital, he tasked Fleet Captain Sorondil with conquering the extragalactic territories of the Allied Terran Republic in Cyrannus. After the Incident at Noldágorel, Admiral Palenix contacted Grand Admiral Deoclet Caesarius, the driving force of the Imperial military, to inform him of the events, which had led to the death of an Imperial Inquisitor. Caesarius ordered Palenix to tighten his hold over High King Rambert, to prevent him or his government from acting against the Empire.

Several months later, when the New Republic Civil War came to an end with High King Rambert's open declaration of war against the New Republic, Palenix watched with satisfaction as the Empire's chief rivals in Cyrandia became consumed in war. In the aftermath of the fall of Rambo Nation to the Corruptus, upon the revelation that Rambert had been corrupted by Mar-Júun, Palenix, along with Grand Admiral Tector Decimius besieged the Rambo Capital, and brought about a formal end to the Nim-Glaré Concordat, and Rambo Nation itself, bringing it within the fold of the Empire.

Holding the rank of Grand Admiral, the highest within the Imperial Navy, Palenix is often regarded as a maverick among his fellow Grand Admirals, not as tactically brilliant as Tector Decimius, as ambitious as Carandial or as patriotic as Daeron Siruliulus. Indeed, lacking an interest in Imperial political intrigue, Palenix is a soldier at heart, willing to put his life on the line to protect his ship and his crew, if the situation calls for it. However, while he respects Emperor Tyrómairon, he does not consider him to be infallible, nor does he place much stock in the council of Mandators. Rather, he places his trust in the directives of Imperial High Command, which he serves admirably.

The Executor is the prototype Executor-class Super Star Destroyer, developed on Cyroenia by Tira Mizio and currently serving as the flagship of the Empire's vast Second Fleet. Once commanded by the feared warlord Zillum, the Executor became the most feared ship in the Cyrandia Cluster, in large part due to Zillum's genocidal campaign against Quadrantia species such as the Hutter, who were deemed subversive to the Emperor's will. Zillum's command over the Executor would end when he was usurped during a conspiracy orchestrated by Imperial High Command and the Phaedric Lord Venatorius. Subsequently, the Executor was placed under the command of Grand Admiral Palenix as the flagship of the Imperial Second Fleet. 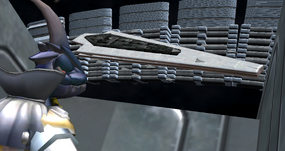 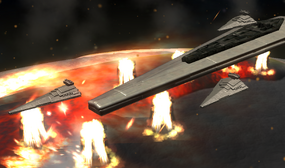 “Face the wrath of the Executor!”

“When next we meet, Palenix, I will snap you in half.”

Retrieved from "https://spore.fandom.com/wiki/Captain:Valindor_Palenix?oldid=766505"
Community content is available under CC-BY-SA unless otherwise noted.