“The Imperium shall survive no matter the cost!”

Emperor of the Draconid Imperium

Chaotic neutral
“The Imperium is a broken, decaying husk. I shall move a galaxy in order to preserve it, for I am its saviour.”


Uriel Ultanos is the Descended ruler of the Draconid Imperium. Coronated roughly a century before the Depression, Uriel has become one of Andromeda's most powerful immortal figures since the collapse of the Andromedan Galactic Commonwealth.

Since the early years of the Depression, Uriel has become both a saviour figure and an icon of worship in the broken Imperium, with scripture endlessly claiming how he liberated the Imperium from Drakon.

Uriel stands considerably taller than most Draconis, normally standing at a maximum height of 3.6 metres but he has been observed standing four metres or taller, particularly in battle or when facing down particular opponents. While his eyes were once a characteristic emerald green, the nature of his descension means his eyes are now an intense red, his scales are a dull amber with terracotta scales on his head and down his back. These scales press against large, clearly-defined and sinuous muscles. His teeth are serrated with a vestigial second pair behind the main row and his tongue is of a red as intense as his eyes.

Uriel prefers to wear a variety of bright clothing, when in public he prefers lavish outfits designed to impress while in more private circumstances prefers silken waistcoats and loose sleeves. In either case, he has a preference for hardened leather boots, the plates are generally set into the boot itself and the edges are trimmed with chromed steel.

Uriel has two sides to his persona; when relaxed he is polite, respectful and despite his stature and nature is often humble and understanding, secretly longing for the days he was once within equal standing with his people. Due ot his descension this has proven difficult as he fully understands that as a descended being he is more often seen as an entity of fear and death. When enraged or provoked, Uriel can be brutal and savage, perfectly comfortable to make his mark on the battlefield whether to inspire allies with his power or inspire dead into his enemies.

Whether calm or enraged is always determined to put his point across, believing that his motives are often misunderstood and seen as a distant figure uncaring for mortal life. In truth, Uriel still clings onto his passion for the people, even as he grows ever more distant and uncaring in their eyes he is constantly determined to prove he is not a villain.

As a descended being, Uriel does not need much in battle, nevertheless he is seen wearing spiked obsidian-black power armour that shimmers red at times of intensity due to the energies that flow between it and him. The body glove that once came with such armour has been discarded, replaced with a fibrous flexible armour plating that protects the exposed regions of his body. because the armour is bound to his soul, Uriel can not only summon and dismiss it or pieces of it at will, the plates will also shift their shape should Uriel change his physiology.

In battle uriel wields one of two swords that he can summon at will; his primary weapon is a great-sword with a four-metre-long blade tinted a deep red, arcanised with Descension energies. It is capable of reaching intense temperatures, the blade itself is sharp enough to slice though tank armour and starship hull plating, the added intensities generated by the blade can further melt these compounds or generate an intense field of heat around the blade, capable of cooking victims before they are cut. The blade itself is etched with ancient Dracid script, however oly Uriel himself understands the markings. The handle and crossguard are an obsidian black and marked with numerous coiled patterns, spikes and etchings.

The other weapon is a longsword with similar properties to the greatsowrd, but lacking the Dracid etchings and having a red, scaled grip. As with his sword and armour, the weapon can be summoned and dismissed at will. All three items, due to possessing pre-Depression manufacturing techniques and enhanced by Descension are incredibly resilient, bordering on unbreakable by modern standards.

Uriel is a descended being who has, over the course of almost a century, tempered his power to the point he has reached the "Controlled Demon" state. As a result he is an incredibly powerful being both on and off the battlefield. he has displayed traits of disease immunity, high resilience, a rapid healing factor, telekinesis, lithokinesis and pyrokinesis along with extra-sensory perception and immense strength, being fully capable of throwing battle tanks and creating shock wave-inducing blows with little effort.

Rumours persist of an ability to commune with animals, as exhibited by his attitude towards his two descended Krann, Sorlim, Gerium. Although this could easily relate to how he had descended the two long ago as hatchlings, thus possibly creating a parental link of sorts with the two Krann.

Uriel is immensely intelligent. A graduate of the Gran'Thar military academy he is a keen strategist and scholar, he is well-versed in both history and strategist. As one of the children born before the Depression, Uriel has benefited from an extensive education and now stands as one of the remaining "educated elite" of Andromeda. A warrior at heart, Uriel is immensely skilled with a variety of swords and firearms, with powers and sword-skills combined he has been seen taking on entire battalions of soldiers and even armoured columns and emerging victorious.

“We are the last bastion of Hope. We shall not fail”

“You either stand by me, or you stand against me”

“I will rend you asunder!” 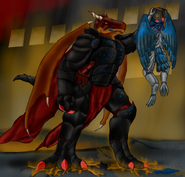 Uriel in his obsidian armour during Furia Ex Deus

“Father...what has happened to you?”

“If gods could shed tears, tears would be shed for this loss.”

“Some call him a fallen hero... he wasn't one to begin with”