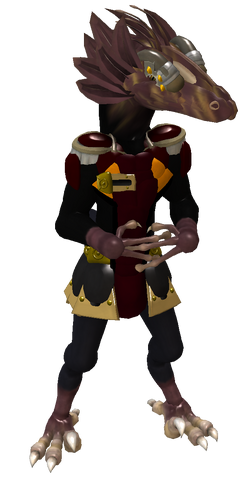 Tymonir Vargeryan is a male Libertus who serves as the captain of the New Republic starship Ardaeinos, a Constitution-class starship. Born on Taracondor in 14 BNE, Tymonir spent his formative years as a passenger on his parent's starship, a privately owned corvette on their exploratory voyages beyond the Outer Rim. With the rise of the Galactic Empire of Cyrannus, his family migrated to Coru Secundus, where Vargeryan gained entry into the prestigious Cyranamrún Naval Academy on Mou'Cyran.

In 08 NE, after four years in the Academy, Vargeryan graduated and after a brief stint as an ensign on the CRS Behemeth was promoted to the rank of sublieutenant, serving a tour on the CRS Valour under Commodore Thonaloc. Vargeryan's tour on the Valour was distinguished by his involvement in the Ramaprican Reclamation Campaign, which saw him faced with clandestine Imperial operatives seeking to disrupt the reclamation effort. Vargeryan was promoted to the rank of captain two years later, aided by the awards he had received for his service, including the Concordian Award of Excellence, First Class.

Vargeryan was assigned to the newly constructed CRS Ardaeinos, a Constitution-class starship developed utilising both Republic and Rambo technologies. Along with his dedicated and loyal crew, Vargeryan was often assigned to the most pivotal regions of Republic space and beyond, with the CRS Ardaeinos soon standing alongside the likes of the Republica and the Aeolus at the fore of the Republic Starfleet.

Born on the Mid Rim world of Taracondor in 14 BNE, Vargeryan was born into a family of esteemed explorers, with one of his ancestors being the first to map the pivotal Perliama Trade Run. Though born on Taracondor, Vargeryan spent much of his formative years on a small science vessel commissioned by the Taracondoran government to explore the unexplored reaches to the galactic west of the Outer Rim. Growing to become a trusted member of the crew in his own right, Vargeryan was identified quickly at a young age for his genius-level intellect, which fueled his passion for exploration and the pursuit of discovery within the vast blank corners of astrographic maps of Cyrannus.

While his parents were naturally non-political, they were horrified with the outbreak of the Great Cyrannus War and the subsequent establishment of the Galactic Empire of Cyrannus. Instead of returning to Imperial Taracondor, they fled to the Odysseia region of Cyrannus—home to mysterious powers such as the Icolian Assemblage and the Jenassian Regency, who while dangerous, were hostile to dark hand of the Empire extending into their region of space. Despite ingrained Jenassian distrust of aliens, the Vargeryan family successfully sought refuge on Jenassio, working as traders for three years before travelling to Coru Secundus upon the establishment of the New Cyrannian Republic.

Tymonir excelled in his studies, his experience on his parent's vessel aiding him immeasurably in astropolitic and astrography classes. In 04 NE, Tymonir successfully gained entry to the prestigious Cyranamrún Naval Academy on Mou'Cyran, where he majored in galactic cartography for four years.

Upon graduating in 08 NE, Vargeryan was assigned to the CRS Behemeth, a Venator-class Star Destroyer under the command of Captain Aeranyeos. A popular member of the crew, Tymonir nevertheless found himself dissatisfied with the endless border patrol missions, dedicating much of his down-time to combat training with both a blaster and a standard-issue energy blade. After a brief stint on the Behemeth, Tymonir—upon the recommendation of Captain Aeranyeos—was promoted to the rank of sublieutenant and posted on the Phoebus-class CRS Valour, under the command of Commodore Thonaloc.

While he occassionally butted heads with his commanding officer, Tymonir was trusted enough by Thonaloc that the Commodore assigned him to lead several away missions to the surface of the ruined planet Ramaprica, which had been devastated by General Zillum during the Great Cyrannus War. Aiding Republic figures in the historic Ramaprican Reclamation Campaign, Vargeryan utilised his combat skills to ward off dangerous mutated predators, his diplomatic skills to broker agreements with the growing refugee population and his newly acquired proclivity for subterfuge in foiling the operations of clandestine Imperial agents seeking to disrupt the project. For his efforts, Tymonir was awarded the Concordian Award of Excellence, First Class, by Senator Sola Naberraé.

In 10 NE, Vargeryan was recalled to Mou'Cyran, where at a ceremony attended by Captain Aeranyeos, Commodore Thonaloc and his parents, he was promoted to the rank of captain—an historically meteoric rise through the Navy—and assigned to the CRS Ardaeinos, a Constitution-class starship developed utilising both Republic and Rambo technologies. As one of the most advanced vessels in the fleet, Vargeryan was initially apprehensive about taking command, believing that the burden of command may be too much. Ultimately however, he found his confidence thanks in large part due to the lasting friendships he forged with many members of his crew.

“This is Captain Vargeryan of the CRS Ardaeinos. I hope we haven't missed the party.”

- Vargeryan, to Order and Alliance forces during the Battle of Fanaticus

The first major mission of the crew of the Ardaeinos was to aid the Unified Order of Cognalorilos and the Polar Crystal Alliance against the forces of the Cognatus Empire during the War of Cleansing. The Ardaeinos arrived just as the Cognatus under Xarn Senakh'tenre were about to destroy the allied fleet, with the timely arrival of the Republic armada ensuring an allied victory in the pivotal Battle of Fanaticus. However, unwilling to concede defeat, Warmaster Xarn annihilated the surface of the planet, killing billions of Eaglartin. After the battle, Vargeryan expressed his deep condolences on behalf of the Republic, pledging that if the survivors required aid from Mou'Cyran, they need only ask. After the war ended, Vargeryan and the crew of the Ardaeinos returned to Cyrannus.

During the Second Great Cyrannus War, Vargeryan was recalled from his involvement in the Pathfinder Project with Rambo Nation to aid in the defence of the New Republic from the Empire. Participating in multiple campaigns of the opening stages of the conflict, Vargeryan and his crew would emerge triumphant on many occasions, though it was only through the surprise defeat of the Empire during the Battle of Coruanthor that the Liberation of Coru Secundus began.

Serving under Fleet Admiral Laege Shavalera of the Third Fleet, Vargeryan and the crew of the Ardaeinos liberated worlds such as Venetia and Mossahraer, before joining the rest of Shavalera's fleet at the Second Battle of Thaehos, during which the Empire was pushed from the region. Barely a day later, he was tasked to aid in the defence against the traitorous Adelheidis' True Republic from gaining more ground in Cyrannus. Eventually, this campaign, orchestrated by Shavalera, pushed Adelheidis and her True Republic followers back into the Quadrants, and in so doing, sparked open warfare with Rambo Nation.

During the subsequent Battle of Pauvenris, the New Republic besieged the infamous Rambo slave world, liberating Laoi Cretacea from captivity. During the battle, Vargeryan played an instrumental role in destroying one of the Nation's prized Paragavatus-class super star destroyers. Several weeks later, by which point the True Republic had fallen to the Empire, Vargeryan led the crew of the Ardaeinos during the Battle of the Rambo Capital, during which he fought against those loyal to High King Rambert Ramveral, before being forced to retreat when the Empire dissolved Rambo Nation at the conclusion of the conflict.

During the Fall of the Twelve Worlds, Vargeryan and the crew of the Ardaeinos were stationed with Fleet Admiral Cretacea's Grand Republic Fleet in orbit over Capricaerón, and aided in the defence of the planet against the Empire's unexpected assault. When the battle turned sour, however, Cretacea ordered the fleet to retreat to distant Pelion, where Vargeryan was shocked to learn that only thirteen other vessels remained loyal to the democratic tenets of the New Republic. There, the Ardaeinos joined the ranks of the New Republic Remnant, with Vargeryan intent on emerging from this dark time and ultimately win the war against tyranny.

Highly intelligent and naturally inquisitive, Vargeryan has long sought to live up to his family's name by becoming a renowned explorer and starship captain. To Vargeryan, the unknown reaches of the Cyrannus Galaxy hide not only danger, but a trove of scientific discoveries waiting to be mapped. As the captain of the Ardaeinos, Vargeryan is well-liked by his crew as a thoughtful and efficient commander, who despite his easy-going nature, expects the very best from every crewmember of the vessel.

While Vargeryan prefers to seek non-violent solutions to problems, he is a skilled combatant who is not afraid of leading away missions on dangerous worlds, utilising his trusty blaster and antique energy sword in combat. Indeed, he is a regular sight in the gym of the Ardaeinos, training both body and mind in preparation for his next encounter with danger. Vargeryan's fondness for exploration, however, occasionally puts him in hot water with High Command, citing regulations which, in theory, prevent commanding officers from endangering themselves. To Vargeryan however, it is one rule he is comfortable with breaking, claiming that he would be a poor captain if he was unwilling to take the same risks as those under his command.

Vargeryan's foremost interest is galactic cartography, which he majored in while attending the Naval Academy on Mou'Cyran. Indeed, inspired by his forefathers who mapped the Perliama Trade Run, Vargeryan seeks to do what many once considered to be impossible and map the Unknown Regions of the Cyrannus Galaxy. Due to intense spatial anomalies and the ever-present danger of the Neraida Gigamatrix, such an endeavour is dismissed by many as foolhardy, though the wily captain of the Ardaeinos considers that all the more reason to try.

The C.R.S. Ardaeinos (RCC-001) is a Constitution-class Republic refit launched in 11 NE under the command of Captain Tymonir Vargeryan. The first Republic Constitution-class vessel developed jointly by Rambo and Republic scientists, the Ardaeinos was designed primarily as a vessel akin to famous exploration vessels utilised by Rambo Nation in the Quadrants. While the New Republic continues to pursue a naval policy dominated by large Star Destroyers and Battlecruisers, Republic Command has continued to fund multiple expeditions into the unknown of Cyrannus, the Quadrants and even into other universes entirely. The Ardaeinos represents the natural culmination of such expeditions, building on the successes of the Intrepid-class and the Odyssey-class. The Ardaeinos is also seen as a positive step in Republic-Rambo Relations, symbolising the thawing of relations since the Dark Times as the two factions cooperate more closely in the tense astropolitical climate of the Cyrannian Cold War.

“Keep up the good work.”

“My patience is wearing thin.”

“The galaxy would be a significantly better place if you stumbled into a black hole.”

“Vargeryan? Does he have Draconis parentage or something?”

“His arrival to the Battle of Fanaticus was much appreciated. I see the Republic's navy is in good hands.” 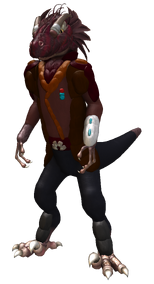 Vargeryan in his excursion gear.