“May the New Republic bring light to places where all other light has faded.”

Tyandas was a female Oiseau who served as a Fleet Admiral of the New Republic Navy, and later, a master of the Aldárae Order. A wise and sagelike individual, Tyandas was born almost a millennium before the events of the Great Cyrannus War and lived a life full of adventures and stories she shared with only a select few. As one of the highest ranked officers of the New Republic, Tyandas was a deeply respected figure both inside the Navy and amongst the citizenry of the Republic, who respected her devotion to maintaining peace through order.

Tyandas met her end during the Battle of Cyranduas, bravely defending the people of Cyrandas from the Empire's forces. She is remembered as one of the Heroes of Cyranduas, who gave her life in the defence of innocents, and in the name of the New Republic.

Born in 959 BNE on the galactic capital Orbispira, Tyandas' parents were originally native to the peaceful Oiseau homeworld but later moved to Orbispira to experience the beating heart of galactic civilisation. As a child and a youth, Tyandas was rather indifferent toward Orbispira and often dreamed of travelling the galaxy to find new alien races and learn the histories of beings whose exploits are both famed and forgotten. Throughout the early centuries of her life, this passion for exploration was quenched by her travels throughout the Cyrannus Galaxy, bestowing Tyandas with an understanding and respect for all creatures in the cosmos. When the United Republic of Cyrannus was formed, Tyandas decided to join the Starfleet of the Republic in the hopes that she could help sway the flotilla away from military might and toward peaceful exploration.

This attitude served her well, leading to her appointment as the leader of the Republic's forces in the newly explored Tigris Galaxy, where she secretly trained in the ways of Psionic Energy, earning her much respect from the natives of Tigris. During her travels, she became acquainted with Master Ryen. After her return to Cyrannus in 01 BNE, Tyandas was shocked when the Great Cyrannus War had ended with the rise of the Galactic Empire of Cyrannus. Refusing to have anything to do with what she saw as a horrible regime, Tyandas took to the shadows, where she would remain until the formation of the New Cyrannian Republic several years later.

“Fools, they would die for a hopeless cause? Full shields! Evasive manoeuvres!”

After the resignation of Captain Danakar after the Sacking of Rihanae, the now Fleet Admiral Tyandas received command of the Sword of Peace, a Praesator-class Star Destroyer. When the Republic briefly aligned with the Empire in opposition to the Cyrannian Imperial State in the final months of the New Cyrandia Wars, Tyandas was given command over the entirety of the First Fleet, coordinating it south of Republic territory, along the Imperial Neutral Zone and into Basileus space through the terminus of the Perliama Trade Route. Working her way north toward Vasuband, Tyandas won many victories, offering amnesty to Basileus citizens unwilling to join the Empire or fight for the State.

During the Siege of Vasuband, Tyandas coordinated the Republic fleet from the Sword of Peace, destroying many State dreadnoughts. In one final move of desperation, the State Admiral Chathanglas rammed his cruiser, the Martos into the Sword of Peace, causing considerable damage to Tyandas' flagship. Nevertheless, the strong shields of the Republic flagship held out and Tyandas survived to see the war's conclusion.

After the end of the conflict, Tyandas returned to Republic space. While the First Fleet was dispersed into various battlegroups throughout the Republic fleet, she retained command over them. However, upon the establishment of the Aldárae Order, she resigned her commission and travelled to Aldár and became a master of the Order, working closely with her old friend Ryen.

When the Second Great Cyrannus War erupted across the galaxy, Tyandas bravely answered the call of duty, working closely with her former colleagues in the Republic Navy, and turning the tide of many battles with her mastery over Psionic Energy. During the third year of the conflict, however, when fighting alongside Quarantar during the Battle of Cyranduas, she selflessly led the defence of Cyranduas City, comfortable in the knowledge that her own death was near. Along with those under her command, Tyandas fought tooth and nail against the Imperials, destroying great numbers despite the few under her command. Though she eventually fell in battle, she had successfully driven the Imperials off the planet—the Battle of Cyranduas was won, and Tyandas was celebrated as the Hero of Cyranduas.

Tyandas was an Oiseau, a bird-like race native to the Core Worlds of the Cyrannus Galaxy. Compared to other Oiseau, Tyandas was rather tall and thin with feathers that became somewhat duller in colour from the vibrancy of youth. Nevertheless, Tyandas had gleaming blue eyes that were described by many who met her as mischievous, though as quick as a flash they can also convey intense emotions bottled beneath the surface. Due to the unique biology of the Oiseau, Tyandas did not wear a standard Republic uniform but rather an eccentric set of robes of her own design.

Like many of her people, Tyandas was benevolent and wise in equal measure. Though at times firm and uncompromising, Tyandas always appeared to have an aura of serenity and calm and rarely displayed her emotions should they develop into anger or fear. Indeed, many question whether or not she has found her true vocation in leading armadas of deadly warships, though Tyandas preferred o see herself as an explorer and a scientist over a military tactician.

Kind and considerate of others, Tyandas' personality was such that many under her command consider saw her as something of a grandmother figure, always willing to listen to the problems of her crew to ensure that everything runs smoothly and that those serving on the Sword of Peace enjoy their time there. Despite occasionally indulging herself in self-congratulatory boasts, considering herself "cleverer than most", Tyandas was neither proud, arrogant or pompous despite her exceptional abilities. Unknown to many of her peers, Tyandas was a powerful Psionic, having learned the ways of the psionic arts on her voyages through the Tigris Galaxy. 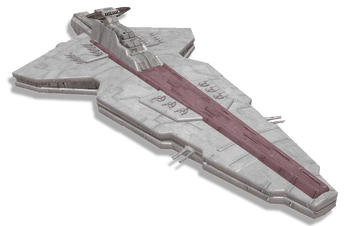 The Sword of Peace is the famed Praesator-class Star Destroyer commanded by Tyandas, who gained control over the ship after Captain Danakar retired from the Republic Navy after the Sacking of Rihanae. The lead ship of her class, the Sword of Peace boasts impressive shields, weaponry and engines and is capable of holding its own against far larger dreadnoughts. Despite its large size, the Sword of Peace has also proven to be quite nimble in combat, successfully evading fire from a Syndicate vessel during the Skirmish in the Neutral Zone in 04 NE.

Though a fearsome Star Destroyer, the Sword of Peace also excels as a diplomatic vessel and was the site of the treaty which solidified peace between the Galactic Empire of Cyrannus and the Confederacy of Free Planets in 04 NE. Later, the Sword of Peace was assigned to Admiral Willelmus Cretacea's fleet during the Sacking of Rihanae, after which it returned to Coruaan for a month in drydock before being reassigned as Fleet Admiral Tyandas' command ship.

The Sword of Peace holds position between the Imperial Star Destroyers and the Confederate frigates.

The Sword of Peace (bottom right) during the Sacking of Rihanae.

“May the heavens bless and keep you!”

“Your presence honours me!”

“I am not quick to deal out judgement.”

“A true paragon of what it should mean to be an officer of the New Republic!”

“Her wisdom is greatly appreciated.”

“She should be a diplomat or a priest. This line of work does not suit her.”