“Don't let the media personality fool you. Nijusi may seem like a generous benefactor - it's almost illegal to speak of him as anything else - but he has Tuuros by the throat. He isn't ready to slit it like Lord Zhuleshxi was; nothing could ever be as bad as Zhuleshxi. But Nijusi is close; he lets amorality and financial evils fund his lifestyle. If you're on his side, then good for you; don't expect to be too safe however.”

Tuk Nijusi is a Sumikian crimeboss, who is the head of the extensive Nijusi Syndicate. Arguably the Tuuros Galaxy's most influential individual, Tuk Nijusi has manipulated over a millennium of Tuuros' history through many illicit activities that have asserted his position as among Tuuros' wealthiest and most dangerous. With enough influence to manipulate the media itself, Nijusi is seen progressively as a benevolent figure within the Tuuros Galaxy, with attempts to unite the galaxy owed to his plans. Underneath however, Nijusi's hedonistic and cruel regime entails suffering wherever his hand stretches over, and all to him is merely an asset to control.

Born in the 5th century BC on his species' homeworld of Sumik, Nijusi's early years were amid tension of the Tuuros Galaxy under mostly what was considered The Congregation's rule. Although the Frontier had waged an equalising war against The Congregation within The Schism, the Sumikian Commerce Nexus became increasingly strained both in military strength and economic power due to frequent attacks from The Congregation itself; the Imi-Xal Sector, bordering on The Schism was prone to attack. Because of this, the Sumikians planned to divert much of their power across to the Xittan-Yaton Sector on the edge of the galaxy, of which was closer to their economic partnerships than the Imi-Xal Sector was. However, the Sumikians entered a civil war as the concept of abandoning their homeworld proved highly unpopular.

In the modern age, there are few who remember the history of Tuk Nijusi - whilst the Nijusi Syndicate have successfully manipulated the truth behind Nijusi's rise to power, that is through the lie of him being a Sumikian revolutionary during such strained times, Nijusi was in fact one of the original pirate lords of the Tuuros Galaxy alongside Eosi'i and Axshuai; the three founding members of the fabled Marecosi Coven of which was originally Nijusi's design. There is no accurate surviving record within the Tuuros Galaxy surrounding the years of Nijusi's rise to power, although rumours still survive of him having once commanded the largest pirate fleet ever known within the Tuuros Galaxy, larger than that of Axshuai's World-Eater Fleet. What is known among the closest of Nijusi's confidants and former acquaintances is that Nijusi acquired immortality through the means of mishandling Zhulultu technology several millennia ago; what has since been forgotten is that Nijusi formed the Marecosi Coven out of a bargain of power between Eosi'i and Axshuai.

The Marecosi Coven was, arguably, the single most powerful force within the Tuuros Galaxy aside from The Congregation and the Asilaphean Empire in its time, although Nijusi had covertly intended to supersede the notions of piracy. He had secretly created and diverted his client list towards the Vranntan; a species well known for their almost universal contempt for the rest of the galaxy. Employing vast numbers of the Vranntan, as well as also secretly observing Asilaphean and Nanusuloan imports (forging transportation documents in the process), Nijusi had formed a silent private military company that soon grew to form a sizeable military in itself. Having the Vranntan Order on his side, Nijusi staged a sector-wide coup that resulted in a large death toll, although he had successfully conquered the Xittan-Yaton Sector over the course of time between 1800 - 1802 AD. Deemed a terrorist by the fractured Commerce Nexus, the Sumikians suffered both another political and economic downturn as much of their trade routes were now under the control of Nijusi. Nijusi knew that the trade routes between him and the rest of Tuuros would not remain standing for long, and thus began to work through proxies and buffer zones to further distance himself and make his activities appear more legitimate. Though there is no stable evidence, nor enough of a consensus to warrant an arrest on Tuk Nijusi, many believe that Nijusi is firmly at the centre of multiple piracy and fraud crimes of many magnitudes across Tuuros, alongside arms, drugs and people trafficking.

Nijusi's monopoly on economic activity, both legitimate and piratical had strained his position with the Marecosi Coven to the point of breaking; the Coven is no longer considered truly functional down to his underhanded move to supplant territories in the Nexus. Despite this, Nijusi still operates in trade with piratical organisations and exists as the most feared name in the Tuurosian criminal underworld. The amount of wealth that Nijusi has generated over the millennia has also granted him the ability to manipulate foreign media; and, with the Tuuros Galaxy Theater Festival - which is in fact a misnomer for gladiatorial bloodsport, much of the populace now believe that Nijusi is a democratic benefactor for the better of the Tuuros Galaxy, although there are quieter opinions that deem him among the worst living individuals in the galaxy.

Standing of an average height for most Sumikians - that is to say, quite short, Tuk Nijusi is a surprisingly youthful looking individual despite his advanced age of over three thousand years old. Although he is perfectly agile for his species, Nijusi prefers to move about within a hoverchair of a particular ornate design commonly found in high-class Sumikian society, although it has been fitted with multiple advanced weapons in order to exterminate anyone who he may deem a unique kind of annoyance. He is known throughout the Tuuros Galaxy for his penchant for wearing an unusual hat and his preference of smoking. Nijusi keeps the facade of appearing elderly to the general public of the Tuuros Galaxy, although in truth he is in better form than most Sumikians in their prime.

As complicated an individual as most Sumikians, Nijusi is dishonest, manipulative and as Machiavellian as civilians of the Gigaquadrant come. As many see him as a benevolent dictator of sorts within the Tuuros Galaxy, only his trusted advisors are aware that Nijusi's antics are to fund his own greed and amusement, with those serving under him being able to share in his distorted utopian world view. Anyone outside of Nijusi's circle is deemed expendable and thus Nijusi places a gambling value upon their lives; within the Theater Festival itself, Nijusi often bets upon the contestants most likely to win. Those who fail Nijusi are often taken to be punished accordingly, though he is ultimately reasonable as long as he can benefit from it.

In his years as a pirate, Nijusi was an able combatant; piratical legend hails him as one of the galaxy's greatest artists of combat, sometimes held in a greater regard than his modern contemporary Ped Dijun. It is thought that several centuries of more sedentary activity has dulled his abilities in combat, although some believe otherwise. Several thousands of years of life in crime has rendered Nijusi exceedingly intelligent; Nijusi has crafted a strong and self sustaining economy over millennia of refinement and handling the galaxy into subservience and unfairness. Granted the worst circumstances for him, Nijusi does in fact have a mechanical combat suit he can enter to confront any combatant - although there are no reports as to what technology contains, many fear that there is in fact Zhulultu technology he has procured at some point to construct it.

"As long as you do what I tell you to do, you can have a slice of utopia all to yourself."

"You have made perhaps your most fatal mistake." 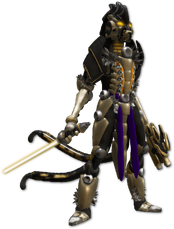 Nijusi as the Pirate King

“Dialogue is for those for who have already lost, Sumikian.”

“Rather undoubtedly, more intelligent than any other being in the galaxy. Unfortunately, intelligence is not the deciding factor in this galaxy either.”