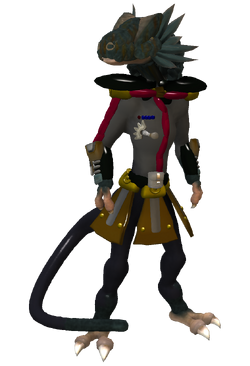 Galactic Empire of Cyrannus
“I fight for the glory of the Emperor and for peace and justice for the Empire.”

Titus Dromaeo is a Saurornithanta male officer serving in the Imperial Navy of the Galactic Empire of Cyrannus, commanding the Allegiance-class Heavy Star Destroyer New Order. A crafty and intelligent man, Dromaeo embodies many of the finest qualities of his kin, such as a keen mind and a desire to bring civilisation to the unruly regions of the cosmos. During the Second Great Cyrannus War, Captain Dromaeo was assigned to the Wormhole Campaign, where he worked to prevent the Republic's allies, such as the Mendel Pact, the Sacred Vanara Empire and the Waptoria Alliance of Species from providing aid to President Apollo's government.

Joining the Imperial Navy in 09 NE, Dromaeo was soon assigned as an officer on the Star Battlecruiser New Order, under Commodore Thaeliwaen, an officer whom he grew to dislike. Nevertheless, the wily Saurornithanta worked his way through the ranks and eventually became the science officer, and eventually, the executive officer of the ship. When Thaeliwaen retired from the Navy, she recommended Dromaeo to replace her as the captain of the New Order—a recommendation which came as a surprise to Dromaeo, who never suspected that Thaeliwaen valued his skills. Promoted on the eve of the Second Great Cyrannus War, Imperial High Command wasted no time in assigning Dromaeo to the Wormhole Campaign in the southern Unknown Regions.

There, he invaded the Sacred Vanara Empire-held world of Shaher, to blockade both the planet and the wormhole leading to the distant Mirus Galaxy. Through numerical superiority, Dromaeo won the day and began planning a strike against the Waptoria Alliance of Species and the Mendel Pact, before they could aid the fledgling Republic government being drafted by Apollo on Capricaerón. He would succesfully raze the Waptorian world of Malu'h'a, thereby causing it's vast underground caverns to collapse and destroying much of the Waptorian fleet in Cyrannus. Dromaeo would gain further notoriety among the allied forces by leading the Imperial forces at the Battle of Frenal, during which he was pitted against the Mendel Pact, the Sacred Vanara Empire and the Waptoria Alliance of Species.

Though he failed to utterly destroy the allied armadas, he nonetheless utilised the mighty cannons of the New Order to commence a Base Delta Zero bombardment of the planet's surface. Though he could not complete the bombardment, it nonetheless devastated Frenal and the Orgaat clans that made their home upon it, buying him time to evacuate Imperial forces off the planet in preparation for the next phase of the war.

Though considered to be a naval traditionalist, in that he finds the use of superweapons distasteful, Dromaeo is nonetheless regarded as something of a maverick within the Imperial Navy, more than willing to bend directives from Imperial High Command if he deems it necessary. Nevertheless, he is a loyal Imperial patriot more than willing to lay down his life for the Emperor and his grand Imperial order. Due to the influence of Basileus instructors at the Imperial academy on Abrion, Dromaeo has developed a hatred for extragalactic civilisations, longing for the day that the Empire rules triumphant over all within the Gigaquadrant. 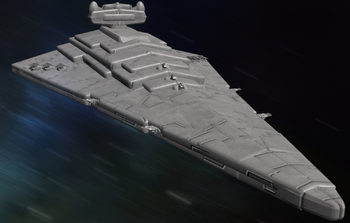 “Face the turbolasers of the New Order!”

“I will watch your career closely, Captain Dromaeo.”

“Yes, such rabble do support the true government of Cyrannus. Not only will such rabble grind your empire to dust beneath their feet, and I will personally pluck your feathers like a chicken, sweetie.”

“You have made an enemy of me, not wise. So I will hunt you to the ends of the Gigaquandrant and beyond. And when I have caught you I will destroy you, slowly.”