I protect the Republic and those who align to it.

“Wars are not won by talking.”

Thonaloc is a male Corthrinus currently serving in the New Republic's navy. Born in 45 BNE, as a young man during the Intergalactic War, his ship came under attack by a Cognatus patrol. Just as his ship was close to destruction, a URC fleet dropped out of hyperspace and saved the Corthrinus from certain death. Thonaloc, an honourable man, pledged his life to the service of the Republic, despite the objections of many of his own people back in the Corthrinus Empire. When the Corthrinus joined the Empire, Thonaloc remained a part of a Republic remnant faction and managed to protect it from constant Imperial attacks.

When the New Republic was formed, Thonaloc was pleased to join it despite having reservations about the strength of the newly formed Starfleet, believing that it should be used against any and all threats to the Republic, often bringing him into conflict with the more pacifistic members of Republic Command. Despite this, Thonaloc's skill in battle earned him the command of the newly constructed Phoebus-class Star Destroyer, the C.R.S. Valour, which Thonaloc commands with honour and distinction.

Born on Rinus in 45 BNE, Thonaloc grew up in a difficult environment. Despite his best efforts, he never received any respect from his parents, who considered him a total failure. By the time he came of age, he decided to leave without saying goodbye to his family and joined the battlefleet of the Corthrinus Empire the next day. Stationed on board a Corthrinus battlecruiser, Thonaloc experienced much battle during the Intergalactic War against the relentless armies of the First Cognatus Empire. During one of these battles, Thonaloc's ship was destroyed by a Cognatus warship forcing him and the surviving members of the crew into the escape pods, which were soon rescued by a United Republic of Cyrannus fleet which had arrived to aid the Corthrinus. Bound by honour, Thonaloc pledged to join the Republic despite reservations from his own people on Rinus.

As a member of the URC Navy, Thonaloc fought in many battles in the Great Cyrannus War, which ultimately cemented his respect for the democratic superpower, though the Corthrinus in him desired a more heavy handed approach to battling the Confederacy of Allied Systems. As a captain, Thonaloc took part in the cataclysmic Battle of Orbispira, the final battle of the war that saw the creation of the Galactic Empire of Cyrannus.

Unsure what to do, Thonaloc fled Imperial space with other pro-Republic captains, where they spent much of the Dark Times raiding Imperial shipments from a hidden secret base in the Antguverpern Sector of the Outer Rim.

When the New Cyrannian Republic was formed in 03 NE, Thonaloc once again felt a purpose in his life and joined almost immediately after the creation of the faction. Travelling to the unexplored Coru Secundus region of the galaxy, Thonaloc aided the Universal Trading Union in mapping and colonising the region on behalf of the New Republic. Soon afterwards, he was recalled to the new capital planet of Mou'Cyran, where he was put in command of the Phoebus-class Star Destroyer CRS Valour, one of the mightiest vessels in the Cyrannus Galaxy.

After gaining command of the Valour, Thonaloc travelled through the Saxhleel Wormhole to the Quadrant Galaxies, where he was stationed in the expansive Republic colonies there, particularly the region around the planet New Capricaerón. While there, he took part in the handing over of the ex-URC captain Xora who had been captured by slavers. Taking her to Mou'Cyran, Thonaloc hoped that Xora would be able to recover from her ordeal and join the ranks of the New Republic. While on Mou'Cyran, Thonaloc was called to a meeting by President Apaltar himself to discuss the current state of the ongoing New Cyrandia Wars. To his surprise and honour, Thonaloc was chosen by Apaltar to join his new Executive Committee to help the new Republic weather the storm to come.

However, Thonaloc would remain in command of the CRS Valour and was tasked to join the CRS Republica on a desperate mission to save the Homincyradae people during a Cognatus invasion of their homeworld. To his surprise, the Allied Terran Republic also arrived beforehand to rescue the Homincyradae, though it was only through New Republic intervention that the day was won. However, in a deadly broadside with the Cognatus flagship Tenebrous under the command of Thaur Vicliquam, the Valour was severely damaged and was left adrift. However, by the time the battle was won, the ship was once again under control and due to be towed back to Coruaan for repairs.

“Mr. President, I can translocate a couple of marines into the Senate Building at a moment's notice. Just say the word.”

- Thonaloc, preferring an aggressive approach to the hostage crisis

Prior to the Senate Hostage Crisis, the Valour had been in dry dock at the Shipyards over Mou'Cyran, allowing Thonaloc and his senior staff to venture down to the planet. While there, he was summoned by the President, who was reacting to the ongoing crisis. In the situation room of the Presidential Chateau, Thonaloc provided the President with tactical advise, recommending that a team of marines be sent into the Senate Building to kill the terrorists and rescue the Senators.

Such a course of action ultimately proved unnecessary however, when Master Ryen infiltrated the Senate Building and rescued the Senators, though was ultimately unable to prevent the destruction of the building. After the crisis had ended, Thonaloc was irritated, arguing that if he had his way, the Senators would be rescued and the building would still be standing. Putting these thoughts to the back of his mind, Thonaloc returned to the Valour for a four month exploration mission to the Notidruken Sector of the Unknown Regions.

During the Mou'Cyran Cataclysm, Thonaloc was on the bridge of the Valour as it transitioned to real space in the Mou'Cyran system, minutes after its destruction. He was thus the first to report to Fleet Admiral Willelmus Cretacea on the level of destruction visited upon the Republic by the Empire. During the Battle of Cadian, Thonaloc was tasked with protecting what remained of the system from scavengers and Imperials, and he would later participate in both the First and the Second Battles of the Mou'Cyran Remnants. During the Second Battle, he bravely commanded a small flotilla from the Valour, severely damaging the Imperial flagship Inexorable. However, the Republic fleet collapsed under increasing numbers of Imperial reinforcements, forcing them to retreat.

After the Liberation of Coru Secundus, Thonaloc remained assigned to Fleet Admiral Cretacea's Grand Republic Fleet, though was briefly assigned to command his own strike force when Agent Rhavor Aldorón proposed an invasion of Alberensis to drive the Imperials from the planet. Thonaloc's forces smashed through the Imperial defences and, coordinating with Resistance General Nilane Dhracari, liberated the planet from the Empire's claws. Meeting with Dhracari after the battle concluded, he expressed disapproval when she executed the Imperial governor, and returned to Capricaerón to link up with Cretacea's armada. He was later involved in the New Republic Civil War, joining Cretacea's fleet in the Battle of Pauvenris toward the end of the conflict.

Several months later, Thonaloc was present at the Twelve Worlds during the fall, bravely commanding the Valour during the conflict's most destructive stages. However, faced with overwhelming Imperial forces, Thonaloc was forced to retreat to the distant gas giant of Pelion, where the last Republic loyalist vessels congregated. There, Thonaloc joined with Admiral Cretacea, President Apollo and the commanders of the thirteen other vessels, to create the New Republic Remnant. However, he lost faith in the Remnant after the Battle of Cognalorilos, and instead pledged the Valour to the Revanchist cause, only to return to the fold prior to the Battle of Harborage in 20 NE.

Like most of his kind, Thonaloc has a fearsome and awe-inspiring appearance that commands the respect of his peers in the Republic Starfleet. To the surprise of many of who do not of his allegiance to the Republic, Thonaloc's appearance can also be very surprising with Claire Rambo and Corva being very surprised at the sight of a Corthrinus in a New Republic uniform when they encountered him during the voyages of the starship Falcon. Despite the shocked expressions of many that encounters him, Thonaloc does his best to ignore them, though also finds some pleasure in frightening those who don't show him respect by baring his ferocious teeth.

Like most of his kind, Thonaloc is an honourable individual with a strong code of ethics. For example; he believes that war should be conducted honourable and efficiently and seldom has any time for diplomacy being a strong believer in the dictum that actions speak louder than words, owing to his inherent dislike for politicians. Behind his gruff exterior however, Thonaloc is a kind-hearted man with a great sense of humour, a great affinity for Dvotties and a keen interest in classical Libertus music. However, he can be a fearsome sight when annoyed, a fact that his crew knows all too well, prompting them to work to the best of their abilities to avoid his wrath. 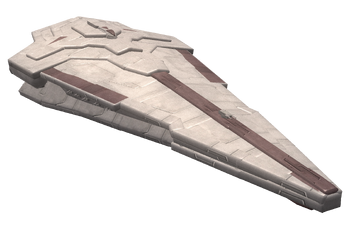 “Wow, I don't think I've seen a ship like that before.”

The CRS Valour is a Phoebus-class Star Destroyer under the command of Commodore Thonaloc serving in the Starfleet of the New Cyrannian Republic. Introduced in 03 NE at the Shipyards of Coruaan, the Valour was the 120th Phoebus-class put into service. Measuring 1,950 metres long, the Valour is one of the most powerful ships in the Cyrannus Galaxy, being able to go toe-to-toe with an Imperator-class Star Destroyer. Unlike the Venator-class, the Valour functions primarily as a command ship rather than a carrier, though it does carry a small wing of Viper Starfighters.

The ship saw battle during the crucial Amphryssos Campaign, where it was heavily damaged in a vicious broadside with the Cognatus flagship. After the battle, she was towed back to Coruaan for repairs, while the Commodore remained on Amphyrssos to oversee the formation of a new Homincyradae government.

“Come to the Valour and we will share a mug of Capricaerónn wine!”

“If I wasn't honour-bound to the service of the Republic...”

“Come any closer and I'll rip your arms off.”

“He's a good man, and proof that not all Corthrinus conform to the stereotypes.”

“Warriors have their uses in these dark times...”

“I don't know much about the Corthrinus, but I've always heard bad things about them. I'm glad he's not like what I've hard.”