Tharserion is a male Draken officer in service to the Navy of the New Cyrannian Republic, having previously served the United Republic of Cyrannus during the Great Cyrannus War. An intelligent strategist with a keen military mind, Tharserion commands the venerable Venator-class Star Destroyer Implacable, a vessel he has commanded since the early battles of the Great War. Tharserion is a veteren of key conflicts such as the Fourth Battle of Yudumarth and the Battle of Arnaorio, making him one of the most respected officers in the fleet.

Arriving at Yadumarth, the joint fleet began targeting the Confederate fleet. During the battle, the Implacable was spared from damage, as Tharserion mostly gave covering fire and later backed up the Senator which became badly damaged during the battle. The third battle of Yadumarth was a victory for the Cyrandia Alliance. Afterwards, he joined the month long blockade of Yadumarth, and upon Nirndal's arrival with the Terror of Stars and a massive Confederate fleet he was forced on the defensive. During the battle he managed to open fire at the Terror of Stars and lightly damaged her. However the Implacable also took light damage and after the Loyalist was destroyed he retreated together with the other ships. The fourth battle of Yadumarth was lost, and Therserion returned back to Cyrannus.

Upon arriving, the Implacable received repairs. After the repairs, Tharserion was sent to Arnoario, an ecumenopolis close to the galactic capital Orbispira. After the fall of Ramaprica, Tharserion grew worried that the Core Worlds were in danger, though most others believed it to be nonsense, as they believed the Confederacy was not that strong nor dared to attack them after their defeat at Capricaerón. A few days after the battle of Ramaprica the Serindia captain of the Serindia Utopia arrived with a fleet of frigates and a Mortalitas Dreadnought escort. Immediately, Tharserion engaged the Serindia Utopia but the Implacable also took heavy damage, together with another Venator class star destroyer. Shortly after the Mortalitas Dreadnought had crumbled and was destroyed, the Serindia captain of the Confederacy decided to retreat, which came to a surprise to Tharserion as the Confederacy had a good chance of winning the battle. None the less, he was happy with the retreat and filed a report to the URC senate, that the Core Worlds were in danger and Ramaprica should be retaken.

When the war ended with the rise of the Galactic Empire of Cyrannus, Tharserion briefly served in the Imperial Navy before deserting along with his loyal crewmembers, stealing the Implacable from the drydock and fleeing into deep space. There, he could travel the Outer Rim for three years before reappearing to serve the New Cyrannian Republic. During the New Cyrandia Wars and the early years of the Cyrannian Cold War, he was assigned to the defence fleet of Angrenos, where he fought against the Neraida Gigamatrix during the pivotal Defense of Angrenos.

Years later, he fought in the Battle of Coruaan during the opening stages of the Second Great Cyrannus War, during which the Implacable went up against the Empirical, an Executor-class dreadnought commanded by Imperial Admiral Rela Loupál. The Implacable survived the battle, though fled with the remainder of the Republic fleet to reinforce Republic defences at Coruanthor.

Noble, intelligent and possessed of a sound tactical mind, Tharserion embodies many of the qualities one would expect from a Draken aristocrat, though goes to great lengths to ensure that he remains on good terms with every single member of his crew, even those who he would otherwise have no dealings with during the everyday running of the Implacable. When he was first assigned to the Quadrantia fleet during the Great Cyrannus War, Tharserion distrusted Rambo Nation, fearing that their court intrigues would corrupt the democratic ways of the Republic. Ultimately however, he learned to respect and admire the Rambo as one of the Republic's greatest allies. In his free time on the Implacable, Tharserion enjoys playing board games with his senior staff, a ritual he believes maintain unit cohesion.

The CRS Implacable (VSD-15) is a Venator-class Star Destroyer of the New Republic Navy first commissioned by the United Republic of Cyrannus prior to the outbreak of the Great Cyrannus War. One of the first of the Venator Star Destroyers commissioned by the Republic Navy, Captain Tharserion has commanded the vessel since the earliest battles of the Great War and has continued to do so throughout the Dark Times, the New Cyrandia Wars and the Cyrannian Cold War. 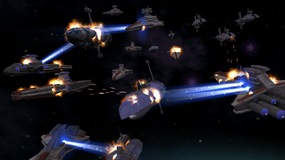 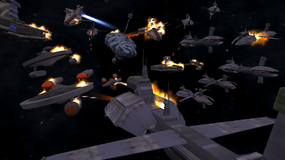 “You grate on my nerves.”

“It would be an honour to fight beside him once more.”