“Of all the entities damned by both the living and unliving, the one named Santorakh is the most diabolical. He does not care whether you are a peasant or a god. No matter what frame of time you live or have lived in, it is Santorakh's whim and joy to pluck you out of your own existence, and that is only the beginning of the horror. The rest of it is what he decides to do to you.” 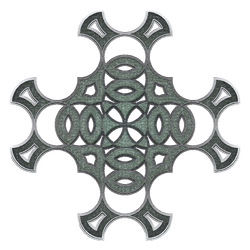 Ormenthdraverang, also known as Santorakh is one of the Xhodocto, the lord of Insomnia, and is revered as the god of madness by those who worship him. Arguably the most insane entity in all of existence, Santorakh's power and mind is limitless and incomprehensible. The culmination of his being is to bring madness and disorder upon everything and everyone - be it ally or enemy, and all who know him fear him accordingly.

Santorakh, despite the unpredictability and whimsicality that follows him, is perhaps the most well known of the Xhodocto after Angazhar. Though Angazhar has caused cataclysmic turmoil in the First Gigaquadrant, Santorakh's more fanciful nature generally defines his interest in individuals be they gods or primitive lifeforms. Since civilisation first existed in the universe, Santorakh has been present to steer the minds of others towards unstable and chaotic outcomes, and has long since been understood as a mad god; although to what extent has varied over time and throughout innumerable civilisations. Santorakh's interest in the so-called mortal domain is so intricate that the Xhodocto is thought to hide in plain sight; invisibly enjoying the nature of the First Gigaquadrant and forever observing its infinitely complex existence.

In the esoteric knowledge of Chaos, Santorakh is the embodiment and personification of abstraction; the very unpredictable nature of how all things unfold or converge, no matter how minor or great. Over the ages and perhaps vast universes that Santorakh has taken interest in, he has been regarded as a deity of all aspects and forms, although those that worship him most closely, known as draverians, worship him as the God of Madness. The ancient name of Santorakh, Ormenthdraverang, is directly translated to That Which Revels in Madness. His followers are truthfully demented and anarchic, to the degree where they rarely make an impression upon the Gigaquadrant due to their disorganisation. His own plane of Chaos, Insomnia is a reflection of the nature of Santorakh, and takes on the very metaphysical meaning of self contradiction, which includes even the denizens that have elected to reside there.

In comparison to the other Xhodocto, Santorakh is unique. The sphere of madness that he represents sets him apart in the laws surrounding the Xhodocto; he frequently takes on the appearance of mortals and speaks in their vernacular, and has a thinly veiled ignorance of reality. He is generally perceived as one of the malevolent Xhodocto alongside Angazhar, divisive scope Santorakh is a polarisation of Angazhar and is paired with Krathazhrukhal, and within the substantive scope, is also paired with Krathazhrukhal. Santorakh is, ironically (and perhaps befitting of his nature) a fundamental opposite of Krathazhrukhal despite their pairings, which is reflected in the conflict of their followers.

Of all the Xhodocto, Santorakh is the one that elects to manifest in forms both understandable and mind-destroying. Santorakh's choice of assuming simple forms is the defining trait of his character; although he is as powerful and devoid of definition as the rest of the Xhodocto, the other Xhodocto rarely choose to manifest in the same manner. Some believe that Santorakh appears differently to each individual, often based on their fears and desires. Though generally spoken of as masculine, Santorakh (like the other Xhodocto) are without gender and has been known to take on feminine forms.

Santorakh's eye - the forms of the Xhodocto regarded as their most powerful - is a fluid and formless mass vaguely resembling an unblinking eye. Due to his preference of taking on minimal forms, Santorakh rarely ever manifests to the First Gigaquadrant in this way. Some believe that gazing on any form of Santorakh greater than his weakest forms drive them mad; although some have said that even his simpler manifestations cause eventual insanity.

The very personification of the defiance of the axioms that build reality, no entity within reality or outside of it can truly ever understand the complexity and impermanence that is Santorakh. To many, Santorakh appears flamboyant, clown-like and idiotic when interacting with those he chooses to speak with; this is often a weakly masked facade that hides infinities worth of omniscience and unpredictability. Santorakh's desire to cause imbalance within the universe frequently manifests as malevolent and incredulous, and is sometimes thought of as a more negative influence than Angazhar in that respect. In truth, Santorakh has no knowable or substantial goal to his thoughts and actions. His concept of abstraction is even embodied in the disunity of the Xhodocto's followers; Santorakh has actively persecuted Angazhar's and Kratazhrukhal's followers and their own goals in the name of madness itself.

"Run along now. You've got something you ought to be doing. I don't particularly care what, but as long as you have fun while doing it, who am I to judge?"

"The universe will end in the same way it began; I've destroyed enough to know how it will play out. But this universe is so interesting...I don't think I actually want it to end yet."

“There are few entities in this existence that genuinely make me fear. Santorakh is one of them.”

“The encounter with this...abomination...was very close to Regnatus on the traumatizing scale. And that's saying something.”

“...But adversity doesn't simply exist as something to overcome. Ikara lays it on our path as a means for us to grow, as a chance for us to learn something new about ourselves. By moving through these lifelong obstacles, we begin to understand ourselves truthfully. And once our own image is clear, can we truly guide and nurture those who were not blessed.”

- An excerpt from the Sacrosanct Word, a collection of Ezesi'i religious texts