Ramthor was a male Serindia who served as a captain in the New Republic Navy.

Born in 27 BNE on the Rambo colony Koerband, Ramthor ultimately migrated to the Cyrannus Colonial Sector soon after the end of the Intergalactic War, where he found himself working with the Confederacy of Allied Systems, due to his mistrust of the United Republic of Cyrannus.

During the Great Cyrannus War, Ramthor served as the captain of the Providence-class Dreadnought Serindia Utopia in many of the most pivotal battles early in the war, including the Battle of Ramaprica, the Battle of Arnoario, the Second Battle of Nosiso and the Battle of Muunivelle. Earning a reputation as a capable commander and an honourable warrior, Ramthor would be gravely wounded during the Muunivelle campaign by a Republic soldier.

He would be rescued from this fate by Admiral Laege Shavalera, who treated the wounded Serindia on board his starship. Upon awakening, Ramthor was surprised that his enemy healed him and Ramthor pledged his loyalty to Shavalera, as his honor as a Serindia demanded it. He soon found himself as the loyal second in command of Fleet Admiral Shavalera, serving him throughout the Dark Times and the New Cyrandia Wars as a loyal officer of the New Republic. Upon the onset of the Cyrannian Cold War and upon Shavalera's recommendation, Ramthor was promoted to the rank of captain. Gaining command over the Praesator-class Star Destroyer Impavid, Ramthor is eager to protect the Republic, the Rambo and the ideals of the Old Cyrandia Alliance.

He was killed in the Great Battle of Orbispira in 20 NE.

Ramthor was born on the Rambo colony of Koerband in 27 BNE to a wealthy family of traders based out of Cardolast, considered to be one of the most beautiful settlements on the planet. Though his formative years were relatively happy, from a young age, Ramthor wished to explore the universe beyond the borders of his beloved Rambo Nation. Ultimately, Ramthor joined the Rambo Starfleet, serving as a lieutenant commander for five years. When the Nation became allied with the United Republic of Cyrannus, Ramthor was one of the many Serindia to migrate to the Republic as part of an exchange program in order to experience a different way of life. Over the years on Ramaprica, he began to grow suspicious of the Republic and became enamoured with the ideals of the newly formed Confederacy of Allied Systems.

Ramthor joined the Confederacy of Allied Systems when a group of 1200 Serindia decided to leave the United Republic of Cyrannus, to prove to their brothers and sisters of the Rambo Nation that the URC was corrupt and dangerous.

As a former navy lieutenant-commander in the Rambo Nation navy he was promoted to Confederate captain and was given the Providence Class Serindia Utopia to command. His first action was a massive attack at the Rambo and URC joined planet Ramaprica, the capital of the Rambo Cyrannus Sector. With a large fleet he attacked the young and experienced fleet at Ramaprica, and soon destroyed many URC Venator Star Destroyers, Miranda Class Battle Cruisers and two Victory Class Star Destroyers. When a Dagian captain of the USS Calypso ordered a retreat, many ship left, including the USS Salazar and a few Star Destroyers, but those who didn't want to face defeat were all destroyed by Ramthor's fleet. During the battle his ship was damaged by a Venator Class Star Destroyer and a Constitution Class, the USS Salazar.

After four hours of battle, as 03:00 am Ramaprica was under full control of the Confederacy, and Ramthor reported it to the Confederate Senate, and sent invasion troopers and battalions to the surface to secure the entire planet. He then began plotting a plan to attack more Core Worlds of the URC.

His first target was the ecumenopolis known as Arnoario. Taking a part of his fleet stationed at Ramaprica he engaged the URC fleet stationed there. Yet during the early stages of the battle his ship was damaged by the Implacable, commanded by a Draken captain. Taking heavy damage he also was informed that his escort, a Mortalitas Dreadnought was destroyed after being hammered at by a URC Venator class star destroyer and a Victory class star destroyer.

Still as a Venator-class star destroyer was destroyed, Ramthor knew he still had a chance to break the URC fleet. Yet it would cost a lot of ships of his own, and with arriving reinforcements his own fleet would surely not be able to hold Arnoario. As such the captain ordered to retreat back to Ramaprica, where the damage could be repaired and the Confederate forces could regroup. Afterwards he filled in a report and send it to the Confederate Senate to await further orders.

A month later, when General Zillum wanted to visit Ramaprica a large Cyrandia fleet arrived and started to engage Ramthor's fleet. When Zillum eventually arrived he destroyed Ramaprica, turning it into a lifeless and cold planet. He then retreated back to Confederate space.

Later on in the war he managed to conquer the Rambo Western Sector in secret, with aid of Senator Muunithrond his betrayal. However after the loss of the second battle of Nosiso and the intelligence provided by Claire Rambo the Rambo arrived with a large fleet, which later out turned to be a full Cyrandia fleet, having ships of the Cognatus, Hutters, Xiaans and the URC. After three hours of battle, with both sides taking damage Ramtor, was forced to withdraw back to Yadumarth, angered he ordered the retreat. The battle was fought over Muunivelle, which sustained damage due to crashing debris.

During the battle, Ramthor was injured by a Republic trooper and left for dead by his retreating troops. To his initial fury, he was rescued by Fleet Admiral Laege Shavalera, who brought him aboard the Arbitrator to recover—just as the Republic fell to the shadow of the Galactic Empire of Cyrannus. Though Ramthor refused treatment, he was too weak to fully resist, gradually growing to deeply respect Shavalera. When he learned of the rise of the Empire, Ramthor was horrified by the fall of the Confederacy—though the fact that both he and Shavalera shared a common enemy strengthened their bond. Ultimately, Ramthor would recover from his injuries and join the Arbitrator's crew as the Executive Officer; a role he served in both the Republic in Exile and the New Cyrannian Republic.

After the New Cyrandia Wars, Ramthor—now a loyal Republic officer—was promoted to the rank of captain by Fleet Command. Upon saying his farewell to Admiral Shavalera, he travelled to Scorpiae to attend a ceremony honouring him as the new captain of the Venator-class Star Destroyer Impavid, a powerful warship which served valiantly since the early conflicts of the Great Cyrannus War. Bemused that he would command a ship he once fought against in battle, Ramthor quickly acquainted himself to his crew and awaited orders from Command. His first test would soon present itself during the pivotal Battle of Bragolben Field during Da Reckoning, when the Impavid destroyed twelve Loron cruisers, much to Ramthor's pride.

During the Second Great Cyrannus War, Ramthor was assigned to one of the few fleets assigned to the north of Coru Secundus, which was seen as less vulnerable to Imperial invasion than the western sectors. During the Liberation of Coru Secundus in 16 NE, he tried to push back against an Imperial fleet led by the Phaedric Lord Maethoruin in the Imperial-occupied Mantillian Worlds, only to be pushed back by the power of the Executor-class Super Star Destroyer Dark Hand. After the battle, he retreated to Auethnen, reinforcing the northern sectors.

Years later, Ramthor participated in the Great Battle of Orbispira, hoping to put a final end to the Empire and see to the long-awaited restoration of the Cyrandia Alliance. During the battle, however, the Impavid was lost with all hands when it faced the guns of the Imperial Star Destroyers Accuser, under Captain Prentus and the Chimaera, under Captain Medé.

A capable commander and an honourable warrior in battle, Ramthor representd many of the finest qualities respected in the Rambo Serindia. Nevertheless, his distaste for the Senate of the United Republic of Cyrannus prompted his defection from the Cyrandia Alliance to the Confederacy of Allied Systems—a faction he respected even as a captain in the New Republic. When the Republic became the Empire, Ramthor grew fond of his former enemies, particularly Fleet Admiral Laege Shavalera and despite distrusting several of the New Republic's representatives, he remained loyal to the democratic ideals of the restored URC. 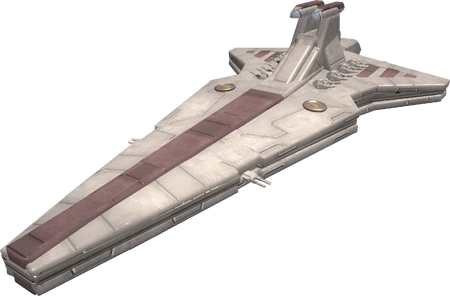 The Impavid was a Venator-class Star Destroyer in active service since 01 NE, making it amongst the last of its class to be commissioned at the shipyards of Cyroenia prior to the end of the Great Cyrannus War. Named after a Krakana-class starship of the same name which fought under the banner of the Cyrandia during the Great War, the Impavid fought in the Battle of Orbispira before retreating to the Quadrant Galaxies when the war ended, ultimately coming into the service of the Republic in Exile as a member of the Apatalore defence fleet. When her previous captain retired at the end of the New Cyrandia Wars, the Impavid was transferred to Cyrannus, where it became the flagship of the newly promoted Ramthor. It was destroyed under heavy Imperial fire in 20 NE.

“It is always good to see you.”

“Ultimate One take you!”

“Even though we found ourselves on opposite sides of the war, we were never truly enemies. I regard him as one of my dearest friends.”

Retrieved from "https://spore.fandom.com/wiki/Captain:Ramthor?oldid=860454"
Community content is available under CC-BY-SA unless otherwise noted.