“Peace and justice are the ways of the Republic.”

Onon Vebbar is a male Mon Nahdar who serves as a captain in the Navy of the New Cyrannian Republic, commanding the advanced Phoebus-class Star Destroyer Concord.

Born on the Galactic Capital Orbispira in 33 BNE, Vebbar joined the navy of the United Republic of Cyrannus at a young age where he served as a lieutenant on the Venator-class Star Destroyer Allecto in the Quadrant Galaxies during the Great Cyrannus War. After the war, he was promoted to captain as a member of the Republic in Exile and later the New Republic. A clever tactician and strategist, Vebbar is well respected by fellow officers in the Republic Starfleet.

Born on Orbispira in 33 BNE, Vebbar grew up in a family of strong Republic patriots loyal to the Cyrannian Senate. This imparted on Vebbar at an early age with the positives and negatives of democracy and how it is an ideal worth fighting for. As such, Vebbar enlisted in the Republic Navy at a young age where he impressed his superiors to the point where he was promoted to the rank of lieutenant as the first shots of the Great Cyrannus War were being fired. Serving on the Venator-class Star Destroyer Allecto under Captain Nerazachi, Vebbar saw action as a helm officer during the Battles of Yudumarth and Muunivelle before the end of the war brought about the end of the Republic and the rise of the Galactic Empire of Cyrannus.

Like the rest of the crew of the Allecto, Vebbar had no intention of joining the Empire and instead remained loyal to the Republic in Exile in the Quadrant Galaxies, where he remained for three years. During these years, the shortage of personnel coupled with Vebbar's skill as a commanding officer led to his promotion to captain. Commanding the Arquitens-class frigate Peacemaker during this period, Vebbar became known as a great officer to the point where he was given command of the highly advanced Phoebus-class Star Destroyer Concord upon the establishment of the New Cyrannian Republic in 03 NE.

During the New Cyrandia Wars, Captain Vebbar and the crew of the Concord were assigned to border patrols for much of the conflict, only to be assigned by Fleet Admiral Tyandas at the end of the conflict to participate in the Siege of Vasuband against the Cyrannian Imperial State.

Several months after the end of the New Cyrandia Wars, Captain Vebbar was informed that Republic Senator Aneen Daerethal had brokered an agreement with other members of the Lianna Initiative and the Unified Order of Cognalorilos to liberate Concordia from the clutches of the oppressive Cognatus Empire. Leading the Republic fleet in the ensuing battle, Captain Vebbar would travel down to the planet's surface when the Cognatus warfleet under the command of Toras Pargo'jakun was routed. There, he helped coordinate the liberation of the capital city of Cynaserine. After the battle, Vebbar travelled to the nearest Republic shipyard to oversee minor repairs to the Concord.

After the Concordian Liberation, Vebbar was assigned border control in the contentious area of space bordering the Jenassian Regency. Serving in this capacity for several months, Vebbar would later be assigned to the Andromeda Galaxy when word reached Republic Command of a shocking discovery in the Exterioris Sector. Hoping to work closely with the native powers to understand the mysteries of the object, Vebbar would be joined by Republic xenoarchaeologist Dané Elenya, who also sought to understand the Voidwalker.

“All ships, coordinate with the Concord and fire on these coordinates. Full turbolaser spread.”

- Captain Vebbar during the Battle of the Temporal Gateway

Some time later, Captain Vebbar and the crew of the Concord were redeployed to Cyrannus, where they saw service during the Neraida War. Vebbar and his crew served admirably during the Battle of Coruanthor, though the Concord was damaged by a Neraida plasma torpedo, necessitating repairs provided by the Phoenix-class supercarrier Spirit of Freedom. Though the Concord was not involved in the initial push into Neraida space, it rejoined the allied task force three weeks later.

Upon arriving in Neraida space, Captain Vebbar was reintroduced to Doctor Elenya, who had joined the crew of the Concord in an unofficial capacity at the behest of the Republic Xenoarchaeological Corps, who sought to uncover more Oikoumene and Nagith technology in the aftermath of the discovery of the Girithion Dyson Sphere. Assigned by Fleet Admiral Cretacea to coordinate with the Indoctrinate Collective Commandant Gavakar, the two commanders fostered a close working relationship, which aided them immeasurably when they discovered a temporal gateway in a nearby system which the Neraida were preparing to use to rewrite history.

During the subsequent battle, Captain Vebbar and Commandant Gavakar managed to destroy the small Neraida fleet defending the gateway and after a continuous period of firing all weapons, finally collapsed the portal before fleeing before the resultant shockwave could destroy their fleets. Upon returning, Vebbar and the crew of the Concord were congratulated for their service, though were informed that the Terrans had made contact with a species known as the Aevarin, who held the key to the Neraida's ultimate defeat.

Over a decade later, Vebbar served in several of the opening battles of the Second Great Cyrannus War, working to prevent the fall of the Coru Secundus region into the Empire's hands. However, after the New Republic's decisive victory at the Battle of Coruanthor, Vebbar was assigned to border patrols along the Republic's secure eastern borders, and thus did not experience many of the most trying moments of the Republic Civil War. However, by 17 NE, Vebbar had been assigned to Fleet Admiral Gialu Kaedar's armada, and participated in the battle to prevent the fall of the Twelve Worlds to the Empire.

After the battle, Vebbar joined the New Republic Remnant, though he and his crew elected to leave the group following the disastrous defeat at the Battle of Cognalorilos. Instead, Vebbar pledged his loyalty to the Revanchist cause, believing they had a better hope of defeating the Empire. Ultimately, however, the Revanchists themselves rejoined the Remnant prior to the Battle of Harborage, prompting Vebbar to seek forgiveness from his old allies.

A true loyalist to the New Cyrannian Republic, Vebbar desires to achieve a galaxy free from war and oppression, viewing civilisations such as the Galactic Empire of Cyrannus as great obstacles to achieving this goal. Unlike Gialu Kaedar however, Vebbar does not support a war between the Empire and the Republic, believing that the Republic can only be victorious by stealing the hearts and minds of Imperial patriots away from the Emperor and toward the traditional Cyrannian institutions of the presidency and the Senate. As an officer, Vebbar is loyal to those under his command and those who command him while to his enemies he is unpredictable and prone to utilising unconventional strategies to achieve victory. 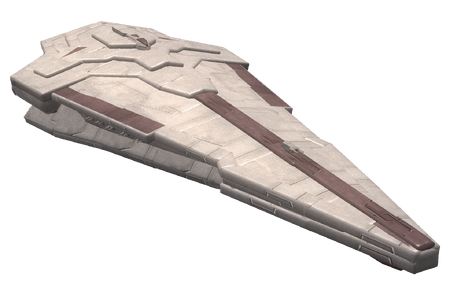 The Concord is a Phoebus-class Star Destroyer in service to the New Republic under the command of Captain Vebbar. A powerful example of a Republic warship, the Concord is powered by a black hole singularity, giving it almost unlimited power, turbolaser output in the petaton range and a hyperdrive which can work without stopping. Fueled by exotic matter, its negative mass makes space warp around it more effectively. The hull has been strengthened with hyperdense neutronium, found only on neutron stars while it is equipped with nonphasic shields and a phase cloaking device. Though introduced in 04 NE, the first major engagement involving the Concord was the climactic Siege of Vasuband, the final battle of the New Cyrandia Wars.

“What would you ask of me?”

“You have my trust.”

“An impediment to galactic progress.”

“It makes me feel quite old to think that my old helm officer is now captaining a Star Destroyer!”

Retrieved from "https://spore.fandom.com/wiki/Captain:Onon_Vebbar?oldid=852357"
Community content is available under CC-BY-SA unless otherwise noted.