Leader of the Vengeful Claw

“I know not who she is, but one thing about her is certain: she died the moment she turned her back on us. We will never forgive terrorists.”

Old Fang, real name Draikilia Charil, was a Dracogonarious female who served as the leader and mastermind behind the Vengeful Claw, being its original founder and ruler after she rebelled away from the Dracogonarious Empire alongside large numbers of followers. Named for her elongated fangs and her old age, the Old Fang was one of the main threats to the stability of the Indoctrinate Collective thanks to her sabotages and terrorists assaults.

Believing herself abandoned by the rest of her people, Old Fang dedicated her life to prove the Collective was not the saintly paragon it made itself to be in galactic affairs, and wishes to depose it of its ruler in order to bring it to a new era under the control of the people; her people. Manipulative and not afraid to make sacrifices, Old Fang is no mere petty criminal, for her mere existence is a major threat for the Indoctrinate Collective's future.

The woman who would be later known as Old Fang was born under the name of Draikilia. Born at the Dracogonarious Empire, she would grow up to become a space captain and eventually became a companion of Drakley Charil. over the years, the two of them became romantically involved, with Draikilia recalling their first date being around the Earth year 2179. They would spend the rest of their days together and had a son named Jerkon, until the war with the Marinox, where both Draikilia and Drakley led the Dracogonarious and their allies during the Battle for Planet Kaizox. During the battle itself, Draikilia was wounded by Commandant Karnak who cut her left eye out and then kicked her into a pit. Not being found and rescued by Dracogonarious forces, she was deemed killed in action after the battle is over, though Draikilia did survive. She was forced to use rudimentary medical tools to not bleed out completely and eat Marinox meat to sustain herself, until she was found and rescued by a Dracogonarious medic with large claws who was also left behind.

Draikilia and his medic companion were eventually rescued by Spinker researchers who visited Kaizox about two days after the battle and taken back to the Dracogonarious Empire. Filled with hatred for being left behind by her men and seemingly by her husband, Draikilia started a revolt in the Empire, considering it wrong and abusive for its people. She renamed herself Old Fang and named her movement the Vengeful Claw after her medic companion, who was killed by Dracogonarious Empire marines. Old Fang would only learn of Drakley's death several decades after her revolt started, which made her feel guilty of her actions until she convinced herself that the Dracogonarious Empire also left Drakley to die at Kaizox, which was clearly not the case.

Old Fang was hit by nightmares from Shu'ytrogarva during the Second War of Black Fog, when she learned that the Dracogonarious Empire was under attack from the Marinoxidiz and the Corruptus. Keeping to herself at first, Old Fang would later start studying means of harnessing Nightmare Energy to use it against the Dracogonarious Empire to surrender it. However, her experiments would eventually turn against her and she was forced to join forces with Jerkon and his team to survive. Following this, Old Fang reluctantly joined forces with the Dracogonarious Empire for the remainder of the war, offering war assets and support against the demons of Shu'rimrodir. Despite her feud with Jerkon, she made no indications of being his mother, preferring to not comment about it.

During the War of the Ancient Three, Vileraz IV sought to spread chaos across the allies of the Polar Crystal Alliance, and decided to disrupt the Indoctrinate Collective by getting in touch with the Vengeful Claw and funding an all-out assault against the homeworld of New Draka. While initially successful in taking the leadership of the Collective hostage, the Old Fang was defeated and captured by the efforts of Jerkon, Herquie and Kezoreg, leading to her being executed for treason and terrorism.

Old Fang appeared a female Dracogonarious with a mechanical eyepatch on her left eye socket, which glowed in an intense blue light. This eyepatch was placed to replace Old Fang's eye, which was lost to Commandant Karnak during the Battle for Planet Kaizox. Other than this and her outfit, Old Fang's appearance was standard to that of any female of her face.

Old Fang was considered immoral by Dracogonarious standards. She was indifferent toward committing crimes, murder and chaos to achieve her goal of bringing her species to a new era. She considered the Dracogonarious government oppressive and stagnant, wishing to make it more pro-active and overall more aggressive than it was. While seen as evil by other Dracogonarious, Old Fang was not exactly malevolent, as she has arguably good intentions which could potentially help her people, but her means of achieving such were not the best possible. Old Fang also deeply cared for the few allies she had, especially Kaeron Vangardus, who she considered a second son.

Old Fang had no special abilities other than being extremely intelligent like all Dracogonarious. Her training under the military made her adept at using assault rifles as her weapons of choice, and she made an excellent leader and strategist.

“Relationships are mostly a burden.”

“The future demands a change in your life. "Alive" changed to "deceased".”

“You lived and died for nothing, like a nobody. Exactly what you deserved.” 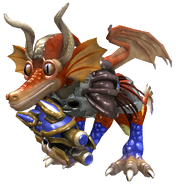