“How to best describe Nalashtannylor? The charge in the air. The impossibility of the weather. The beauty and sharpness of the winter. The very instance of sunset and the fall of the night. The calmness of the stars and the eternal wrath of the stormy seas. Nalashtannylor is all of these things. He is change, and he is immovable. He is the light and the dark. He is both life and death; our ever vigilant god that watches over us. Woe on those who betray his trust.”

Nalashtannylor in himself is considered the worst enemy of Caligaduro Provectus, of who the two have clashed in an endless struggle for the survival of the universe. He is treated with both admiration and envy by the Simulacra who have assisted him in the past - as well as one that no being, mortal or not, should cross.

The Festival of Nalashtannylor is 17 Crepuscular Light.

Nalashtannylor as a name in fact refers to three distinctly separate entities of whom have been mantled as the Simulacrum of Purity. The first of which, Aethereus, existed in complete harmony with his counterpart, Soldalatel. Aethereus and Soldalatel in the ancient world were mostly attributed with the creation of the universe through cosmic interaction, although this was a belief of the Orichalcum Elf Imperium. Aethereus and Soldalatel were said to have created the Echdrarothrayu, Sun Drakes and Storm Drakes. Under the guidance of Aethereus, the Echdrarothrayu aligned to him taught language and agriculture to the cultures of the north, and the Néva, one of the oldest extant cultures surviving, came to worship Aethereus under the name of the Night Father. Aethereus however, had met his end at the turn of 30,000 BNA by the hands of Caligaduro Provectus - knowing that no god can be truly destroyed, Caligaduro Provectus ensnared Aethereus and trapped him in the realm of Nothing - hollowing out the god's soul until its smallest possible fraction remained. The being that was Aethereus strayed out of conscience and thought, leaving only this fragment behind.

Nalashtannylor is widely accepted as the most benevolent of the twelve Simulacra, however like his counterparts, still pertains to dealing in absolutes. His spheres revolve around purity and protection, and thus those who are said to have Nalashtannylor's blessing have their souls personally watched over by their god. He, like Mortium has a particular aversion to the undead and the void, though he himself is often defined as a god of rebirth and immortality. As also a god of truth and wrath, the ultimate crime against Nalashtannylor is a betrayal of his trust, which historically has been paid for in the complete and utter obliteration of those who transgress against him. Nevertheless, Nalashtannylor is among the most watchful and protective of his followers and servants - the spheres he represents indicate him as unrelenting with an unchangeable law.

Those which worship Nalashtannylor in monotheistic terms describe him in many ways as great or greater than (or even the incarnation of) Isiris - sometimes describing him as the Simulacrum of the Aethereal Firmament (although a tenuous remark). Those who worship him as such sometimes name him as the Nine-Faced God; a deity that has nine names and encompasses all walks of morality and order - there, Nalashtannylor is both a part of and distinctly separated from good, evil, order and chaos. In relation to Isiris, some regard Nalashtannylor as either the incarnate soul of Isiris, a father-entity to Isiris or Isiris' guardian. In relation to Soldalatel however, Nalashtannylor is generally regarded as the twin-entity of where Nalashtannylor represents the darkness whilst Soldalatel represents the light.

Nalashtannylor, through his incarnation as Aethereus is the patron deity of storm magic (aetheromancy), a magical equivalent and cosmological opposite to sun magic. Usually thought of as one of the 'three fundamental magics' by the Orichalcum Elves (sun, storm and darkness), Nalashtannylor's power extends outside of the spheres of the Simulacra when referred to as Aethereus (or Kaur-arān) for that matter. Strongly associated with the more ethereal elements of the universe, such as the weather, governance of the moon and power harnessed from the stars above, Nalashtannylor's dominion over this power of magic makes him among the most feared enemies of the Chaosphere, with the power to eviscerate evil wherever it rises. As a fundamentally 'light' aspect of magic, he is at times untrusted by the other Simulacra due to their strong associations with darker magic. Due to the nature of the Aether Emeralds (attributed to Aethereus), Nalashtannylor is also associated with darker magic - which intertwines with his nature as a Simulacrum. 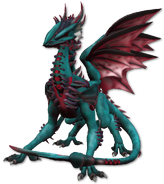 "My blessing you have; be it that you carve your own destiny, you shall do so with my gaze."

"We stand immovable in this moving world."

"All paths converge. Yours has converged with mine."

"Fall towards infinity, and it shall be by my doing."

“A valuable ally against the Adversary and his rabble. Of the other Simulacra, he is the one I have desired the soul of the least.”

“MINE IS THE ONLY TRUTH.”

Retrieved from "https://spore.fandom.com/wiki/Captain:Nalashtannylor?oldid=742244"
Community content is available under CC-BY-SA unless otherwise noted.