Captain of the C.R.S. Mou'Llhei Star

“If we want freedom, we have to make sacrifices. We have to fight for it and protect it. If we do that, I know we can win. The Empire may be powerful, but they lack the spirit which makes the Republic something worth fighting for.”

N'vae Celeneos is a female Alavar who serves as the captain of the C.R.S. Mou'Llhei Star, in the Starfleet of the New Cyrannian Republic. Headstrong, shrewd and compassionate, Captain Celeneos is among the best of the Republic fleet, notable for her ingenious strategies and faith in her small, though powerful, Aether-class corvette. During the Neraida War, Celeneos gained notability as the first commander to witness the Neraida's opening assault against the Republic, fleeing the destruction of Ithirebor and ultimately joining Fleet Admiral Willelmus Cretacea's armada which pushed into Neraida space, where it defeated the Neraida.

Promoted to Fleet Captain, Celeneos continued to serve in the Navy during the Second Great Cyrannus War, where she received a commendation for bravery for her efforts to repel the Empire during the First and Second Battles of the Mou'Cyran Remnants. After the Fall of the Twelve Worlds, Celeneos remained loyal to President Apollo, becoming one of the first members of the New Republic Remnant.

Born on the Core World of Corulus in 18 BNE, from a young age, the young N'vae longed to sail the starlanes on her very own starship, exploring new worlds, meeting new aliens and adventuring in the unexplored reaches of the Cyrannus Galaxy. When she came of age, she travelled to the Republic Naval Academy on Melainon, where she excelled as a student before graduating during the final year of the Great Cyrannus War. When the war ended with the rise of the Galactic Empire of Cyrannus, Celeneos fled to the Republic in Exile in the Quadrants. There, she was commissioned as a lieutenant in the Exiled Republic fleet, serving on the Senator-class Battlecruiser Arbitrator under Admiral Laege Shavalera.

Continuing to serve on the Arbitrator upon the formation of the New Cyrannian Republic in 03 NE, N'vae would serve two tours of duty before her promotion to the rank of Commander in 07 NE. Assigned to command the C.R.S. Mou'Llhei Star, a newly constructed Aether-class corvette, Celeneos quickly became friendly with the members of her crew, regularly joining them in recreational activities. In 09 NE, the Mou'Llhei Star was assigned to the Ithirebor Defence Fleet, which protected Ithirebor against the Neraida Gigamatrix during the first battle of the Neraida War. Though heavily damaged in the fight, the Mou'Llhei Star was the sole Republic vessel to escape the massacre, which claimed the lives of over three billion civilians on the planet's surface. Escaping to Lloannen Deep Space Station, Commander Celeneos saw the wellbeing of her crew and told Republic Command of the destruction wrought on Ithirebor.

The Mou'Llhei Star remained at the Station for four months, during which time Celeneos was promoted to the rank of Captain. When repairs were complete on the Mou'Llhei Star, she was assigned to the Pax Infinitus Armada assembling over the ruined ecumenopolis of Coruanthor for a final push into Neraida space. When the fleet had assembled, the Mou'Llhei Star travelled to the Concordian Nebula, where it and the rest of the fleet entered the Neraida wormhole to the Viridescent Nebula. There, Captain Celeneos commanded the Star during a skirmish with a Neraida Cube and later participated in the destruction of the Gigamatrix during the Battle of the Hub.

After the Mou'Cyran Cataclysm and the outbreak of the Second Great Cyrannus War, the newly promoted Fleet Captain Celeneos was assigned to Fleet Admiral Cretacea's Grand Republic Fleet, and promptly ordered to the remnants of the Mou'Cyran system to combat an Imperial invasion fleet moving north along the Republica Hyperlane. During the subsequent battle, Celeneos deftly ordered her fleet into the asteroid fields, where it hit the Imperial Star Destroyers Inexorable and Chimaera as they arrived in the system. Though the First Battle of the system ended in a Republic victory, the second was a crushing defeat, ridding the Navy of over three hundred vessels. Before the Republic retreated, the damaged Mou'Llhei Star was towed away from the battle by the Star Destroyer Sword of Peace.

Later in the conflict, in the aftermath of the Empire's almost total conquest over Coru Secundus, and their subsequent defeat at the Battle of Coruanthor, Celeneos and the crew of the Mou'Llhei Star joined the Third Fleet under Fleet Admiral Laege Shavalera, aiding in the liberation of the region. During the Third Battle of the Mou'Cyran Remnants, she led the New Republic to an easy victory over the Imperial defenders, paving the way to the construction of a memorial to those who died in the Cataclysm.

In 17 NE, Celeneos was briefly assigned to Fleet Admiral Gialu Kaedar's armada during the Battle of Achiliquin, where she played a role in the destruction of the Imperial dreadnought Dark Hand. Several weeks later, she was present at the Fall of the Twelve Worlds, and became a member of the New Republic Remnant, refusing to surrender her ship to President Zare'Anne. After the establishment of the Remnant's base on Harborage, Celeneos participated in frequent strategy meetings on the planet's surface.

Compassionate and thoughtful, Captain Celeneos always expects the very best from the three hundred officers that serve on the Mou'Llhei Star, though knows that the crew of a starship rarely respect an overly strict disciplinarian. As such, while Celeneos can turn cold in an instant, chiding behaviour she considers foolish, she can just as quickly reward an officer with a warm pat on the back should they perform admirably. Almost universally beloved by her crewmates, it is a testament to the unit cohesion of the crew of the Mou'Llhei Star that it survived to inform the wider Republic of the Destruction of Ithirebor, allowing nearby worlds to prepare for Neraida attack. As a result of her experiences during the Neraida conflict, Celeneos deeply hates the Gigamatix and longed for the day of its final destruction. 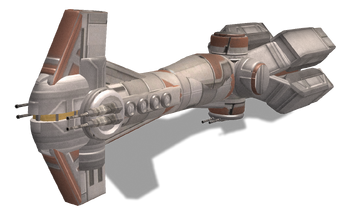 The C.R.S. Mou'Llhei Star (TOR-1202) is an Aether-class corvette commanded by Captain N'vae Celeneos. With powerful engines and weapons, the Mou'Llhei Star is a particularly powerful example of an Aether corvette, augmented for front-line combat with larger turbolaser cannons and additional weapon emplacements. Named after the peaceful colony of Mou'Llhei in Coru Secundus, the Star, as she is affectionately known, first came to prominence during the Neraida War, being the sole survivor of the Battle of Ithriebor and a subsequent participant in Fleet Admiral Willelmus Cretacea's armada during the push into Neraida space.

“A capable officer indeed, representing the next generation of the Republic Navy. To survive an attack like the one on Ithriebor... most impressive.”