What is a more intimidating weapon than the weapons of a Star Destroyer?

“I would not want to get in the way of someone that big, and as he says, he carries big guns. The biggest guns in the galaxy - that is, the Imperial Navy's ships. That Mortalitas definitely knows what he is doing, and unlike the rest of the brutes that make up his race, he keeps to the shadows and strikes you down in one swift swoop. I can tell from his grin that he enjoys it when collateral damage is particularly extensive.”

Mortalagueis was a male Mortalitas who served as one of the Grand Admirals of the Galactic Empire of Cyrannus's Imperial Navy. Elevated to the ranks of the Grand Admirals as a consequence of Zillum's defection to the Cyrannian Imperial State, he commanded over the Judicator-class Star Battlecruiser known as the Judicator, the prototype of its kind. A former member of the Confederacy of Allied Systems, Mortalagueis had pledged all of his allegiance on the Emperor and his rule, which has made him look down on Zillum and his followers for their treason.

Mortalagueis believed there was no more powerful or more intimidating weapon than the equipment of a spaceship, meaning he generally saw little need for ground-based combat unless it proved necessary for strategic reasons. As a former Confederate, he was notably displeased with the continued existence of the Confederacy of Free Planets, more than once voicing his desire to persuade them into the ranks of the Empire. He ultimately met his end during the Great Battle of Orbispira, slain by the blade of Voro Acetenus.

Little is known of Mortalagueis's past due to most of it being considered classified information. What is known is that he begun as an aspiring commander of the old Mortalitas Empire during its existence. He was among the many captains who would join the Confederacy of Allied Systems when the Mortalitas Empire pledged its allegiance to it, which led to Mortalagueis having multiple skirmishes against the United Republic of Cyrannus during the Great Cyrannus War. He was also among the forces who attacked the Friendly Republic of the Asgord during the Asgord Genocide, a mission he often remarks as being one of the most humorous and enjoyable in his career. While at first taken back by the formation of the Galactic Empire at the end of the war, Mortalagueis eventually learned to respect Emperor Tyrómairon and accept him as his leader, with him continuing to serve under the navy of the Empire despite protests from old Republic captains he had faced in the past.

The New Cyrandia Wars saw the defection of Zillum from the Galactic Empire, which caused turmoil among the Mortalitas. Mortalagueis was noted for his open disapproval of the act, which led him to be seen with favorable eyes by the superiors of the Empire who saw him as a potential replacement for the position of Mortalitas representative among the Grand Admirals. This eventually led him to be promoted to the rank at 08 NE, where he was also presented with the first Judicator-class Star Destroyer to serve as his flagship. His first orders as Grand Admiral would take place during the Cyrannian Cold War, where he was ordered to subjugate the Capricorn Remnant Alliance, a feat fulfilled with the aid of multiple other captains of the Imperial Navy which led to the Remnant's surrender and absorption into the Galactic Empire.

As the Second Great Cyrannus War was declared, Mortalagueis was tasked by the Imperial Overseer with ensuring that Indoctrinate Collective's aid to the Republic ceased before it could be used to turn the tide of the conflict, at the moment firmly in the Empire's favour, toward the embattled Republic. With a significant fleet now rallied in the Mou'Cyran system in preparation for an invasion of the Republic strongholds of Coruaan and Coruanthor, Mortalagueis instead directed his fleet to the galactic south, where due to the chaos in Republic space, it quickly captured key worlds along the Republica Run, including Conrothan, Mossahraer, Auromunda and the critical trade world of Manannán on the borders of Collective space. He would proceed to battle the Collective over their Cyrannian capital of Narsul, forcing the Dracogodasimer commander Gavakar to retreat as the planet and its nearby space were subjugated by the Empire.

Gavakar would attempt retreating to the Corathon System, only to find it already taken by the Empire, with Mortalagueis waiting for her. Emerging from behind Corathon's moon, the Imperials activated an interdiction field, preventing the Collective forces from escaping, eventually leading to their ships to be disabled. Keen to ensure the destruction of the extragalactics, Mortalagueis locked onto the Liberty with a tractor beam and joined a boarding party to capture Gavakar once and for all, though his efforts were foiled by the timely arrival of Voro Acetenus and the Unified Order of Cognalorilos, who came to the Collective's rescue. Forced to retreat, Mortalagueis vowed to have his vengeance upon both the Dracogodasimer Commandant and the Cogsangui Primarch.

During the Great Battle of Orbispira, Mortalagueis and his fleet were among the defenses which blockaded Orbispira. The dreaded Grand Admiral finally met his end when Primarch Voro Acetenus boarded the Judicator and took it over, slaying Mortalagueis in melee combat when he attempted to defend his ship's helm.

Mortalagueis appeared as a tall male of the Mortalitas race, sporting a strong physique from his many centuries serving under the military. His most noted feature were his fangs, which were considerably larger than those of most Mortalitas and normally stuck out of his mouth for being too large to hide on his jaw. Mortalagueis claimed this to be a family trait inherited from his mother, who had inherited it from her own ancestors. He was often seen wearing an imposing suit which served as armor, decorated with a cape on its back.

Highly patriotic, Mortalagueis was completely loyal to the Galactic Empire and to the Emperor, seeing it as the galaxy's only true path to achieve complete order. He was well known for his preference for space combat, seeing ground-based assaults as something to only be done when the necessity called for it rather than something that should be focused on, for on his own words, there is no greater weapon than a spaceship. Despite this, Mortalagueis did respect commanders who displayed the courage of participating in ground combat - something he did during his service at the Mortalitas Empire - and saw them in a better light than other soldiers.

Mortalagueis was known to openly mock the Republic, both old and current, calling it a dream that died stillborn and never had a chance to achieve the greatness the Empire did, much to the chagrin of former Republicans. He was also a firm believer that the Confederacy of Free Planets needed to be absorbed to the Empire at once, for it would finally mean the complete absorption of his former Confederacy into the ranks of the Emperor's servants.

The Judicator (ICS Judicator JSD-00001) was the prototype Judicator-class Star Battlecruiser constructed as a test bed for the new Star Destroyer class over three years prior to the official unveiling in 11 NE. A massive flagship armed to the brim with devastating weaponry. Constructed at a secret dyson sphere construction yard deep in the Unknown Regions, the Judicator was afforded to Mortalagueis soon after his promotion to Grand Admiral, with the first campaign of the vessel taking place against the Capricorn Remnant Alliance in 08 NE. During the battle, the Judicator emerged virtually unscathed, despite heavy rebel bombardment.

The vessel was ultimately destroyed during the Great Battle of Orbispira, when Voro Acetenus sent it on a crash course with Grand Admiral Carandial's Imperatore, exploding both vessels. 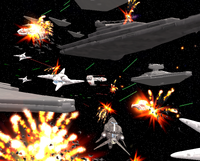 The Judicator leads the battle against the Capricorn Remnant Alliance

“You are an oddity, in a positive way.”

“I have little time to spare with nonsense.”

“Surrender to the might of the Empire, or die.”

“An efficient commander and an asset to the Imperial Navy.”