Those who defy my master will meet a most painful and humiliating demise.

Warrior of the Phaedric Order

“From the shadows, I will destroy you. When you least expect, I will tear you apart. I am the blade that will cull my master's opponents and grant him complete dominion over Cyrannus. And those who dare stand in his way will learn what true fear is when I come for them.”

Meketanor was a Cyrannian Marinox who served the Dark Lord Tyrómairon and was one of the oldest members of the Phaedric Order. Programmed into an absolutely loyal servant, he had pledged full allegiance to the Dark Lord, seeing him as a god figure who had to be respected above all else while seeing himself as the only servant worthy enough to serve him. Because of this, he showed distrust for the other members of the Order, even when they proved themselves above his power, but his attitude was ignored by his masters thanks to his great devotion and power. A warrior capable of both stealth and head-on destruction, Meketanor was a force to be feared.

Meketanor was once a high ranking trooper in the Neraida Empire, though he had significantly more independence from the other Marinox that he served with. Because of this, he had a greater degree of personality and as he matured, so did his lust for greater power. He would eventually get his wish when, in a nightmarish vision of his homeworld, the entity known as Tyrómairon was wreaking havoc, smashing Cubes to the ground in fury. Tyrómairon approached Meketanor and gave him the option of either following him as an acolyte or death.

During the third year of the Great Cyrannus War, Meketanor fought and was nearly killed by Arrtkar Crowart at the inner depths of Terminus in an attempt to protect it, and afterwards, he was tasked to eliminate Apollo, leading to his first encounter and battles with Mar-Júun. The two of them were eventually overpowered by the ancient Chaneonix, who quickly dispatched them both.

Meketanor would later be ordered to destroy all the leaders of the Confederacy of Allied Systems with the exception of Zillum and Tyrant, and instead of killing them, he relayed a message from the Dark Lord, showing he had no intention in destroying them and that they would do well into the Galactic Empire of Cyrannus.

Meketanor would venture to Cyrannian Neraida territory, and offered Khuenaten a chance to serve under Tyrómairon, where he could obtain vast powers like Meketanor had obtained, as well as infinite more benefits. The acolyte said that living under the Neraida's rule was limiting and not rewarding, that serving the Mornûnendur would be much better for him. However, it was for naught as Khuenaten rejected the effort and quickly struck at Meketanor, forcing the acolyte to retreat. The Marinox was later assigned to deal with the traitorous Agnassana, after she had ordered one of her assassins to murder Mandator Nenabie, with Meketanor achieving this by intercepting the assassin and killing him before he had the chance to harm Nenabie.

Months later, his third target would be an old rival: the Basileus demon Mar-Júun. After Mar-Júun participated in a conspiracy to kill Antedilvian and failed, he appeared to him and claimed his treason would not be tolerated. Mar-Júun scowled at the sight of the Marinox, who appeared eager to resolve the previous tie from their previous battle. The two then fought, where Meketanor unknowingly saved Nirndal from being killed. Upon defeating Mar-Júun, the acolyte exclaimed that he was banished from ever returning to the Cyrandia Cluster, and finished him off by decapitating him, his body disappearing in a black fog. Nirndal saluted Meketanor, but the Marinox looked back to him for a moment, and then walked up to him. A bright light shined out of Meketanor's eyes, which blinded Nirndal. When he regained his sight, Meketanor was gone, and he could no longer remember having seen him at all.

Meketanor would later be involved in Imperial affairs during the New Cyrandia Wars, where he worked together with fellow Phaedric acolyte Venatorius during the Battle for Nandóband, as they were ordered to awaken the Mornûnendur lord Thaurlathrón at the depths of the world. During the battle, Meketanor and Venatorius would come to face the Blade of the Primercer and eventually met Maethoruin before concluding their mission. Weeks later, the acolyte would be present during the final moments of the Cataclysm in the Neutral Zone, where he worked together with all other member of the Phaedric Order to combat the Core of Brezank. Battling side by side with the rest of the Order against the demons of the Corruptus led Meketanor to finally develop some respect for them, though he was not willing to admit it at the time.

Meketanor would later join forces with Venatorius again during the siege of Aldár, where he sought to destroy the rising order at the planet and get his revenge on Apollo, who was conveniently at the planet. While unsuccessful, the Marinox did succeed in killing Rtas'Shagili, the guardian of the Zevian Skull, by impaling him through the chest with his energy blade.

With the outbreak of the Second Great Cyrannus War, Meketanor saw himself as the only Phaedra fit to take down the looming threat of the Corruptus, who begun attacking the Galactic Empire's colonies across the First Gigaquadrant, being particularly interested in finally eliminating his old nemesis Mar-Júun, who was orchestrating the nightmarish forces' efforts. With the fall of the Empire's forces of the Borealis Galaxy during the Borealis Front, the Marinox begun skulking through the stars in search of clues of Mar-Júun's whereabouts and plans, leading him to eventually discover the Corruptus' influence over Rambo Nation and for him to warn fellow Phaedric Lord Moranonúngur of it, a chain of events which led to the Empire's subjugation of the Nation.

When Mar-Júun's servants, the so-called Glorious Crimson Imperium of Cyrandia, attacked the Outer Rim and took Vasuband, Meketanor took an Imperial fleet and assaulted the nightmarish invaders, seeking to destroy them once and for all. Confronting Mar-Júun himself in single combat, Meketanor was eventually overpowered and had nightmare essence poured into his body until he exploded into nothingness, utterly annihilating the Phaedric Lord and marking the defeat of the Empire in the planet.

Meketanor's physical appearance was a contrast to a standard Cyrannian Marinox, possessing a warped body shape and proportions, as well as a bleak, nearly gray hide, which were the results of Mornûnendur experimentation. He was programmed by Tyrómairon himself, and his physiology was believed to have been crafted by Morumadáin, who sought to improve all features of the Marinox template to fit the tastes of the Warriors of the Revelation.

In terms of personality, Meketanor was well known for his viciously aggressive disposition. As a machine, he was programmed to display a blind loyalty to Dark Lord Tyrómairon which took the form of quasi-religious worship, while being largely unconcerned with the opinions of his Phaedric companions, believing his master to "prefer him" over the others - even though Meketanor was not even considered a leader within the Phaedric Order itself during his existence. Among the Phaedra, the only member who Meketanor displayed a degree of respect for was Moranonúngur due to their position as the oldest servants of the Dark Lord - while the Bisistar Lord did not display the same feeling of self-importance, he was nonetheless amused by the Marinox's behavior. Meanwhile, he displayed visible jealously towards Agonânghâsh and Venatorius, who he saw as spoiled when compared to him and Moranonúngur.

Despite his less-than-pleasant demeanor, Meketanor was not insane; while short-tempered and constantly eager for battle, he had full control of his faculties and displayed great intelligence when necessary. He took great offense to the idea of being called insane or defective, and being compared to the likes of Emperor's Wrath or Echoriax was enough to infuriate him.

Due to his tendency to verbally abuse his companions on a regular basis, other Phaedra often lashed back at Meketanor, sometimes physically, though that often did little to stop him. The frustration caused by Meketanor's behavior was believed among the ranks of the Mornûnendur to be intentional from Tyrómairon's part; many forget he was fundamentally a machine and only acted according to his programming, and as such, he was programmed to test the resolve of the Phaedric Order's members through constant mental stress - those who were unable to cope with Meketanor's verbal abuse were considered weak, and were quickly weeded out of the Order. The Phaedra themselves - including Meketanor - were never unaware of the role the Marinox played during his existence.

“I am your instrument of fear.”

“I am my master's greatest servant. You will do well to remember that.”

“I strike you down, swiftly and painfully!”

“I trust we can work together for the greater good of Mornûnenduran rule.”

“You will use your power well, Meketanor. Crush those who dare defy us.” 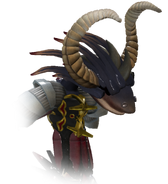 Retrieved from "https://spore.fandom.com/wiki/Captain:Meketanor?oldid=773462"
Community content is available under CC-BY-SA unless otherwise noted.