Being dead just got me mad.

The All-Mind
The First Modern Vanguard

“They thought of our master weak, so he was obliterated by the powers above. But now it seems they have given him another chance... He has become something greater than a Zanierton, something which inspires... fear. Nonetheless, our adoration remains the same.”

Mahedore Zozhro, most known as the All-Mind of Gnaaha is an incredibly ancient Zanierton scientist who serves as one of the Eight Vanguards of Shu'wokerama. Known for being the original creator of the Gynash Dragons and a disturbed mind who trapped himself in his spaceship's machinery to obtain immortality, he was eventually absorbed into the ranks of the Corruptus and now his great amount of resources are used to boost the armies of the Devourer of Dreams.

Mahedore was once considered the least powerful of the Vanguards and was at one point destroyed by Angazhar. However, after being brought back to life, his infantile mindset has been replaced with a hatred for all who opposes the lord of nightmare, all while retaining his immense intellect. His armies of cloned zealots and war monsters are more than eager to serve the will of their creator, who is in turn more than eager to use them to corrupt and destroy all who oppose the will of the Corruptus.

Most of Mahedore's ancient history is unknown, but he is believed to be over 4 billion years old of age, something he often boasts about. Presumed to have been an elite scientist of the original Zanierton Empire, he created the Gynash Dragons to be a combined war servant species and a company to himself, for he was always noted for being a loner with great difficulty interacting with other individuals. For what is assumed to be a depressive outburst, Mahedore began mass-cloning Gynash Dragons and unleashed them at the Zanierton Empire, leading to its destruction, and he linked himself to the machinery of his mothership in order to give himself biological immortality.

Mahedore would become the ruler of the Gnaaha Galaxy and periodically cause mass extinctions at the Kraw Galaxy, who would come to refer to him as the All-Mind. He would also clone a number of artificial, sterile Zanierton to serve as crewmembers of his mothership, who came to worship him as a deity much to his own indifference.

During the Recruitment, Mahedore was approached by Shu'wokerama and converted into his first modern Vanguard for the purpose of using his great number of war beasts to boost the Corruptus's ranks. His first mission would be assassinating the Tahar baby called Atiemus which would lead to failure due to the intervention of Thea'Nhirara, and afterwards, he unleashed a deadly virus at the Tahar Empire, leading to the beginning of the Tzhrhokia War. While he succeeded in causing mass scale panic in the galaxy, the virus was eventually cured and he retreated following the arrival of the Future Iteok.

Mahedore participating in the battle for the Xhodocto Bane, but due to his insolence, he was obliterated by Angazhar. He remained destroyed for about fifteen years until he mysteriously resurfaced, apparently recreated by Krathazhrukhal to serve the Corruptus once again. Due to the demons of nightmare having become a part of the Dominion of the Xhodocto, Mahedore and his creations all pledged themselves to it as response.

Mahedore appears as a greatly disfigured Zanierton with sickly green scales and blood red eyes. Since his revival, his left arm became emaciated and bony, ending with a long tendril similar to a tentacle, while his body as a whole turned taller and sharper in appearance. The machinery which once linked him to his mothership is still present on his back, alongside numbers of cables which now serve as functional prehensile limbs.

Mahedore is an immensely intelligent individual with extensive knowledge in the areas of science, especially bioengineering. However, he was always noted for being a manchild in attitude, this coming from the fact he secluded himself from interacting with other people as much as possible. Following his resurrection, Mahedore has become prone to sudden bursts of violence and has also developed a distaste for all mortals, something usually seen in Corruptus demons. The only entities he shows any amount of true care are his creations, especially his Gynash Dragons who he sees as the pinnacle of his cloning abilities.

While the Zanierton are considered inferior in physical terms, Mahedore is a very powerful entity, even more so following his resurrection. While he does not fight hand-to-hand with his opponents, he is easily strong enough to overpower his own Gynash Dragons, and he shrugs off all but the strongest Essence attacks as if they were nothing. His favorite means of combat is blasting entropic energy through the prehensile cables installed on his spine, which serve as cannons and also as grasping hands should the need arise.

“I will not fail again.”

“I have better things to do.” 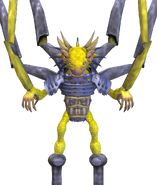 Mahedore's original body as a Corruptus Demon prior to his destruction