I just want my people to live in peace.

“A student eventually turned into a teacher herself. Macin may be a primitive in the eyes of space-faring civilizations, but she was a warrior greater than those of many galaxies. A good heart, a respectable person, a hero destined for many great things... and a daughter I loved to the very end.”

Macin Xermilin was an elderly member of the Klamb, a race of pre-spacefaring tribal creatures of the Milky Way Galaxy who had notably achieved an Ascension after studying under the angelic Thea'Nhirara. One of the destined ones of Sonhadromerith, Macin lives for over five thousand years until eventually fulfilled her so-called destiny, which was revealed to be sacrificing herself to stall the Xhodocto Angazhar in order to save the heroes of the Third Xhodocto War.

Stern, cranky and authoritarian, Macin was ultimately a good hearted individual who cared deeply for her allies and friends, willing to give up on her own life for them. A teacher of her own right, she was noted for her rigid training, which was inspired by her own time under Thea'Nhirara, who the Klamb had come to respect not just as a teacher but also as a mother. Macin's sacrifice was fundamental for the eventual success of the heroes of the Third Xhodocto War, and she is considered a heroine within the Indoctrinate Collective for it.

Macin was born 5 thousand years ago on Klambah, where she was chosen to be leader of the Klamb thanks to her tremendous leading and combat abilities. Macin was well known by the nearby tribes for her skill with spears. She led the Klamb tribe of the south for several decades before becoming senile.

As she got old, she was visited by Thea'Nhirara, who unlocked her Dream Energy potentials and took her as a student. Thea'Nhirara teach Macin the ways of Thoi Themek for over a thousand years until the elderly Klamb leader achieved enlighment and ascended into an angel-like being. During this time, she met the Dracogonarious Empire colony that existed on Klambah. While at first hostile toward the aliens, Macin eventually warmed on them, as they apparently did not mean harm to her people.

Macin was present during the Second War of Black Fog. When the Dracogonarious Empire discovered Macin's energy was the main weakness of the Corruptus, the Klamb leader was invited and recruited to join the main group of warriors dealing with the demon invasions. During this time, she met her old teacher once more and the two of them fought together against Shu'rimrodir's demons. During the Recruitment, Macin defended her planet from an attack of the Desolation Hivemind. Her efforts saved the planet from being ruined. Some time after this, Atiemus appeared in Macin's hut after he accidentaly teleported there. Atiemus was then ascended by Macin's energy, before being taken back to the Tahar Empire.

Macin Xermilin would later be present at Koluap and Windey Spinkarius's wedding, where she wanted to bless the couple like her people's traditions usually do. When Kitoruka attacked the event, Macin attempted to use her agility against him, but was beaten. After Kitoruka was gone, Macin reverted all the damage caused by him.

Macin would later be a member of the group tasked to weaken the Dominion of the Xhodocto during the Third Xhodocto War. She would join after the original team dominated a Dominion-aligned stronghold. As a member of the team, Macin mostly kept to herself, but eventually grew close to another student of Thea's, Hachiman. Macin would reveal she was the one who had the idea of sending Hachiman to fight the Devourer's Chosen during the Second Borealis Galactic War, though she claimed her idea was a success as Hachiman unlocked his potential in there.

At various point of the quest, Macin exclaimed her own "destiny" was close to coming. She spent a considerable time teaching Hachiman new abilities to use for himself. Macin would remain with the team until they were ambushed and sent to Chaos by Angazhar, where she revealed her destiny was to save the team from the "blood red god". Macin sacrificed herself and stalled Angazhar, resulting in her saving the group from Chaos at the cost of her own life, though at least some of her essence was absorbed by Hachiman. The young Tā has since heard Macin's voice inside his head, implying she still exists to an extent and now inhabits his soul.

Macin appeared as an elderly female of the Klamb species, though she was strikingly different from usual females due to undergoing Ascension through Dream Energy. She had feathered protrusions growing out of the back, which were assumed to be tiny wings, as well as light blue fur which let out a faint glow when exposed to darkness. Even though she was ascended, Macin was considered rather short for a Klamb, and due to her age, her body was also wrinkled, especially her face.

Macin was known to have little patience toward failure and tended to punish her students if they failed her, though this was a way she got to train them further. Macin's training involved bringing her students to their extremes until they realized she was doing it on purpose and confronted her about it, where she would then declare the training a success. Being an old tribal woman, Macin was prone to being cranky and did not actually have much knowledge about science. She was known to be afraid of heights, and had demonstrated an intense fear of the Desolation Hivemind following their appearance at Klambah.

Thanks to being an ascended student of Thea'Nhirara, Macin was a master of the Dream Essence. With it, she was able to release blasts of power, reshape reality to small extents to fill her needs and do feats such as empowering her allies of move at hyperluminal speeds, the latter being her favorite mean of combat. She also had access to a Radiant State which further increased her powers to even greater amounts, making her powerful enough to fight greater demons head-on with little difficulty.

“Our time together was too short, miss, as there was a lot more stuff I wanted to learn from you. ... Thank you. Even if your training was cut short, I'll make sure that it'll all go to good use, for your sake.”

“Do not take my anger for arrogance. Anger is the most powerful weapon that I can possess.”

“We had good times together. Rest in peace, old friend.”

“Sure she was an old hag but I got a huge deal of respect for someone who'd stand against a Xhodocto like she did. She died an old, heroic hag.” 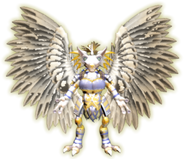