Rendered as a disembodied conscience

Lord of The Congregation

“My people felt the destruction of Tigris in more ways than most. One might think of it as if some, singular part of your mind loses connection with the rest of it. Yet even they, with their 'wide-reaching sight' refuse or are simply too blind to see the truth behind it all... Everyone speaks of Zhuleshxi as a tyrant, a destroyer of worlds. But even tyrants can be pawns.”

Zhuleshxi, known to others as the Lord of the Congregation was the last Harbinger of the Zhulultu Order, and was the Lord of The Congregation during its entire duration. An exceptionally powerful Ultraterrestrial, Zhulesxhi was directly responsible for the genocidal purging of the Tuuros Galaxy over twenty thousand years ago, plunging the galaxy into a millennia-long war. Behind the war against The Congregation since their invasions and occupation of the Andromeda Galaxy and the rest of the First Gigaquadrant for the vast duration of written history, Zhulesxhi orchestrated the War of Ages and was both directly and indirectly responsible for the death of trillions upon trillions of lives in the Gigaquadrant.

The first servant of the Xhodocto known as Angazhar, Zhuleshxi mercilessly served the Xhodocto, and even in the days of the Zhulultu Order, had began a regime across the First Gigaquadrant that caused the unnatural evolution of the known universe across multiple galaxies, as well as the deaths of countless other galaxies that were erased out of history. In modern times, Zhuleshxi is regarded as one of the most feared individuals in Gigaquadrantic history, with his legacy, the Dominion of the Xhodocto, continuing the extremist religion of the Xhodocto.

From evidence compiled in the mid 2820s, Zhuleshxi was the only surviving non-constructed Zhulultu who existed during the days of the Zhulultu Order across the First Gigaquadrant. Born into power in the nascent space surrounding what would become the homeworld of the Zhulultu, Incunabula, it is known now that Zhuleshxi's accession as the Harbinger of the Zhulultu Order was the result of the near-extermination of the Zhulultu race. In the earliest epochs of the universe, Zhuleshxi was said to have conquered all four known Zhulultu domains for his own, and cast down the three other Harbingers and countless other Zhulultu that stood against him. Those that died were reprocessed and rebuilt as new Zhulultu who served him and him alone; a practice that Zhuleshxi continued as the Zhulultu expanded. Under Zhuleshxi's reign, the Zhulultu Order spread over the Tuuros Galaxy and soon countless other galaxies that neighboured it. Zhuleshxi may have directly shaped the Tuuros Galaxy as it was, having existed in a time before the first stars formed.

In the ancient and long-forgotten years of the First Gigaquadrant, Zhuleshxi was a tyrannical and homicidal warlord who secretly served Angazhar, who the Zhulultu deemed as a divine entity of war beyond comprehension and with a malice beyond reason. Zhuleshxi's devotion to Angazhar manifested in the conquering of innumerable galaxies; destroying sentient life in numbers unknown and unprecedented, and then reconstructing these galaxies as vessel states of his order. As an affront to all things natural within the First Gigaquadrant, Zhuleshxi often provoked the ire of precursors and unremembered Ultraterrestrials who all suffered the same fate as they fell to the Zhulultu. Zhuleshxi and the Zhulultu took on many forms both horrific and fair, exerting a genocidal and absolute reign over their own space.

The Essentials, primarily the Vyro'Narza remained as one of Zhuleshxi's greater foes, who were perhaps instrumental in the downfall of the Zhulultu Order. Zhuleshxi had foresaw the end of his Order long before the other Zhulultu did; instead of warning them of this chaotic dissolution, Zhuleshxi instead went into slumber, and those that survived the cataclysmic end of the Zhulultu had done the same. Even Zhuleshxi was uncertain as to what caused the end of the Zhulultu; although nearing the end of his life, he suspected Santorakh may have had a hand in it. Before his hibernation, Zhuleshxi sent out several monolithic beacons across the stars towards planets viable for sentient life - one of which landed on Earth, the home of humanity. Zhuleshxi did not know at what time he would be reawakened, if ever - although he had planned his vengeance long in advance.

At the end of the eighteenth millennium BC, a tribe of humans in the space of ancient Mesopotamia encountered the Zhulultu monolith that Zhuleshxi had sent out over a billion years prior. The resulting activation of the monolith had either killed or mutated these humans - although it had ultimately awakened Zhuleshxi from his slumber. Awakening over a billion years later, Zhuleshxi found that his entire empire had crumbled into a vague myth; only traces of his culture were found across the stars, and Tuuros was allowed to grow naturally. He had immediately calculated his return to power - looking across the Schism, Zhuleshxi recruited several races to his power. This communion of races loyal to Zhuleshxi became The Congregation; Zhuleshxi was re-established as a god who oversaw the fiery and brutal crusades across the First Gigaquadrant.

Zhuleshxi exemplified the most commonly taken form of the Zhulultu; standing close to five metres in height, Zhulesxhi was a monolithic, black figure who exuded a darkness and a malicious aura that drove many of his opponents and adherents to fear him without hesitation. Extremely ancient by the universe's standards, Zhuleshxi wore ornate and somewhat clerical armour that indicated his nature as a living god. Twisted by the malicious energies of Angazhar, Zhuleshxi's skin was cracked and burnt beyond its already natural black, and his eyes shone a visceral red that was coinciding with the Zhulultu colour scheme of black and red. Despite the ancient nature that Zhuleshxi exhibited, his armour was inexplicably advanced looking also.

Zhuleshxi was the first of a number of tyrannical and horrific entities that plagued the First Gigaquadrant years after his awakening. Uncompromising and utterly nihilistic in his motives, Zhuleshxi had no qualms of sacrificing entire systems and sectors worth of lives to achieve his goals. Fundamentally twisted in his beliefs, Zhuleshxi believed that the universe he existed in was not the universe intended for himself nor the rest of the Zhulultu; whether his perfect universe would have been attained through the total destruction of all sentient life or by physical ascension was not abundantly clear. Zhuleshxi exhibited a severe lack of morality and reasoning, and, as the the leader of one of the First Gigaqudrant's most prominent hyperpowers, was left unchecked and unrestrained to slaughter entire civilisations.

One of the most powerful entities to have existed in the history of time, Zhuleshxi bore an array of powers that had unreservedly defined him as a god. Among the most famed instances of his powers was the destruction of Nammud Xar; Zhuleshxi was said to have razed the entire planet of its life in a fiery storm that still occasionally plagues the planet into modernity. Zhuleshxi was known to have made examples of his powers as weapons of terror - among other instances, Zhuleshxi was known to have been able to obliterate entire worlds by colliding them with other extrasolar bodies, as well as summoning hordes of Samut'angar in ancient times to scour entire regions of space. Zhuleshxi had several psychological and essence-based powers that made him highly influential over the weaker minded, which was thought to have been the process behind the inception of the Congregation.

As a servant of Angazhar, Zhuleshxi was at such a magnitude of power that it was believed that only the Essential Gods could have directly challenged him. As it was never recorded of any encounters between the Essential Gods and Zhuleshxi himself, such claims are up to speculation.

"I am an instrument of a cause far greater than what this Gigaquadrant can comprehend."

"Together, we walk through the flames and amidst oblivion to reach this world anew."

"Be it life or death; I give you both doors."

“Sincere thanks, teacher for bestowing this journey upon me.”

“The War of Ages was terrible, by all means. But if there's one moment I remember fondly was when this bastard died.”

“Though your race might have achieved a highest level of enlightenment, you in your ignorance have always remained in darkness deeper than that enveloping the lowliest of beasts. To think chaos is the highest form of universal order is as much madness as it is cowardice. Revel in destruction as much as you wish - creation shall ever triumph!”

- War Predictor Tadjamad during the War of Ages 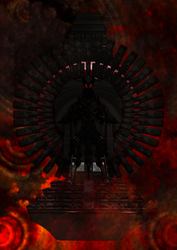