For the good of my people.

Leader of the Borealis Zazane

“I do what I must to secure the future of my race. We are no longer a group of vile savages, we have evolved to something much better.”

Kryptkor Talsar was the first and only leader of the Borealia Kingdom.

Kryptkor was born as one of the sons of Tondroskys Talsar, who acted as the leader of the Borealis Zazane inside the Wranploer Legion at the time Kryptkor was born. With two brothers and a sister, Tondroskys teached all of them to follow his footsteps, to fight for the Legion's cause and become assassins, pirates and looters like his species had been for thousands of years. While his siblings appeared more than eager to follow these steps, Kryptkor never agreed on them, having much more empathy toward the rest of Borealis than any of his family and seeing the Wranploer Legion as oppressive. This caused him to be constantly picked by his siblings and to have a rough relationship with his father.

At the age of 19, Kryptkor had been trained alongside his siblings in combat by Tondroskys, and after learning how to fight, he decided to show his rebelry toward his species' thieving nature by assuming an alter-ego known as "Sheer Cold". Under this disguise, Kryptkor travelled through the capital of the Borealis Zazane homeworld of Kryptka and began a campaign to kill all criminals and save citizens from their oppression. While at first successful in his mission and becoming a famous figure among the population of the capital, Tondroskys began becoming paranoid and ordered his military to hunt down this "Sheer Cold" and bring him to his throne room. The military began massacring innocents who were thought to have relations with Sheer Cold, causing Kryptkor to be overcome with guilt and sadness as citizens were being killed because of him. Kryptkor eventually surrendered to his father, who punished him by disowning him and imprisoning him on the Kryptka capital castle for the rest of his life.

Months later, Kryptka was hit by an attack from the Zoles Imperium, who were coordinating attacks on the Wranploer Legion's members. The attack resulted in the death of Tondroskys and all of Kryptkor's siblings went missing. With his father dead and all his siblings gone, Kryptkor was made leader of the Borealis Zazane and was forced to become one of General Volim's lieutenants. Not wanting his people harmed, he accepted the Wranploer General's leadership, but planned to one day leave him and lead his people to be free from his oppression.

During the Second Borealis Galactic War, Kryptkor was contacted by Keldar Teiran of the Brood of War, who presented him a chance to escape Volim's clutches. When the Borealis Consortium Network fell into a civil war following the death of Falrik Zaarkhun, Kryptkor and the Brood agents acted, freeing their worlds from Wranploer occupation and fleeing to the Andromeda Galaxy, leading them to join the Brood as a nation faction known as the Borealia Kingdom.

Kryptkor's life would change again during the Golden Movement. He offered himself to meet with the leader of Crispy's Insurrection, Crispy, and was the first Council member to have any interaction with him. While at first siding with Tyraz and showing disgust toward Crispy, Kryptkor was later attacked by what appeared to be assassin who injected him with a needle containing an orange liquid, knocking Kryptkor out and causing him to slowly shift his view about Tyraz. As time passed, Kryptkor eventually left Tyraz's side and joined Crispy, preparing to leave the Brood behind.

After a few weeks passed, Kryptkor declared his Andromedan kin to be independent, forming the Borealia Kingdom and aligning himself to the Golden Movement's cause. After this, he took Kalcedia Myran as a prisoner under Crispy's request, though eventually lost her due to the interference of Tagutan.

Kryptkor was eventually manipulated by Crispy into fighting Tyraz Breek, leading to the Ice King's death by his hands. Distraught and without direction, the Borealia Kingdom fell soon after, with their populating scattering away, most of them fleeing back to the Borealis Galaxy.

Kryptkor was a tall Borealis Zazane male who was often seen wearing regal clothing, including a characteristic headpiece decorated with large, purple diamonds. His wardrobe was made to act both as formal clothing and as battle armor, which made it harder for enemies to catch him off guard.

Since his childhood, Kryptkor was always a contrast to the rest of the Borealis Zazane race and also his family. Seeing a culture centered on crime as wrong and choosing to follow the path of order over chaos, Kryptkor had a very rough relationship with his father and siblings, though his mother was for the most part neutral about it. Kryptkor had grown to become an altruist man regarding his people, always fighting to give them a better future that did not involve chaos, piracy or oppression. His intentions were good-natured, though Kryptkor was shown to be gullible and was easy to fall into traps.

Due to intense training during his youth, Kryptkor was physically stronger than the average Borealis Zazane and could easily defend himself against other Zazane enemies. Thanks to his species' biology, Kryptkor could withstand extremely cold temperatures unharmed, and by contrast cannot stand intense heat. Since his affiliation with Crispy, Kryptkor studied the powers of the Descension Energy under Crispy, which eventually granted Kryptkor the power to assume a Demon Form; a building-size monster whose powers appeared to be centered around the cold. Demon Kryptkor could freeze his enemies with blasts of freezing Essence, and his physical strength was greatly increased, at the cost of temporarily losing control over his actions.

“OI WHO YOO FINK YOO IS ACTIN ALL "I IS DA ICE KING FEER ME" WHEN IM DA REEL KING HEER? I SWER MAN IMMA BEET YAS UP SO MUCH YA DADS DADS DAD WILL FEEL IT”

“You are a valiant leader, I am honoured to have you at my side.”

“You know...we still accept those who surrender.” 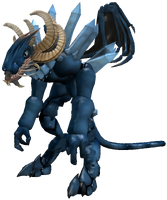