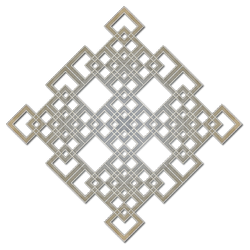 “Some find it rather confusing when they hear of an aspect of Chaos being referred to as the God of Order. But just as Chaos is hardly chaotic, Krathazhrukhal is anything but a god of stasis. He is the embodiment of perfection, the architect of an unfathomable cosmic design. All structure ultimately stems from him; within his sphere lies the organized and predictable. Outside his influence there is only destruction, unpredictability, and the unfathomable nothingness.”

Alongside Draguros, Krathazhrukhal is one of the more obscure Xhodocto. Unlike Angazhar and Santorakh of whose followers and influences frequently toil with the First Gigaquadrant, Krathazhrukhal's influence and interests rarely ever pass over into the mortal domain. Those that actively worship Krathazhrukhal view him as a god of order and structure; quite often as an unmovable and absolute deity of which there is no negotiation nor mercy should his laws be defied. Several of his followers are not even of the mortal dimension, which implies that Krathazhrukhal has a far greater presence in the dominions beyond that of this universe. Krathazhrukhal is the creator of the Vi'Navitum; a Chaosborn-turned-Essential race that govern the very essence of order within the First Gigaquadrant.

In the complex understandings of Chaos, Krathazhrukhal is the personification of perfection; the very state of what is, including the very flow of time and the continual existence of matter and mind itself is the spheres of which Krathazhrukhal embodies. Many of Krathazhrukhal's adherents, known as thumenists incorrectly assume that Krathazhrukhal is benevolent due to his self-depictions of being adorned in bright colours and a near-holy light (the name Alearenthumend in itself translates to Aurulent Divinity) - in reality, Krathazhrukhal is as unknowable as the rest of the Xhodocto, as far as to establish the governance of time itself with the Vyro'Narza and then to oversee the dissipation of all matter through the eyes of The Corruptus - Krathazhrukhal's sense of order is not absolute, and it is thought that to Krathazhrukhal and Krathazhrukhal alone, order is relative and can be realised through disorder also. This is reflective in the denizens of Arx who frequently take it upon themselves to bring a violent crusade upon the denizens of Insomnia as punishment for their chaotic ways.

In comparison to the other Xhodocto, Krathazhrukhal is sometimes seen as the most rational and perhaps the safest to commune with - however, Krathazhrukhal's demands and orders are often immovable and defiance of Krathazhrukhal is commonly met with instant death with a wrath that rivals that of Angazhar. Often portraying himself as greater than Santorakh but lesser than Angazhar, Krathazhrukhal takes on a greater-than-mortal form but not as to completely overwhelm the minds of those who gaze upon him. In the relations between the Xhodocto, Krathazhrukhal is the dualistic opposite of both Angazhar and Santorakh. He is ironically paired with Santorakh in both the divisive scope and the substantive scope due to their spheres of substance, which is met with great disdain by their followers as they are fundamentally opposed.

Krathazhrukhal is often defined as the physical embodiment of perfection; he and his very realm are driven into shapes and forms that are dimensionally without flaw, so much so that understanding such degrees of order has been known to unravel the minds of those who dwell upon it for too long. Even Krathazhrukhal's eye manifestation - considered as the greatest understandable forms of the Xhodocto themselves is a depiction of infinitely perfect-yet-complex patterns that are known to mesmerize those who look upon it. Krathazhrukhal's signature colour is gold, and is most commonly paired with black. These colours are also the signature colours of the Dominion of the Xhodocto.

To those that have communed with Krathazhrukhal, it is often said that Krathazhrukhal is difficult to fully understand despite the relative simplicity he speaks with. Even as the polar opposite of the infinitely complex and incomprehensible Santorakh, Krathazhrukhal's plans and whims are as equally unknowable and impossible. Krathazhrukhal's primary concern, or as it appears to be, is the concept of order. However, since his understanding of order is well beyond that of the understanding of even the Essentials, his whims and plans may appear as equally violent and chaotic as that of Angazhar's, and have been known in times to bring about little to no detriment to the First Gigaquadrant. As the embodiment of order and balance in the First Gigaquadrant, Krathazhrukhal's possible and only real concern is a conflict without resolution.

"Of which converges and diverges under my design; you will walk along the paths I set in motion."

"You have found yourself straggling along the seas of which demons bask in."

“From among the celestial parents, it is Hiroghain who blesses us with sight and purpose. His gift is multifaceted, and as grand as the cosmos itself. And so, as the chosen children blessed with sight, it is our duty to guide those born unfortunate towards the truth; to preach the sacred word to those who can only hear.”

- An excerpt from the Sacrosanct Word, a collection of Ezesi'i religious texts