Come at me, asshole.

“You would do best to keep away, because I don't care who you are. I want to hurt you, I want to kill you.”


Kezoreg Breek, his formal name being Kezoreg Ipevreia-Breek, is a Zazane - Asgord hybrid and is the eldest, currently only, child of Tyraz - the current Lord Councillor of the Brood of War. He is renowned by many individuals as being a hideous, destructive abomination due to his heritage, appearance and his gargantuan Descension potential which can be detected by many, even if they are not Essence adapts due to a horrifying secret kept from his knowledge - he possesses blood that has been cursed with the essence of the now-Kamik'Khazurhal Angazhar.

Kezoreg has destructive tendencies and takes pleasure in causing harm and pain to others in conflict without any restraints such as honour or tradition, something that makes him appear as disgraceful within Zazane society and a monstrous creature within most aspects of Asgord civilizations. Despite his accursed blood and his twisted heritage, he is not in full control over his Essence powers as of yet and still possesses many flaws and traits reminescent to mortals despite being born of parents who had been Descended at the time of his conception. He is currently under the advanced training of the Kicath Warlord, Kithworto.

Kezoreg was concieved between Tyraz and Diplomat Lezia through a violent, aggressive act of unwilling procreation undertaken by Tyraz upon his partner at the time before officially leaving her sometime after Kezoreg developed. Due to this, Kezoreg was left with a mother he would come to hate later on in his life once he grew up while his father attended to business-orientated matters. At some point into Kezoreg's developement, the Xhodocto that called itself Khazurhal Angazhar had inflicted a hex upon Lezia and in effect the unborn Kezoreg, who inherited a great deal of Angazhar's essences from the curse that he had struck upon her. This would come to severely affect his abilities, personality and physiology in later life.

Kezoreg's egg, upon a day where it was nearing its hatching, was forcefully stolen from Lezia during an assault on her homeworld which resulted in the many deaths of the Asgord populace, with Lezia attempting to unsuccessfully hide Kezoreg and herself from the invading race and was severely injured in the process while Kezoreg was taken from her. This event sparked a massive conflict throughout several areas of the Gigaquadrant, although he was later retrieved by his father who had punished and beat his mother for losing him during the assault on her world. His dark essences was detected at some point by a member of the Dark Five, Okastana, leading to a second assault on the Asgord world although she was fought back by Tyraz Breek who had just delivered his punishment against Lezia at the time of Okastana's arrival.

At some point during the Second War of Black Fog, Kezoreg came into contact and grew close towards the future monarch and princess of the Indoctrinate Collective, Maryah, through a visit from a reformed Tyraz to visit several friends he had made during the conflict, most noticeable Koluap who contributed his genetic material towards Maryah's hybridization and creation. Maryah and Kezoreg would grow fond of one another and Maryah would be Kezoreg's first true friend before his teenage years.

As Kezoreg grew, he had become more closely associated with his father rather than his mother, with the former taking full custody from the latter due to her incompetence in discipline and parenting, with most of her methods and techniques failing to apply to Kezoreg due to his naturally-destructive nature and character at the time of his adolescence. Kezoreg was not taught any particular style of Zazane martial art for he was refused official education in Zazane schools and his father had no previous experience with passing any tests concerning fighting or combat, thus Kezoreg had developed his own basic and improvised style of combat which is assisted through his instincts and his love for carnage and chaos, seeking to cause as much damage as possible rather than take out foes quickly and effectively.

Kezoreg, suffering from a lack of companions, was to be introduced to one of his most iconic friends; Septis Ultanos, with whom he would grow close to and help to assist to grow in confidence while Septis would assist Kezoreg in learning manners and calming down, with great failure although they still remained as friends regardless. One noticeable event revolving around the two included causing mischief in the Imperial Palace of the Draconid Imperium and infiltrating the office of Uriel Ultanos, Septis' father and the current Paragon of the Imperium. During Tyraz's visit to the territory of the Galactic Empire of Cyrannus, Kezoreg would meet Tyrómairon for the first time in his life and would be imprinted with Tyrómairon's mark in order for the Emperor to keep an Essence-based watch over the young abomination.

Kezoreg would later contribute in defeating King Mirras III during the Second Borealis Galactic War through using his improvised Essence-physical based style of fighting in order to combat the Grox ruler. During this conflict, he would meet Kithworto for the first time in his life. Kezoreg and Kithworto would meet again once more during the wedding between Tyraz and the Clericarch of the Divinarium, Template:CaptainIovera IX, where Kezoreg would also grow to become more attached to Maryah and come into a scuffle with Septis over several comments that were made at the time, although a full fight was stopped by Kithworto's assistance.

At some point, Kezoreg fell under the care of Kithworto, possibly doing so by his own actions independentely without the knowledge nor permission of his father. During this time, Kezoreg was taught to abandon his own self-improvised style of fighting and lean towards Kicathian fighting styles under Kithworto's own teachings for a brief period of time in order to secure his survival in future conflicts. These Kicathian martial arts have applied well to Kezoreg's destructive tendencies and means he can release much more potential during a fight. Kezoreg was present when the team that would undertake the mission to prevent the complete invasion of the Andromeda Galaxy from the Dominion of the Xhodocto - Koluap, Hachiman, Arkarixus, Apollo, Sarec, Macin Xermilin and Lemmo was briefed by Kithworto and the Agents on their objective.

Kezoreg's appearance is considered somewhat grotesque, disgusting and intimidating. At first glance, he appears to inherit traits from both races that are a major part of his heritage that fit together somewhat naturally and without much flaw to their appearance or placement. He inherits a respectable amount of features that are both shared and exclusive between his parent races, such as the iconic head crest, overall structure and wings of a Zazane while gaining the the spiked tip of an Asgord, although this is as far as his Asgord genetics go in terms of appearance. Due to possessing a blood cursed by a Xhodocto, he has also inherited several Xhodocto-like traits such as protrusions upon his shoulders and chest and a general blackening in his colouration. Because of his abominable appearance he is recognized easily without much effort in his current state and is generally greeted with disdain and disgust from others for it.

Kezoreg is overly confident, cruel-minded, sadistic and has incredibly destructive tendencies within his personality that constantly conflict with the state of sanity, which others have to keep intact for him in fear of him losing himself. He has a natural affinity towards ending life and has been recorded to kill insects or vermin just for the sake of it, stating that they were mere animals and were not aware of themselves in the first place. Kezoreg can be crude but when he is not initiating in spite he tends to isolate himself for others, showing hate or anger towards those that do not leave him alone and constantly pester or annoy him thus provoking his more rabid habits. He does not enjoy crowds but he does engage in acts that give him "thrills" - usually extremely dangerous and for the most part deadly.

Kezoreg does have a few exceptions regarding his usually semi-hostile nature, such as his first two friends that make up his 'circle' - Septis Ultanos and Maryah, the latter of which he has shown to be affectionate or kind towards for reasons probably beyond his own reasoning, which makes him often a target of accusation regarding their relationship being more than just friendship. Kezoreg also shows respects or fear towards entities that he sees as visibly stronger and more powerful than himself, although this does not extend towards all beings. He possesses great hate for his biological parents and despises them for attempting to bring him up, much preferring the guidance and company of Kithworto who has taken on the role of an "uncle" and some form of teacher.

“Touch them at your own risk.”

“I guess they're useful, somehow.”

“Keep away from me before you start missing your tongue.”

“You're either very brave or very stupid.”

“The only possible way quasi-demonic hybrids can go, really.”

“He reminds me of me when I was his age. Except without all the deomony-magic stuff.” 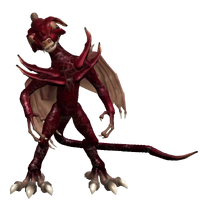 Kezoreg as a baby, by Cyrannian. Made as a gift to his friends, Lucario of the Gods and Irskaad.

Kezoreg's Demon Form
Add a photo to this gallery

Retrieved from "https://spore.fandom.com/wiki/Captain:Kezoreg?oldid=769322"
Community content is available under CC-BY-SA unless otherwise noted.