Keldar Teiran (HZC: Keledar Qavaian Teirannis), otherwise known as the High Emissary and the Mother of Soldiers, is a Zazane politician and the High Emissary of the Brood of War, alongside having been the former Grand Minister of the Affinity of Blades prior to its partial assimilation. Keldar is known for her tactical and strategic capacity in terrestrial combat and is also noted for her considerate and endearing approach towards those she is familiar with, attaining a reputation for her supposed, almost maternal, kindness for others and has maintained a career as a representative and diplomat due to her association with communication and understanding. Having served as a combatant in the Ottzello, Plazith Rim, Andromeda, and Borealis galaxies in various separate campaigns, Keldar sports considerable military history and while she retains a compassionate mindset, she is a fierce and beyond-capable soldier in her own right and is celebrated as a living example of recorded military prowess.

A benevolent and determined individual, Keldar is driven by the memory of the casualty of her family sometime prior to the Great Migration, which partially amounted towards her defection from the Third Sovereign Domain, alongside those of many of the soldiers she has commanded and as a result sustains various emotional issues behind a hardened and bloodied exterior. Leading a life largely chaste of personal luxuries, including intimate and romantic relationships, Keldar is nonetheless empathetic and understanding of others, including her various enemies such as the post-Assimilation remnant of the Affinity of Blades, and holds her colleagues, allies, and underlings in high regards by comparison to herself due to a dangerously selfless and considerate attitude.

War of Claim and Second War of Black FogEdit

“The trials of blood and fire have forged our bond as steel.”

“Of species or faction, those who tread the field of war at my side I deem my loyal comrades irregardless.”

“There are many paths one could choose to walk.”

“I find difficulty in distinguishing between filth and character.”

“Our paths intertwine in a most sour way and it must be I to divide them once again.” 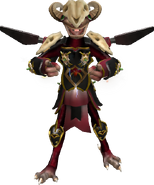 Post-revision alternate outfit
Add a photo to this gallery

Retrieved from "https://spore.fandom.com/wiki/Captain:Keldar?oldid=669782"
Community content is available under CC-BY-SA unless otherwise noted.