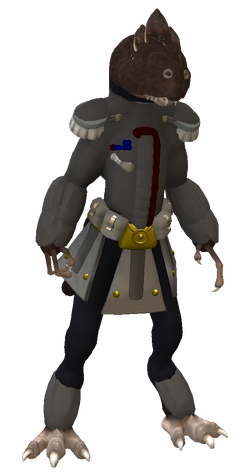 Hurst Ademan was a male Anazasi officer of the Galactic Empire of Cyrannus, holding the rank of captain of the Intimidator in the Imperial Navy.

Supremely confident in the Empire's power and superiority, Ademan was a strictly by-the-books officer who often served as an adjutant to Grand Mandator Deoclet Caesarius. In contrast to many of his people, Ademan was staunchly anti-Republic, and wished to see Apollo and his kin executed for their transgressions. Known for his overconfidence, Ademan was killed by Republic forces during the Second Battle of Coruaan in 20 NE.

A veteren of the Great Cyrannus War, Ademan eventually joined the Imperial Navy upon the formation of the Galactic Empire of Cyrannus, and had achieved the rank of captain by the time of the Second Great Cyrannus War. Placed in command of the Imperator-class Star Destroyer Intimidator, he was assigned to the prestigious Core Defence Fleet under the overall command of Grand Mandator Deoclet Caesarius, whom he served as a loyal adjutant. After the Battle of Coruanthor, Ademan joined Caesarius' invasion fleet of the Capricorn Sector, where he participated in the conquest of Apailiana.

In 20 NE, Ademan was tasked with the defence of Coruaan, though his overconfidence in his own abilities and in the power of his fleet led to his undoing, and he was ultimately killed in the Second Battle of Coruaan.

A brown-skinned Anazasi with the distinctive crest of his people, Hurst Ademan stood at the average height of a male Anazasi, carrying himself with pride as a loyal officer of the Imperial Navy. He was most often seen in a dark gray Imperial officer uniform, embroidered with crimson Imperial red, dual shoulder pads, command codes, and a medal of commendation for his role in the Battle of Vasuband in 05 NE. Though not inefficient, Ademan was somewhat unimaginative during space combat, rarely improvising or acting contrary to the dictates of Imperial Command. However, he was well liked by the crew of the Intimidator, who came to respect the captain's bluntness and brevity of speech.

Retrieved from "https://spore.fandom.com/wiki/Captain:Hurst_Ademan?oldid=850897"
Community content is available under CC-BY-SA unless otherwise noted.