“im da king of evryfin an no ones worthy of even lookin at me. but im surrounded by ma royal bodyguards dat do all of dat”

King Grak'tona, alternatively referred to as Da Propa Big Cold Boss Grak'tona or by his stage name Ice Cube, is the leader of the Cold Loron and one of the Leedas of Da Rogue Boyz. Fancying himself as a royal figure, Grak'tona is notoriously egotistical and believes he is the rightful king of the universe. Incredibly delusional, Grak'tona does not consider himself equal to the Leedas, even the higher-ranking Fre'kloar, and instead thinks of them as his royal bodyguards and advisers.

Despite his ego, Grak'tona is still highly respected by the other Cold Loron, who often consider him a strong leader despite his goofiness. In fact, Grak'tona's delusion that he is the king of everyone often gives him a sense of motivation to fight harder than any other Cold Loron, and is the main reason he has trained himself to be so strong. Grak'tona is also a hip hop recording artist under the name "Ice Cube", fancying himself also as the best rapper in Da Rogue Boyz, and has made it an unofficial law to purchase all of his albums.

Grak'tona grew up his life as the main Warboss of the Groop that occupied the Cold Loron area in the Borealis Galaxy. He was well known for his remarkable survival skills, having stolen ancient Kormacvar artifacts and giving them to Da Chikz to test on him. These tests resulted in Grak'tona being the first Cold Loron to survive in warmer environments, which added to his already revered for his persistence and survival instincts.

The first in many years, Grak'tona climbed the thrown made of ice simply known as "Da Ancient Ice Throne", making him the Cold King, and lord of all Cold Boyz. However, to gain this throne, he simply needed to pass the test of climbing a mountain, walking on a hot world, and adding 2 + 3. From this point onward, Grak'tona referred to everyone else a 'lowa pesent dumbo'.

Grak'tona, during the prior events of the Second Borealis Galactic War, joined Da Rogue Boyz. Since then, he has been in various adventures with them, from the Borealis War to the Ice Age. Grak'tona was made a Leeda, being responsible for leading the Cold Loron inside Da Rogue Boyz. Since then, he has participated in many of the Loron leaders' adventures through the galaxy, always maintaining his arrogant and king-ish attitude.

At the beginning of what was known as Da Rogue Era, Grak'tona suggested and participated in Da Ice Cube Trials. His plan was to prove his royalty, and he went about it by killing a king in the Zoles Imperium. Naturally, Grak'tona forged his assassination, and in fact had pretended to kill a Zoles king who had died years ago. Grak'tona continued to play a pivotal role in the era, including in Da Reckoning, when he led the fleet to conquer the Andromeda Galaxy. Grak'tona was ultimately unsuccessful in defeating the Pan-Andromedan Ecumene, and forced to retreat.

Grak'tona wears more spectacular, royal outfits than the other Loron bosses, which were tailor made for him due to his kingship and royalty, and are all decorated in radiant gold. He is also considerably tall, even for a Cold Loron, which makes him stand out among his subjects, though he is the shortest of the Loron Leedas in the Rogue Boyz.

Grak'tona often boasts about his kingship, referring to others 'pesents' and 'low class dumbos', and even considers his peers among the Leedas - who are his equals, and in Fre'kloar's case, his superior - as merely his "royal advisas" and "bodyguards". Whenever he speaks, even more so than other Loron, he will speak as if his authority is absolute and he has the final word (often backing his arguments up with 'who has da crown?'). However, the other Loron do not see through his ego, as he is well known to be delusional and a compulsive liar.

Grak'tona's way of life, which is considered to be "classik old wayz", made him a relatively good friend of the older leedas Jol'kiar and Brag'klogga. However, despite this, he shares a love of war and a love of partying with the other Loron, and will often join in on their fun. Despite being extremely delusional, the toughness and playful attitude of Grak'tona has earned him respect, as many of the Loron simply allow him to live with his delusions to satisfy himself.

Grak'tona is the toughest Loron with rock hard skin that can sustain damage that few other biological organisms can. Though he is physically strong as most of the Leedas, his toughness is ultimately what gives him the edge in combat, as his rock, hard skin is what provides him more strength than his muscles. Furthermore, Grak'tona's delusion of being king of everything provides him a determination to prove his strength, often giving him an edge in combat and a strong psyche. As with other Cold Loron, he has an 'ice spitta' which can freeze opponents with liquid hydrogen.

“Who is that frostbitten barbarian anyway?”

“If your opponent is temperamental, seek to irritate him. Pretend to be weak, that he may grow arrogant. If he is taking his ease, give him no rest.” 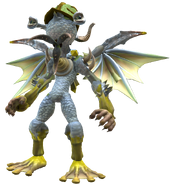