“Borealis is not like your usual galaxy, where most pirates and thugs serve no one but themselves. No, in this galaxy, they have a maximum authority they would never dare contesting. And that is the Wranploer General. Outside, a leader of an empire of brutes. But inside, a tyrant who wishes to make room for his "master race" to take over.”

Volim Thravra was a Wranploer dictator who served as the founder of the Wranploer Legion and later as one of the ultimate leaders of the Borealis Consortium Network. The most wanted criminal in the Borealis Galaxy's modernity, a mix between a space pirate and a tyrant emperor, Volim sought to dominate the entirely of his home galaxy, destroying those who opposed him and ruling over the survivors with an iron fist with his Wranploer race serving as the masters of the stars.

A stubborn believer of the superiority of the Wranploer, Volim was the arch-enemy of the Zoles Imperium and did all in his power to oppose them and their quest for utopia. Using his military might and influence in the galaxy's underground, he sought the annihilation of all who stood in his way, and to this day, many remember him as one of the gravest threats to Borealis's stability in modern history.

General Volim's earliest known reports come from the creation of the Wranploer Legion, almost 2 thousand years before the modern age, after he had reformed the former Empire of Vijaha into the Legion with the enslavement and indoctrination of other similar-minded races. General Volim planned the Legion to become the masters of Borealis via a galaxy-wide war known as the First Borealis Galactic War, where the Legion caused massive chaos while scavenging from the remains of their fallen enemies.

However, a force known as the "Polar Crystal Alliance", led by the Zoles Imperium, waged a campaign against the Wranploer Legion, defeating it and denying it from its plan of dominating the galaxy. In the attack on the Wranploer's capital, Volim was though to have been killed. However, he was later confirmed to have survived. About 890 years ago, General Volim was captured by King Mirras III and taken to Planet Mirras, where he was subjected to a bizarre experiment involving a mysterious being in his head. This event traumatized Volim, causing him to fear the Grox since then.

Durng the First Wranploer War, Volim watched as the Legion came in conflict with the United Lanat Empire after being "employed" by a mysterious individual. Seeing the ULE was much more powerful than them, Volim employed help from the Seagon, which gave them a technological advantage. However, the ULE got their own allies in the Niaka Special Forces, who knew the weakspots of the Legion and Seagons due to their experience.

Volim eventually gave up after the loss of an important shipyard planet, and confronted his "employer", Lino. Revealing to have sent spies to learn about him, Volim gave away Lino's location to the ULE in enchange of a truce between the Legion and the powerful Tralor empire.

During the Clash of the Crimelords, General Volim went to war with rival Falrik Zaarkhun. At the end of the war, however, Volim joined forces with Zaarkhun, as they decided it was much more productive to join forces than for one force to take over, as Consortium had things the Legion didn't, and the Legion had things the Consortium didn't. The result was the Borealis Consortium Network, which Volim was a secret member of. Volim slowly began to trust Zaarkhun more as time went on.

During the Second Borealis Galactic War, Volim did what he could to protect himself against the growing Xi'Arazulha threat. He fought in several battles against the madmen of the Devourer's Chosen as well, and during these battles, his trust for Falrik Zaarkhun started to grow. During the final battle against the Chosen, Volim personally fought and defeated the demons and cultists of the Corruptus, aiding in defeating the enemy for good. During the Vague invasion, Volim remained neutral, resuming his usual activities. Following Ottzello's quarantine, Volim launched the Business of War campaign, which introduced the War Economy and plunged the galaxy into anarchy. It ended, however, with the Zoles and their allies winning back before Volim could start a genocide on them.

When the Wrath of Gods began, Volim obtained two of the seven Chronoscopic Shards, and then reluctantly allied with the Zoles to defeat the Seagon Empire, the Alvino Brood and the Devourer's Chosen. Notably, during the war against the Borealis Grox Empire, Volim learned that the being who had scarred his mind in the past was Regnatus, and dedicated all of his resources to destroy him. After this, the Shards were turned into the Chronoscopic Orb, which Volim stole from the Polar Crystal Alliance. Following this, Volim and the BCN made contact with a Volim from the past and the old Wranploer Legion of the First War, adding them to the BCN. Volim ordered the domination of all PCA founders, losing his young self in the process, and later used all remaining surviving natives to fight and destroy Zargoth. However, due to Kolossus surviving and going back in time himself, Volim had his homeworld attacked and his allies killed. In an act of desperation, Volim swallowed the Chronoscopic Orb, ascending into a godlike monster, but was ultimately defeated by the Polar Crystal Alliance.

As punishment for abusing the Orb, Kolossus condemned Volim to spent the rest of eternity floating across the empty void of Chaos, most specifically Insomnia, being cursed to be completely immortal and indestructable. During Tantummodo Mortem, the group tasked to invade Xhodocto territory were sent to Chaos by Santorakh, where they met with Volim. Even though little time had passed in-between the Borealis War and the Xhodocto War, Volim had already completely lost his mind and appeared to had been mutilating himself in an attempt to suicide, which obviously failed due to his invulnerability curse. He is currently still imprisoned, and will stay like this for all eternity.

Volim appeared the same as a normal Wranploer, except he wore an large, heavy military outfit to represent his authority. He also had many scars from battle, and many mechanical implants, signifying his many fights of ages. Volim's most notable implant was his right eye, lost during the First Borealis War. Volim was also considerably large, being almost twice taller than a normal Wranploer. His large size was attributed to the fact Wranploer never stop growing with age.

Volim had the mind of a cruel thief. He did not care for what happens to others, as long as he was benefited somehow. He didn't show compassion for anyone, not even for other Wranploer. Volim's general attitude was grumpy and selfish, and he had rarely ever shown respect or admiration for another individual. It was also nigh-impossible to gain Volim's trust. Volim had been identified as wanted in 356 civilizations, of which most have been destroyed.

Volim was noted for incredible strength, empowered through series of mechanical implants which allowed him to overpower Loron in melee combat. He used several weapons, and was also equipped with several cybernetic implants which gave him his special abilities as well as give him an unlimited lifespan. Volim was outfitted with specialised nanomachines, including those in the Zaarkhun System, which he had command of with Falrik Zaarkhun, which added to his unlimited lifespan, as well as improve his all-round strength. Volim's weapon of choice was an Infantry Particle Blaster and a subatomic disruptor, more powerful than those of other infantry, which caused a slow and painful death to his foes. In addition, he used laser-tipped blades with powerful venom to immobilize.

“You have my approval. You should feel honoured.”

“I haven't heard much about this individual, but from what I have heard, he is not a pleasant person.”

“Now this is finally an individual who knows what he's doing. Quite possibly my best partner in crime. Strong willed, strong leader, strong fighter, the perfect ally in any situation.”

“Do not call yourself a general. Do not even call yourself a warrior. You are worthy of neither, and your arrogant behaviour only spells worse days for the Consortium. It would be better off if I killed you and Falrik took your place; a systematic thinking leader like him is better than one whose leadership is built on ego.”

“General Volim has a respectable past; for someone born in fortune, he does have a lot of experience of tougher times. As a warrior and a leader, he has my respect.”

“Hmph. A crimelord who wants to be a dictator. He's proven to be rather irritating...”

“Ah! My favourite mortal! We have had many adventures together. Written two operas with him, using him as a musical instrument of course, as well as many tea parties! You love me really, Volim.” 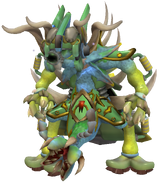 Volim ascended by the Chronoscopic Orb 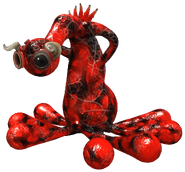 Volim's appearence after his imprisoning at Insomnia

Retrieved from "https://spore.fandom.com/wiki/Captain:General_Volim?oldid=800168"
Community content is available under CC-BY-SA unless otherwise noted.