Down with the Empire!

“I will bring honor back to the Basileus!”

High General Amros Nakatar is the highest ranking officer in the military of the Capricorn Remnant Alliance.

Under the Basileus Edit

Nakatar joined the navy of the Confederacy of Allied Systems at a fairly young age and was almost immediately promoted to captain on his Empirical-Class called, the Hyperdagger. During his three-year career, he became well known in the Confederate navy. He strongly opposed the idea of the Basileus leaving the Confederacy, and he openly voiced his opinions to the Imperator, lthough he ignored Nakatar's input and left the Confederacy anyways.

The formation of the New Basileus Empire outraged General Nakatar and his men, who began to plan treason against the res of the Basileus. He swiftly created the Basileus Freedom Movement and, during an attack on the Cognatus Remnant in the third year of the Great Cyrannus War, he personally insulted the Imperator as he openly declared his rebellion. Then, he disappeared for a number of months before joining up with a Basileus Justicar named Torva, and attending the formation of the Capricorn Remnant Alliance.

During the formation of the Galactic Empire of Cyrannus, General Nakatar led an assault on a small, Imperial task force, as he believed that joining the Empire, was opposed to Basileus ideals and rights as the 'destined rulers' of the Cyrannus galaxy.

In the sencond year of the Dark Times, he was plotting the assassination of an Imperial senator called Guolivian, however when this plan failed he was reassigned to the CRA fleet which would join the Cardines Campaign in the third year.

"For the glory of the Basileus!"

"Down with the Empire!"

“Hmph. You are a waste. A betrayal of all that is orderly in Cyrannus.”

“You want honour to the Basileus? Then succumb to the Empire's might!” 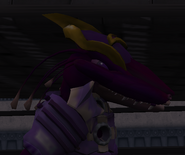 Retrieved from "https://spore.fandom.com/wiki/Captain:General_Nakatar?oldid=696321"
Community content is available under CC-BY-SA unless otherwise noted.