All life is dear to me.

The Mechanic - brother
All Alvino - children

Leader of the Alvino

“I am the caretaker of nature in Borealis. To harm nature is to harm own children, and I do not tolerate my children being hurt.”

The Alvino Brood Mother is the organism who gives birth to the Alvino race.

The Alvino Brood Mother became active during the Second Borealis Galactic War's Wrath of Gods, when she became in possession of one of the seven Chronoscopic Shards. Using this artifact, the Brood Mother recreted the formerly destroyed Hostile Xenoform Threat and assimilated it, further empowering her Alvino. However, the Alvino Brood Mother would fall after Viniaris was attacked by the empires which would later compose the Polar Crystal Alliance, being incapacitated by a spacetime defect weapon and later glassed to oblivion. After Regnatus was destroyed in the Symphony of Flesh and Steel and the Borealis Grox were reformed into the Kormacvar Legacy, the Mechanic found the Brood Mother's genetic material in Regnatus' old databanks, and started a project to bring her back to life. This project was an eventual success, with the Brood Mother being recreated back in her original form and placed back at Viniaris.

The Alvino Brood Mother appears as tree-like Alvino of humongous size. Her colouration is very distinct from that of her children, with her skin being purple with shades of red, and her eyes being shining light blue. She is rooted into the soil of Viniaris like a tree, with her roots being several hundred meters large. Flowers and fruit grow out of the Brood Mother's body on a daily basis, with her fruits having a taste comparable to that of Terran tangerines.

The Alvino Brood Mother is an incredibly gentle being. She has great passion for nature and all biological life, especially for her Alvino children. She is easy to befriend others and enjoys the company of outsiders. Being created to maintain biospheres, the Brood Mother is very curious about new kinds of species, be them animals, plants, fungi or bacteria. She studies other lifeforms from her home at Viniaris through computers supplied to her by the Mechanic.

The Alvino Brood Mother is the most powerful being in the Borealis Galaxy after Kithworto and the Mechanic. Her psychic potential dwarfs that of beings like Vorius or even the entirely of the Rovegar race. She can constantly breed new Alvino drones on a daily basis and requires nothing to do so, except feeding through photosynthesis. Her gigantic size makes her extremely strong and attacks from anything but the most advanced weapons or Essence do little against her trunk-like hide. In contrast, the the Alvino Brood Mother is completely incapable of moving out of the spot she is rooted at. However, being a gentle being, the Brood Mother has no use for her powers but to communicate with her allies from long distances. Like the Kormacvar, she can also read through the minds and nervous systems of other beings through touch, allowing her to learn new languages in seconds.

“I remember the Brood Mother of 5 billion years ago. It's good to see she has returned.”

“I dunno what it is, but there's something... motherly about her, like Teacher. Hehe, I love climbing and swinging from her branches and vines.”

“Ancient goddesses still exist within the day of mortals and modern civilization, it appears. Such deities are difficult to come by.” 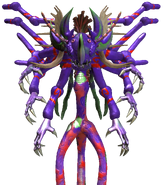 The Alvino Brood Mother under the control of Regnatus