~5,840 years
“We are all orphans to society. Each of us but a droplet of rain; alone to fall onto others as if nothing but an inconvenience, but together we crash upon them with the ferocity of a storm!”

The Orphan Fleet is a powerful piratical faction operating within the Tuuros Galaxy. The brainchild of Eosi'i the Orphan - the seemingly immortal Ezesi'i pirate lord - the fleet has been a destabilizing force in the galactic community for several millennia. In addition to being one of the galaxy's oldest pirate factions that have survived to the modern times, the Orphan Fleet was also one of the founders of the Tuurosian Covens - namely the Marecosi Coven.

While the Orphan Fleet was first founded thousands of years ago and with it having persisted to this day, it has notably been rendered defunct numerous times throughout its long existence. These events have often been linked to the countless reported deaths and reappearances of Eosi'i. Over the course of the years, it has not been uncommon for the Orphan Fleet to shift its policies in accordance to the will of Eosi'i - which has had a tendency of changing with each of his incarnations.

Earliest traces of the Orphan Fleet's activities date back to time around the founding of the Sacrosanctity of Hiroghain and Ikara, with Eosi'i himself likely having left his homeworld among the very first Ezesi'i explorers. For the next few decades, a following of dissidents and other outlaws formed around Eosi'i who led them on the path to form the very first iteration of the Orphan Fleet. It was during this time that the Fleet went on to construct the power base through which its cyclical nature has been able to function nearly flawlessly through the years. Continuing to grow exponentially in power and influence, it was only a matter of time that the empires of Tuuros grew anxious enough to deal with the pirates. In the ensuing conflict it has been unanimously acknowledged that Eosi'i was killed during an assault against his flagship of Orphan's Tear - rendering the pirates who had followed him virtually leaderless and lacking any semblance of unity. As a result, the Orphan Fleet became fragmented as its remnants went on to form countless independent pirate gangs throughout the Tuuros Galaxy. It was only after the initial return of Eosi'i many years later that the Orphan Fleet returned to activity as its own entity.

However, the newly reformed Orphan Fleet was but a shadow of its former self due to efforts to find new recruits having become increasingly more difficult as the first Fleet's remnants - or Inheritors, as Eosi'i came to refer to them - had become powerful on their own, and therefore were compelling for many pirates. Eosi'i viewed this competition as a positive thing as more rival pirate factions would serve to cause more conflict within the galaxy, weeding out the weak and leaving the strong to stand above their lesser. Having lost much of its influence over its long phase of inactivity, the Orphan Fleet genuinely rose to prominence once again thousands of years later by recruiting large numbers of Kamagorian refugees soon after their homeworld was conquered by the Asilaphean Empire, and later on with Eosi'i taking part - alongside the pirate lords Axshuai and Tuk Nijusi - in the founding of the Marecosi Coven.

Centuries later however, the Orphan Fleet went on to suffer another defeat in a massive pirate raid organized by Eosi'i against the Nanusuloan Convocation; brought about by the latter's losses previously sustained in its battles against The Congregation. While the pirates were able to strike at numerous frontier worlds and outposts, the Nanusuloan Convocation was still able to launch an effective counter-offensive against the raiders. In the aftermath, Eosi'i was once more pronounced dead and the Orphan Fleet was left in shambles; effects of which can still be seen to this day. Upon his eventual return, Eosi'i expressed to his downtrodden followers that while it hadn't been his exact goal, this loss had been necessary as he had come to consider his men too enamored with the relatively easy life made possible by the Tuurosian Covens - while still considering them to be a necessity for survival. Later on, the Orphan Fleet managed to create a foothold within Imi-Khattok Sector as the leadership of Sacrosanctity of Hiroghain and Ikara became more lenient towards the pirates due to Eosi'i playing an important part in ending their civil war.

Often seen as nothing but a roaming band of raiders with no structure or discipline who are only held together by Eosi'i, the Orphan Fleet can seem to an outsider to be in a continuously fragile state. In reality however, the pirates operate under a strict set of rules and regulations; drawing both from the Marecosi Coven's code and the personal beliefs of Eosi'i. Each captain of a ship is referred to as a Voidwalker, and has total control over his vessel and crew while still having to directly answer to Eosi'i. In regards to contact with other members of the Marecosi Coven, Voidwalkers are to serve as the voice of their captain and are ultimately held responsible for any misdemeanor caused by his crew or himself towards the other party. In addition, Eosi'i keeps a personal eye on each of his subordinate captains and is known to exercise capital punishment on those who disobey or disgrace him in the form of a total mind wipe, reducing the victims to mindless husks who are often jettisoned alongside a ship's waste.

While the Orphan's Tear often acts as the command center for the entire fleet, the actual headquarters of the Orphan Fleet is the deep space station of Wanderer's Ring. This ancient ringworld-esque station built by an unknown precursor race was discovered and commandeered during the initial Orphan Fleet's tenure. Notoriously impossible to locate through contemporary means, the location of the Ring is only known to the higher-ups within the Tuurosian Covens - and even then only on a need-to-know basis. Additionally, the station is guarded by a portion of the Orphan Fleet alongside the station's own defense systems, rendering most assaults against it likely to result in a defeat. In the event that Eosi'i would die, he has ordered the Fleet to regroup at the station until such time that he returns to them. Over the course of the years, there have been some who have gone on to impersonate a returned Eosi'i in his absence - often met with little success once the actual Eosi'i returns to lead his men. 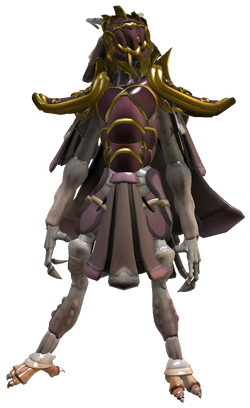 “The echo of silence is music to my ears.”

The second-in-command of the Orphan Fleet, Bariu Than is a pirate whose career in piracy is among the most well documented. Beginning his journey in the galaxy as an escaped slave from the Sacrosanctity of Hiroghain and Ikara, Tahn went on to become an accomplished pirate hunter and earned the reputation of being the worst nightmare of Tuuros' pirates. Much of his success stemmed from his capacity to understand the intricacies of a pirate's mind, and how to use that knowledge to his advantage. However, while working with the Asilapheans, Tahn was betrayed by his allies - viewing him as nothing but an opportunistic mercenary - and was left for dead. In a surprising turn of events, he and his surviving crew were rescued by Eosi'i from the wreckage of the pirate hunter's ship. This near-death experience brought about a drastic change within Tahn; pledging himself to Eosi'i and vowing to bring the Asilapheans to ruin.

Ruthless and uncompromising to a fault, Tahn is a terrifying man to face in person and is capable of excessive violence against anyone who undermines him. Fiercely loyal to Eosi'i due to him saving his life, Tahn considers his word absolute and doesn't show respect to any other pirate lord - who often return the favor; given his history as one of their greatest enemies.

“Attractiveness and unsuspecting nature aren't, or rather shouldn't be, the only weapons in a woman's arsenal. She should be able to convince others that she is needed, that they require her.”

Of all the pirate captains within the Orphan Fleet, Cinis Morgial is considered to have had the most rapid rise to power. Born in the Nijusi Syndicate near the end of last century, Cinis entered the pirates' world as a young woman; joining the crew of the Laughing Star, a cruiser which was at the time still under different leadership. Through subtle manipulations, Cinis was able to take control over the ship once the elderly Sumikian captain died. As the ship had previously been part of the Orphan Fleet, Cinis took over her predecessor's role as a Voidwalker and soon came into direct contact with Eosi'i. Acknowledging her skills, Eosi'i gave Cinis the position as the administrator of Wanderer's Ring, the Fleet's base of operations.

While a woman with a keen tactical mind, Cinis finds little enjoyment in the more obvious piratical behaviour; instead preferring to focus her mind in the logistics of the entire Orphan Fleet. Manipulative and opportunistic as they come, she is also not above using her feminine looks to get what she wants. Despite her ambitious nature, Cinis greatly admires Eosi'i and his deeds - with the two of them being known to exchange joking gestures at one another.

“These pirates are an ever-growing, festering wound on our people's honor. We have lost countless generations of bright children with hopes and dreams to the vile lies of the Voidwalkers. To even insinuate that we would be contributors to their 'cause', is to spit on the face of thousands of years of enlightened thought.”

“In time, the Wanderer's Ring will be found, and the Orphan Fleet along with their god-forsaken captain shall be razed to oblivion. They toyed with us, and they will pay the ultimate price for it.”