Leader of the Katel

Count Dalverat, codename The Skull, was the leader of the Katel and a former member of the Unified Nation of Ottzello's deadly unit UNOC. Vampiric, lightning fast, deadly and potent with Dark Chronoscopic, Dalverat was a force to be reckoned with.

Dalverat's past of mostly unknown, as those who remembered about it are all dead. Dalverat had always been a notable Katel, being stronger and more powerful than the others. He would eventually become their leader and lead them in their battles against the Ioketa. Dalverat tried, and failed several times in killing Tuolog, who eventually defeated him in battle.

When the Ioketa sealed Dark Powers away in a single mask, known as the Dark Mask, Dalverat spent his life trying to find and unleash the power of this mask. It took him many years to search for this mask, but it was only found when the Hostile Xenoform Threat uncovered and unleashed the mask.

After the Katel were absorbed into UNO, Dalverat was given The System, which turned him into a powerful member of the Unified Nation. He was killed by a Xi'Arazulha during the Second Borealis Galactic War, but was later revived. However, at 2802, Dalverat was killed once again by Voa'reak during Da Ice Cube Trials by being squeezed and crushed into his grasp, with his death being this time permanent.

Dalverat was considered posh and antisocial, believing himself to be above most other species in UNO. He preferred to stay in the shadows, alone, and would also rather kill someone instead of trying to negotiate.

Dalverat had no equipment, as he had no need for it.

“Hmm, you come somewhere close to my level.”

“Your blood is MINE.”

“YA MOM...Excellent thought pattern, Dalverat. We shall proceed with this plan immediately and I shall carry out these actions...BUT YA MOMS STILL DUM”

“While you are now my ally, you are still misguided. I wish you could put the past behind you.”

“Brother...why must you be so cynical to others? We're all allies!”

“Yeah, baby! Once we got you on our side we know we're winnin' something.”

“His mind is an incredibly useful asset in controlling and leading the Unit.”

“My leader...I am at your service, Count. Together we will be a formidable force.” 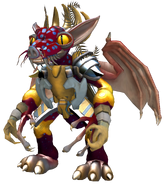