I will hunt Zargoth down until he's nothing but dust!

Evaporating blaster(as a Vague)
Advanced trooper weapons (as an Ottzel)

Leader of The Vague

Dakster is the name of the leader of the Vague, and formerly the most successful Ottzel captain for the Grand Ottzel Order and the Unified Nation of Ottzello, serving as an UNOL member. In life as an Ottzel, Dakster was a very rich and successful explorer, as well as a leader of the Grand Ottzel Order's military forces, being the most famous and talented pilot among them. Dakster's success led him to be declared the de facto leader of the Ottzel when the United Nations of Ottzello was formed, a position he retained in the Unified Nation of Ottzelllo.

After Kolossus destroyed every Ottzel alive, Dakster was killed and became a Vague. Crowned as their leader, Dakster changed drastically. From a well-loved pilot to an irrational vigilante who fought to protect everyone he once held dear, there is almost none of the original Dakster left in the Dakster who is now the Vague leader.

Dakster was born the son of two explorers, who were treasure hunters in the Ottzello Galaxy and sold their treasures for great fortunes. They were both freelance explorers, whose treasures included famous Vyro'Narza artifacts. Early in Dakster's life, they were hunted and killed by bounty hunters hired by a large Ottzel corporation to fend off the competition.

Dakster then lived with his uncle and aunt, training to be a skilled pilot and an explorer himself to follow in his parent's footsteps. Once he was able to, Dakster killed the leading executives of the corporation responsible for the death of his parents, as well as the bounty hunters responsible, and then carried on his family's work, finishing much of what they started, discovered worlds for colonise, and obtained artifacts scattered throughout the galaxy. His work earned him the attention of the Grand Ottzel Order, who made him a high ranking council member.

Despite his role in the Grand Ottzel Order, Dakster rejected all notions that the Ottzel were a superior species, and like his parents, refused to own slaves. This put him at odds with the rest of the Order, but made him more popular in the broader galaxy.

During the First Ottzello Galactic War, Dakster truly fought more for his species against Da Propa Big Loron Empire. He made use of his pilot training and combat experience when fighting against them, wishing to work for the Order to protect his people. He fought freelance, working for no private military company, and earned an even greater reputation amongst his kind.

Dakster begun his own non-profit private military company that would fight in the interests of the galaxy, separate from the Order. This group would aid in the Delphan Excavation of Ottzello, where Dakster became a latecomer to the war to fight alongside the Delpha Coalition of Planets and seek out more Vyro'Narza artifacts.

Dakster was crucial to negotiations with the Galot Republic that formed the United Nations of Ottzello, and became the de facto leader of the Ottzel when the Grand Ottzel Order mostly disbanded. His non-profit military company formed one of the many groups that made up the United Nations' military forces against the Loron. He was later forced to evacuate Ottzelloans to hide on the outskirts of the galaxy, believing the war against the Kralgon Invasion Force was lost. Finally, Dakster would lead the Ottzel in the United Nations once again against the Hostile Xenoform Threat, fighting alongside lost allies in the Ottzelloan Grox, during the Third Ottzello Galactic War.

Dakster would then serve as a leader in the new Unified Nation of Ottzello, and followed them to the Ottzello Sector.

Dakster was killed in the Clash of the Crimelords, along with the entire Ottzel species. He sacrificed himself to prevent Kolossus from causing catastrophic damage, by absorbing Kolossus' power that he was charging. This, as a result, destroyed Dakster and anyone with closely matching DNA, thus killing the Ottzel. Any records of Ottzel genes were destroyed, meaning they could never be cloned again. At the time, it was believed to be an unintended consequence of Kolossus' rage.

Return as a Vague[]

A few years later, Dakster returned, now as a metalic monster known as a "Vague", after the Xi'Arazulha were defeated in the Second Borealis Galactic War. He was leading the Vague into a crusade against the Unified Nation, for unknown reasons he claimed to be "for their own security". No one in the Unified Nation, or the rest of the universe, believed any of Dakster's claims, and could not justify his murder of innocents.

It was later revealed that the motivation behind Dakster's crusade was to prevent Zargoth from turning UNO into Vyro'Ralza. Because Dakster was tortured if he attempted to explain, he and the Vague were forced to destroy UNO instead, to save them from a worse fate. To Dakster's relief, UNO denied Zargoth's offer of becoming demons, but this only fuelled the war to last long as the Vyro'Ralza would now try to destroy the galaxy. Dakster saved the Unified Nation and their allies, and now they were no longer enslaved by the Vyro'Ralza, vowed to destroy them.

Dakster mostly fought off the various time anomalies that ravaged the galaxy created by Zargoth's servants, Kolossus and Antagonar. He later helped destroy the Devourer's Chosen, when it was clear they had become too powerful for the Unified Nation to cope with them. Finally, Dakster destroyed Sollow by evaporating his nanomachines with a blaster organ, and helped the Polar Crystal Alliance defeat both Regnatus and Zargoth. He then left the universe, returning to the fourth dimension and fighting alongside the Vyro'Narza to prevent the Vyro'Ralza from destroying other universes.

As a Vague, Dakster's appearance is only barely distinct from the other Vague. He notably wears similar armor to that which he wore in life. Other armor worn slightly resembles the Kormacvar, raising suspicions he shares a body with a Kormacvar warmaster. Dakster often appears taller than most Vague, but due to their ability to change height at will, this often does not matter too much.

In life as an Ottzel, Dakster typically wore very thick nano-engineered armour outfitted with energy blades. He was known for his war scars, that had become symbolic among the Ottzel, and for his hardened appearance.

In the Vague, Dakster is vengeful and hateful towards Zargoth, but also incredibly passionate. Described by many as a vigilante, Dakster believes very strongly in justice, and wishes to protect the Ottzelloans he holds dear. Dakster feels mostly guilty for his days as an Ottzel, feeling that he was very naive, being not opened to the evil and the injustice that is seen in the universe. He felt that, once opened to Zargoth's torture, and seeing all the timelines of this universe, that he had been "awakened" to it.

As an Ottzel, Dakster was also driven partially by revenge in his youth, though as he grew older he became a respectable leader of his people. Though the Ottzel were traditionally supremist, Dakster was opposed to any form of Ottzel supremacy and refused to own slaves. He was therefore seen as far more noble than the rest of his species.

Dakster's equipment as a Vague consists of armor he wore as an Ottzel, but it is functionally useless, and provides him no boosts in combat.

Dakster's armor as an Ottzel was nano-engineered and made of the richest materials. He was equipped with a shield generator and a plasma weapon at all times.

Like all Vague, Dakster's body appears to be made of an incredibly hard metal, which makes him almost invincible. Dakster's weapons are known to be capable of annihilating foes by separating their atoms completely. As he is extra-dimensional, his true abilities are probably greater, and are largely unknown.

Dakster, in his Ottzel form, had no special abilities.

“Meddlesome insect! You will pay for your insolence!” 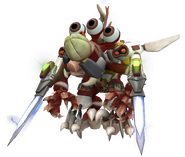