CORVEXA
Soldier of the Republic

“For me, there is no glory in war. I fight because it is my duty to protect the citizens and the ideals of the Republic. We will never give up. We will never surrender.”

Corvexa is a female Katharon who serves as the Commander of Banshee Squad, an elite Republic Special Operations team serving the army of the New Cyrannian Republic.

A born leader, Corvexa is considered to be one of the Republic's greatest soldiers—inspiring great loyalty in those under her command. Born on Orbispira in 28 BNE, Corvexa joined the military of the United Republic of Cyrannus at an early age, eventually garnering an impeccable service record as a distinguished markswoman and a capable trooper. Fiercely loyal to the ideals of the Republic, Corvexa is patriotic and hates the Empire with a passion rivalled by few.

Corvexa's impressive records details her involvement in battles ranging from the Battle of Orbispira, the Siege of Vasuband and the Liberation of Concordia, defending the Republic from any threat which arises.

A female Katharon, Corvexa was born on the galactic capital of Orbispira in 28 BNE, a time of peace and prosperity for the United Republic of Cyrannus—a government she grew to support with every fibre of her being. Joining the Republic Army as an officer upon the onset of the Great Cyrannus War, Corvexa had attained the rank of corporal by the close of the galactic conflict's second year, serving on board the Guarlara during many of the greatest ground battles of the conflict. By the time the final Battle of Orbispira was waged, Corvexa had been selected by General Anqual Gahan to Republic Special Forces, while remaining on the Guarlara under the captaincy of Daven Athias. During the battle, Corvexa and her squad mates were involved in a risky mission to capture a Confederate dreadnought leading the invasion of the Senate District, ultimately emerging successful in commandeering the vessel and bringing it under Republic control.

After the battle was won, the Republic was quickly subsummed by the Galactic Empire of Cyrannus. Shocked and outraged, Corvexa advised Captain Athias to flee to the Quadrantia Colonial Sector, which had remained loyal to the Republic Senate and President Apollo despite the rise of Tyrómairon. Quickly fleeing from a pursuing Imperial fleet, the Guarlara was chased out of the Core Worlds before disappearing through the Quadrantia Wormhole. For the next three years, Corvexa served the so-called "Republic in Exile", specifically by overseeing the security of the capital Apatalore.

“You can rest when you're dead! Onwards—for the Republic!”

Corvexa gladly continued her service with the formation of the New Cyrannian Republic in 03 NE, first seeing service in the campaign against the sinister Rihanae Pact, an alliance made up of the Jenassian Regency and the Regellis Star Empire in opposition to Republic expansion in the Unknown Regions. Corvexa served valiantly during the conflict, and would ultimately be promoted to the rank of Commander of a newly formed division of Republic Special Forces—Banshee Squad. Along with her second in command, an Ausare named Aiera, Corvexa would also serve in conflicts ranging from the Incursion of the Scelus to the Battle of Lolan. However, she would truly become a war hero with the Siege of Vasuband, during which she begrudingly fought alongside the Imperials against the Cyrannian Imperial State.

Corvexa and the rest of Banshee Squad would be granted brief R&R on the vacation planet of Warrón before being assigned to the Phoebus-class Star Destroyer Concord under the command of Captain Onon Vebbar, where they would be rotated to Concordia to liberate the planet from the claws of the Cognatus Empire. Though the battle would be bloody, the Republic and its allies ultimately emerged victorious over the zealots, with Corvexa raising the flag of the Cyrandia Alliance above the Parliament building in the capital city of Cynaserine.

During the closing stages of the Cold War, Commander Corvexa was chosen by Army General Elaen Minerchae to attend a meeting on Aldár to discuss ways to destroy the Empire's newly deployed superweapon known as the Ecimaex Wall. Travelling with Agent Rhavor Aldorón and the crew of the Auethnen Raptor, she infiltrated the Ecimaex flagship, the Silencer, planted explosives and aided the group in capturing Imperial Captain Nirndal. By the time they arrived back at the Republic fleet, the Battle of the Ecimaex Wall was won, though they soon received word that Mou'Cyran had been destroyed by the Empire. Travelling back to Aldár, Corvexa escorted the newly appointed President Apollo to a war council, where the Battle of Cadian was planned.

Throughout the opening stages of the Second Great Cyrannus War, Corvexa and her team fought on dozens of worlds across the galaxy. During the pivotal Battle of Coruanthor, Corvexa and a team of Republic Special Forces hid behind enemy lines and stole three heavy Imperial walkers to attack from their flanks. In the process, she captured Grand General Valtor Halfaxi, crippling Imperial efforts in the southern regions of Coruanthor.

During the pivotal Battle of Achiliquin, Corvexa worked with the Aldárae knight Arasah Nui during groundside operations against the Imperial hold over the planet. While Corvexa's tactics almost won the day for the Republic during the battle, the unexpected arrival of the Phaedric Lord Maethoruin turned the tide in favour of the Empire, though only momentarily. Retreating with her forces, Corvexa linked up with the remnants of the Achiliquini defence army, and with the timely arrival of a Republic fleet in orbit, proved instrumental in securing victory against the Empire.

After the Fall of the Twelve Worlds, Corvexa and the crew of the Thunderclap went into hiding, striking out against Imperial forces where they could. Ultimately, Corvexa and her crew joined with Admiral Quarantar's Revanchists, which in turn joined Apollo's New Republic Remnant prior to the Battle of Harborage.

Corvexa remained in the Remnant’s service following the Battle of Harborage, participating in the Liberation of the Twelve Worlds, during which she fought alongside Aoirtae Valaeris and Kara Inviá in taking Capricaerón back from supporters of the Imperial puppet Zare’Anne. Following the liberation, she participated in the climactic Great Battle of Orbispira, during which she bravely fought in the great charge to the Imperial Sanctum. Despite suffering some minor injuries, Corvexa lived, fighting in dozens of battles throughout the remainder of the war.

As of the Cyrannian Cold War, Corvexa is usually seen outfitted with the new standard issue armour of a Special Operations Republic Trooper, a white and orange armour with a "T" shaped visor—which through a connection to the HoloDomain, provides a heads up display during battle. The armour itself augments the power of Corvexa to several times her natural strength, while simultaneously allowing her to use thrusters and artificial intelligence contructs within her armour to gain the upper hand during battles. Beneath her armour, Corvexa is a well-built Katharon, with tipped ears and piercing yellow eyes.

“It is an honour to fight for the principles of the Republic.”

A born leader, Corvexa inspires great loyalty in her subordinates, particularly those lucky enough to be deemed effective enough to join the elite Banshee Squad. Extremely loyal to the ideals of the Republic, Corvexa's patriotism is unquestionable, as is her willingness to lay down her life for the Senate, the President and the people of the Republic. As such, Corvexa utterly despises the Galactic Empire of Cyrannus—believing that the Republic is the galaxy's only hope for lasting peace and prosperity. Indeed, Corvexa would argue that the kindness of the average Republic citizen and the lengths they are willing to go to defend freedom and democracy from the march of tyranny and imperialism. 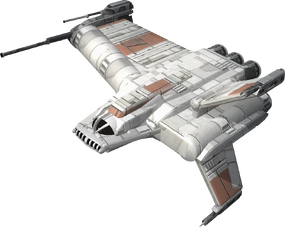 “The people I fight for.”

“Something on your mind?”

“Her service record is most impressive. I look forward to seeing you in battle.”