Commissar Commander of the Empire

Aerlon Cyredrae is a leading captain of the Cyrannian Radeons and an important commander of the Imperial Navy altogther. Mandator Agnassana trained him personally for years, making Aerlon an extension of her will, a sword in her hand that punishes those who opposed. Being known for his fanaticism and fierce temper even before as an URC captain, Aerlon quickly became a respectable Imperial commander upon Tyrómairon's rise to power.

Now, during the Dark Times, Aerlon is rooting out Wexord rebels in the Anastasis sector. However, Agnassana also prepares for something greater for him.

Aerlon's childhood was rough and bloody, being born on a faraway colonial wild world where he had to fight every day in order to survive. In his home, a single error committed by a colonist could result in a swift death of many, resulting in his extreme paranoia and obsession with punishment. After the War of Ages where most of his species was destroyed, Aerlon has decided to find his fortunes in the United Republic of Cyrannus, where he has met the charismatic Radeon speaker, Agnassana. Intrigued by her ideas, he has sworn to her, becoming her closest follower. During Agnassana's rise to power, she used Aerlon to eliminate her Cyrannian Radeon opponents and perform other dark deeds for her rise to the title of the Republic senator.

After Aerlon's mistress' successful promotion, he has become a political officer of the newly formed Miragnan Republic (a member state of URC), leading the Cyrannian Radeon forces against the innocent Wexord natives, fiercely loyal to Agnassana. He was fighting the Confederate forces in the Anastasis sector during the Great Cyrannus War, where he has gathered the reputation of a fearless and fearsome commander, bringing as much dread to his foes as to his own subordinates, for Aerlon was more than willing to execute hundreds of his soldiers for cowardice or disloyalty. After a successful Anastasis campaigh, Aerlon and his Radeon batallion was sent in various places in Cyrannus Galaxy, battling the Confederate presence. Over time, he developed a growing hatred to the CAS, seeing them as rebels against the Republic's rule - and to Aerlon, rebellion was the worst crime possible. His joy was great when the CAS was ultimately defeated after battle for Orbispira and the elimination of Confederate leaders by Meketanor.

As Emperor Tyrómairon formed the Galactic Empire of Cyrannus, Aerlon was quickly noted for his skills and talents by the new government. Commissar himself certainly approved the new policies of Tyrómairon, who seeked to instate a new era of order that would certainly please Aerlon. However, he was disappointed when Zillum, a former commander of the Confederacy, was chosen to be a supreme commander of the Imperial Navy, still having great prejudice against the CAS.

Nowadays, Aerlon is hunting the Wexord and Radeon rebels in the Anastasis sector. However, Agnassana has her own plans on him, preparing to increase her own authority and respect in the eyes of the Emperor. These plans were, however, foiled, when Tyrómairon became aware of Agnassana's scheming, sending an Imperial armada to punish her for her attempt to rebel. Aerlon, ultimately loyal to the Empire and not Agnassana, has revealed her location, leading to him becoming a temporary ruler of the Cyrannian Radeons until a new Mandator would be chosen.

Above all, Aerlon is extremely obsessed with law and order, following Imperial codes and his superiors' will to the letter. He never tolerates cowardice or laxity, and is always ready to shoot those who run from combat without any mercy. His very presence is said to bring fear to his Radeon soldiers, being a figure of terror and respect. Despite this, however, Aerlon possesses certain redeeming qualities, such as genuine care for his subordinates - Aerlon always leads the armies from the frontline, inspiring the Imperial troops with his own heroic acts to bolster their morale.

Aerlon possesses a great prejudice against the species of the former Confederacy like Mortalitas, Wexord or Tiranozark, due to his experiences in the Great Cyrannus War, although he is still able to tolerate them if required. He is also fanatically loyal to his superiors - both his direct mistress, Mandator Agnassana, and Emperor Tyrómairon. However, recently he began to doubt Agnassana's intentions, fearing her rebellious tendencies.

In battle, Aerlon is a deadly foe. While not really strong for a Cyrannian, Aerlon compensates that with his speed, agility and spirit. He has mastered the skills of vibroblade combat, using this light and swift weapon together with his natural Radeon abilities with great efficiency. He once claimed tht he decapitated five Mortalitas warriors with this blade, and this is not mere boasting, for it is quite possible he actually did this. His abilities to command are great as well, and he prefers bold, quick but decisive and coordinated strikes that led to destruction of many his enemies.

The Longknife, the first spaceship commanded by Aerlon during the Great Cyrannus War, was destroyed in its third year by the Confederate forces. 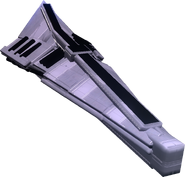 The Sword of Justice was second Aerlon's spaceship, being used for the short period during the first year of the Imperial Era. It as used during the Battle for Miragna.

Increscent is the current spaceship of Commissar Aerlon, given to him by Imperator Tyranus after his help in deposing Agnassana.
Add a photo to this gallery

“You understand my path of justice.”

“I do not trust you enough yet.”

“Drive me closer, I want to hit them with my sword!”

Mini-portrait
Add a photo to this gallery

“A pleasure to serve with you Radeon.”

“Perhaps the Radeon's aren't as hopeless as I thought.”

“Rat Xeno... You better be of use for destroying Apollo...”

“A fellow Commander, hail the Empire!”