Commandant of the Borealis Grox Empire

“Your existence offends me.”

Commandant Khensu was the Marinox commandant of the Borealis Grox Empire.

Khensu was carefully built by King Mirras III himself to serve as the leader of the Marinox legions of the Borealis Grox. After he was built, Khensu led multiple assaults against several aliens who lived in Borealis's IInner Core, particularly those who could potentially grow into galactic powers in the near future. His wave of carnage eventually met and clased with the Zoles Imperium.

Khensu was one of the major Grox leaders during the Great Purging, being responsable for great part of the damage caused to the Zoles Imperium before Mirras III himself entered the event. Khensu then spent the rest of the war's time in expanding the Borealis Grox Empire into the Outer Core region.

With the defeat of the Marinox in the Battle for Planet Kaizox, Khensu shorted out and died like all Marinox. However, King Mirras III gave him a new life with a new Life Generator a few days later, as he already believed the Plazith Grox would fall in war.

Khensu's participation in the early stages of the Second Borealis Galactic War was minor. Along with Mirras III, he merely watched as the factions of the galaxy waged war against each other. Khensu would at one point find a Vague spaceship in one of the Grox's planets, salvaging it for himself.

Khensu became really active duing the Wrath of Gods, when the Grox were revealed to be under control of Regnatus. Khensu appeared to the forces of the Polar Crystal Alliance and kidnapped Hachiman, before quickly escaping. He would then continuously taunt the Alliance, while using Hachiman as a toy and experiment for himself.

This all eventually led to a battle inside the Borealis Vida'Rranlora Database, where Khensu and Hachiman fought together against the Alliance. At first incapacitated by Sarec, Khensu's body was possessed by Regnatus, activating his true form. In a very close battle, the Alliance managed to activate the Database's internal defenses, using them against Khensu.

Being overwhelmed by attacks from the Database's Dream Energy weaponry as well as the Alliance, Khensu was finally killed, his body falling into the ground and turning into ash, bringing an end to the Marinox monstrosity.

Khensu differed from other Marinox for having blue skin and white stripes, similar to Mirras III. He also possessed more cybernetic enhancements than other Marinox.

His true form appeared as a large, black-blue Marinox with mechanic-organic spikes growing from his body, with shining blue eyes and scars around his skin, possibly originated from experiments.

Khensu was a vile Marinox who shared his personality with King Mirras III, meaning he was highly manipulative and sadistic. Khensu felt pleasure in his enemies' suffering, something unusual for a Marinox, as well as showed incredible intellect. He could extend his will to the legions of slaves around the Borealis Grox Empire, as well as some lowly Grox citizens, via a special type of psychic field. Mirras III and Khensu were later confirmed to shame a group mind.

Khensu's body was equipped with several weapons, including pistols and rapid fire machine guns. Khensu was equipped with heat-maintaining machinery, allowing him to fight in the coldest terrains. Khensu also possessed extreme amounts of psychic power on his body, capable of disrupting most equipment. Like all Marinox, Khensu was extremely agile.

When activating his true form, Khensu's already monstrous agility and speed grew even more, and he was capable of launching psychic blasts from his mouth in a similar way to fireballs, which hit enemies with explosive force and bypassed their shields. 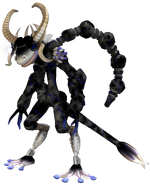 Retrieved from "https://spore.fandom.com/wiki/Captain:Commandant_Khensu?oldid=652162"
Community content is available under CC-BY-SA unless otherwise noted.