For the glory of the Empire!

“All dissidents and rebels will be executed. Painfully.”

Carandial is one of the current Grand Admirals in the Imperial Navy, and represents Basileus interests in terms of the Imperial Military. Carandial served as one of the Tyranus's most trusted advisers, though did not support Basileus membership in the Confederacy of Allied Systems, instead goading Tyranus into forming the New Basileus Empire. Though it only lasted for a few months, Carandial served as it's highest ranking officer.

When the Galactic Empire of Cyrannus was formed, Carandial was delighted at the power it offered the Basileus and became a Grand Admiral, the highest ranking naval title. Like many of his race, Carandial is quite condescending to those who views as his lessers and yet is quite popular among the other officers in the Navy. Nevertheless, as his years in the Empire's service accumulated over time, much of his previously specistic ideals have dissipated. Despite being a high ranking Basileus, Carandial remained uninvolved with various Basileus-led coups against the Empire since its formation, even acting against own friend Tyranus when he worked against the Emperor. When the Cyrannian Imperial State was formed, Carandial declared their status as rebels and became quite keen to hunt down their leadership and execute them within the halls of Vasuband itself.

Carandial is currently the commanding officer of the Imperatore, an Imperium-class Star Dreadnought serving as the proud flagship of the entire Empire, currently undergoing a campaign dubbed the Reconquest of the Rim in the aftermath of the Impeiral State's fall.

Carandial was born on the Basileus homeworld of Vasuband in an era of prosperity and general peace for his people. However, his early life and details on his family are currently unknown, with Carandial first coming to public attention during the rise of power of Tyranus, where he served as an advisor to the aspiring leader, who eventually grew to hold the position of Imperator, the equivalent of emperor in Basileus culture. Over time, Carandial was promoted to the position of Supreme Commander of the Imperium's navy, leading his people into battle on many occasions.

Although he advised against it, the Basileus eventually joined the Confederacy of Allied Systems and were eventually dragged into the Great Cyrannus War. He fought in many battles, but never felt any loyalty toward the Confederacy, instead helping to goad Tyranus into creating the New Basileus Empire. With his new armies and power over the Basileus military, Carandial led his people into many further battles against the United Republic of Cyrannus, until the war ended with the formation of the Galactic Empire of Cyrannus.

Pursuant of the Artifacts

“The Emperor wants the artifacts in this planet. Failure is not an option.”

When the Empire was formed, Carandial, like the vast majority of Basileus decided to join, being offered the position of Grand Admiral in the Imperial Navy, gaining command of a deadly new starship, an Executor-class Super Star Destroyer he dubbed the Empirical. He was tasked with the Outer Rim protection, with one of his first assignments being bringing the rebellious Agnassana to justice on Orbispira. Later, Carandial began to grow impressed with the young Alavar named Rela Loupál and took her under his wing. When the third year of Imperial Rule began, Carandial learned of an ancient treasury trove deep in the territory of the Neraida Gigamatrix. In the hopes of gaining the planet's treasure and as a test for Loupál, he sent her to lead the mission.

During the first weeks of 03 NE, Carandial's former ruler Imperator Tyranus began to concoct a plot against Tyrómairon and the Empire in the hopes of bringing about Basileus galactic rule. Tyranus approached Carandial to share in the plot, but the Grand Admiral dismissed it as utter nonsense doomed to fail. However, out of respect for the Imperator, he didn't report him to the authorities. As Carandial predicted, the plot failed and Tyranus was killed by the Emperor.

As the New Cyrandia Wars began, Carandial was sent to the front lines in the Outer Rim in an attempt to curb the advance of the Cyrannian Imperial State deeper into Imperial territory. This led him to the Saurornithantan homeworld of Carinateron, where his fleet was successful in repelling the rebellious Zillum from the world.

Maiden Voyage of the Imperatore

“Crew of the Imperatore, this is your Admiral. Today we launch the flagship of our mighty Empire, a colossal testament to the power of our civilisation, the majesty of our Emperor and the virtue of our citizenry. We are tasked with the extinction of those who would subvert our Empire, those who would seek to turn us against each other and fan the flames of rebellion throughout our peaceful and orderly galaxy. No more!”

As the New Cyrandia Wars went on, Carandial became dismayed that while once the other species of the galaxy began accepting the Basileus as equal Imperials, the rebellion primarily caused by Basileus was once again giving them a nasty reputation. To his surprise however, Tyrómairon himself promoted him to command the flagship of the Empire in the form of the ICS Imperatore in order to combat the Imperial State after the key rebel victories over Abrion and Tyranikus. Immensely proud that the Empire would reward a Basileus of all beings, Carandial swore that he would track down and destroy the rebels.

When he became acquainted to his first officer Captain Rh'vaurek, Carandial immediately took command of the Imperatore and travelled to Abrion, where a rebel fleet under the command of Chathanglas remained after conquering the world several weeks previously. The resulting battle saw the Imperatore completely wipe out the enemy fleet with a single blow from the matter cannon, incinerating dozens of top-of-the-line State vessels and thousands of rebel lives. With Abrion back under Imperial control, Carandial allowed his crew to celebrate their stunning victory and after reporting back to the Emperor was sent to the front lines of the Southern Outer Rim.

“All ships, initiate pattern delta. Bring your ships directly against the State flotilla. We will broadside them into oblivion!”

- Grand Admiral Carandial commanding his fleet during the Siege of Vasuband.

Over the next several months, Carandial would become the most feared individual in the galaxy to the citizens of the Imperial State, utilising the vast power of the Imperatore to annihilate hundreds of State worlds and fleet positions. By the closing months of 05 NE, he had led Imperial forces in the Southern Outer Rim to the very fringes of the Vasuband system. At this stage in the conflict, both the New Cyrannian Republic and Rambo Nation had joined the Empire after a failed attempt by the State to incite a new Great Cyrannus War between the Empire and the Republic.

Gathering the allied leaders on the Imperatore, Carandial expressed his disdain openly about involving the other two powers in a primarily Imperial affair, though as the battle drew on he grew to begrudgingly respect both the Republic and the Rambo for their bravery against the Imperial State. By the time the battle in space had been won, Carandial faced opposition from Inquisitor Akagêlth of the Imperial Inquisition who desired to assume control over the Imperatore to obliterate the planet.

Standing his ground, Carandial refused to allow the Inquisitor to usurp his command, ordering him to the planet's surface for the final siege of the State's capital city. When the battle had ended, Carandial traveled to Imperator Tyermaillin's office to find the former State leader unconscious thanks to a blow to the face by Grand Mandator Erissare. Discussing the future of the galaxy with the gathered Imperial commanders, Carandial informed them that Grand Mandator Taev Vosaetiur had commanded Tyermaillin to be trialed on the Cyrannic Imperial Battlestation. Before leaving, Erissare gifted Carandial the Dvottie known as Mr. Bigglesworth, the former pet of both Tyranus and Tyermaillin. Several months after the war, Carandial was pleased to learn about the resurrection of Tyranus by the Emperor himself. Now a loyal Lord of the Empire, Tyranus regained the respect of Carandial, as well as ownership over his beloved Dvottie companion Mr. Bigglesworth.

Over a decade after the end of the New Cyrandia Wars, Carandial was assigned to defend Basileus Space against any potential incursions by the New Republic, upon the onset of open warfare between the two galactic powers. However, when faced with an unexpected invasion by the Corruptus, Carandial's armada was forced on the defensive, and despite the power of the Imperatore, Vasuband and the majority of the Basileus throneworlds were lost to Mar-Júun's demonic forces. However, toward the end of the conflict, Carandial returned to Vasuband in the midst of a calamitous battle between the Republic and the Corruptus, and utilized the destructive power of the Imperatore's hyperlaser to annihilate the Corruptus armada. After the end of the battle, Carandial spoke with the Phaedric Lords Moranonúngur and Archaxys, and to his considerable chagrin, presided over Grand Mandator Erissare's return to power.

Carandial is a typical male Basileus with regard to his appearance. He is adorned in crimson scales across his body, indicating his Vasubandian heritage. Individuals that encounter Carandial are often struck by his piercing red eyes which they often claim he uses to penetrate into their very minds. However, while Carandial possesses no such ability, he is known to use his eyes to strike fear into the hearts of those who displease him in some way. As a Grand Admiral in the Imperial Navy, Carandial has chosen to forego typical Imperial uniform regulations in favour of a more traditional Basileus design, an example of his superiority complex.

Embodying many of the traits that make his race, the Basileus, so infamous, Carandial is condescending, sarcastic and harbours a distaste for non-Cyrannians, though he can bear working with any being from the Cyrandia Cluster. As one of the most efficient officers of the Galactic Empire of Cyrannus, he is often sent on missions of great importance to the interests of Imperial security, with the crew of his flagship, the Imperatore being considered some of the greatest in the entire Imperial Navy. As an officer, Carandial is loyal to his superior officers, though isn't above manipulating them into proceeding into a course of action that would benefit his career. Though he generally doesn't see the need in friendships, he was often seen as the closest confidant of Tyranus, sharing many similar interests to the Grand Mandator, having known him since childhood. Despite his manipulative tenancies, Carandial is an ardent Imperial patriot who would never willingly act contrary to the Empire's interests.

“The Imperatore is truly a worthy extension of Imperial majesty.”

The Imperatore is a Nemesis-class Star Dreadnought serving as the flagship of the Imperial Navy. A 60,000 metre long psychological terror, the Imperatore was primarily designed to subjugate entire civilisations without even firing a blaster. The primary weapon of the Imperatore is a coaxial hyperlaser capable of destroying an entire planet, as well as ripping apart space-time itself when placed at a higher setting.

Many in the Navy believe that the Imperatore is overkill for a job that can just as easily be done with a squadron of Imperial Star Destroyers, but others believe that they are worth the expense, pointing to the role of the Imperatore in annihilating entire fleets of Cyrannian Imperial State rebels as well as leading the charge against the remaining rebels on Vasuband. 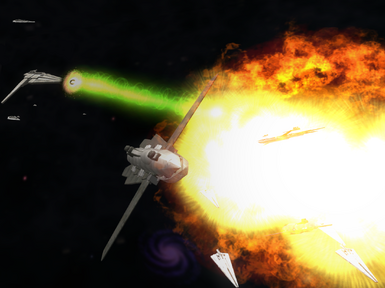 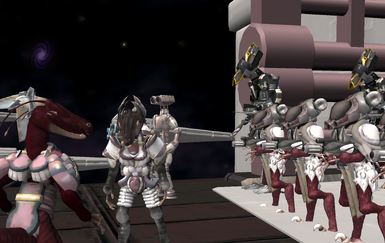 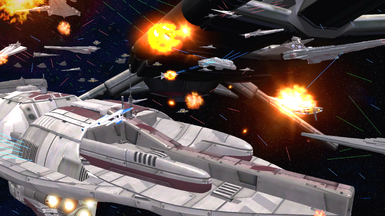 “A valiant warrior, no doubt.”

“A trusted advisor and friend.”

“He has my respect.”

“I'm more deserving of his rank than him.”

Retrieved from "https://spore.fandom.com/wiki/Captain:Carandial?oldid=795304"
Community content is available under CC-BY-SA unless otherwise noted.