This galaxy will soon know the Primercer's power.

“This galaxy will soon know the Primercer's power.”

- The Blade of the Primercer

The Blade of the Primercer was a male Cogsangui who sacrificed all he has ever known, including his name, his family and his life in the Battlefleet of the Cognatus Empire to serve as the foremost assassin of the Primercer, an ancient Oikoumene entity who usurped control over the Cognatus during the Dark Times. Though born as an unusually kind hearted Cogsangui, the Blade was corrupted by the Primercer's overwhelming power into becoming a sadistic and unwaveringly loyal tool used to crush the Primercer's enemies, standing as a noted enemy of the acolytes of the Dark Lord's Mornûnendur.

Though he served the Primercer loyally throughout the New Cyrandia Wars, he eventually met his end in honourable combat at the hands of the Phaedric Lord Maethoruin during the Battle of Cognalorilos in 05 NE.

The Blade of the Primercer was born under a name he has since disavowed, on a planet he no longer remembers to a family he would kill on a moment's notice if it should satisfy his Oikoumene master. When he came of age, his patriotism drove him to join the military of the Cognatus Remnant, which he was proud to serve as a functional member of the Cyrannian community. However, when the Remnant fell and the Cognatus Empire rose in its place, the Blade became increasingly disillusioned and sustained himself only through his faith that the gods would smile on his plight. In his eyes, his prayers were answered when the Primercer returned. Earning the good graces of the Oikoumene Lord, the Blade was subtly transformed into the being that became feared through the Cognatus hegemony as the most ruthless servant of the Primercer.

“Our Lord has commanded the destruction of these vile infidels. We shall show them who truly rules these stars. Aim for the bridge of that pathetic boat.”

- The Blade, ordering an attack on an Imperial Star Destroyer.

The Blade made his first move in 04 NE during the opening stages of the New Cyrandia Wars, when he led an assault on the Imperial world of Concord, destroying the Star Destroyer stationed there and kidnapping its captain. Bringing the Libertus to his flagship, the Blade contacted the Primercer for orders, who told his servant to carve the symbol of the Cognatus Empire into the captive's chest before beaming him to Orbispira. Obeying his master's order to the letter, the Blade became a public enemy of the Empire and to the Emperor himself, who decided to hunt the monster down.

The Blade's first mission against the Phaedric Order occurred on the planet Carthaniapian, where he managed to defeat the Inquisitor Charcar'maer before being defeated himself by the more powerful Agonânghâsh and Venatorius. In the aftermath, he was scolded by the Primercer but was also granted extended powers which he used to great effect against Venatorius and Meketanor during the Battle of Nandóband before being repelled by the awakened Maethoruin.

- The Blade's final words after his duel with Maethoruin.

During the Battle of Cognalorilos, the Blade coordinated the defences of Cognalorilos alongside Vos Adamae but was ultimately caught unaware by the joint Unified Order of Cognalorilos/Imperial invasion of the planet. After the fleet was destroyed in orbit, the Blade faced down the Phaedric Lord Maethoruin in a vicious duel he came close to winning at several times before being finally cut down by Maethoruin's blade. The Phaedric warrior comforted the Blade in his final moments, as he struggled to remember his original name before finally dying.

Several hours later, his fate would seemingly be shared by both his master and Qulmé while the Blade of the Primercer became a name recognised only by Maethoruin, who respected the strength and power of his vanquished foe.

The Blade of the Primercer was once a kind and well-meaning Cogsangui, who placed great faith in the religion of the Cognatus empires and the tenants on which his civilisation was built. Though considered peaceful by the standards of his kind, the Blade's faith turned to fanaticism under the influence of the Primercer, who used his cunning Ultraterrestrial intellect to transform the young Cogsangui into a ruthless and sadistic assassin. The Blade viewed the Primercer as a Supreme God and that any transgressions against him was sacrilege of the highest order. Like the acolytes of Tyrómairon, the Blade was infused with a limited degree of Ultraterrestrial energies though the Cogsangui servant of the Primercer relied more heavily on his infamous blade, having a particular proclivity for decapitation.

Once considered to be handsome, the Blade of the Primercer since became a hulking beast garbed in a dark cloak that hid most of his features, with the exception of his dreaded mandibles, which writhed and clicked to the fear of those in the Blade's presence. The Blade was tall even for a Cogsangui, standing nearly five metres tall and exceeding that number when his elaborate head ornamentation was factored in.

“Serving you is an honour, my Lord.”

“You are safe so long as you avoid the Primercer's wrath.”

“The cosmos will be stained crimson with your blood.”

“My Master's power exceeds your own!”

“An instrument. Blunt, as it may be. Nevertheless, it is useful.”

“Our "Lord" surrounds himself with unsavory pests.”

“Your Master's path is fraught with peril. Serve him if you will, but it matters not. The Primercer's hubris shall not save you from the abyss which awaits those who offer him fealty.”

“The Blade, a weapon wielded by our Gods!” 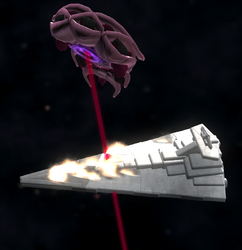 The Blade destroys an Imperial Destroyer.
Add a photo to this gallery

Retrieved from "https://spore.fandom.com/wiki/Captain:Blade_of_the_Primercer?oldid=716539"
Community content is available under CC-BY-SA unless otherwise noted.