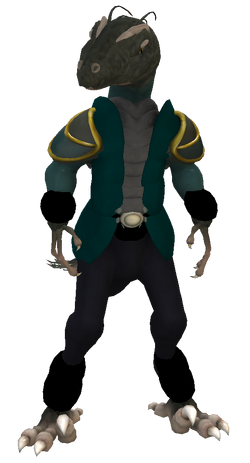 I serve the principles of the Cyrandia Alliance, nothing beyond that, I assure you...

New Cyrannian Republic
Cyrandia Alliance
“Idealism and rhetoric can only go so far. The New Republic may be paradise, but even paradise has need for people willing to do what needs to be done to ensure our prosperity and rightful place in the Gigaquadrant.”

- Cyrellon, confiding with a diplomatic attaché

Ansin Cyrellon was a male Libertus who served as the United Republic of Cyrannus ambassador to the Cyrandia Alliance during the Great Cyrannus War and much later, as the New Cyrannian Republic ambassador to the Lianna Initiative during the New Cyrandia Wars. Efficient, unscrupulous and cunning, Cyrellon maintained a public persona as a warm and well-meaning individual, hiding his true motives for greater power to all but his close circle of followers allied in a near-sycophantic loyalty to the charismatic statesman.

During the Dark Times, Cyrellon went into hiding, though re-emerged when the New Republic was formed, aiming to restore his power. His schemes would culminate during the Second Great Cyrannus War, when he worked with Zare'Anne from within to bring down President Apollo's government. During the Fall of the Twelve Worlds, however, moments after his scheme was revealed, he was executed by the Phaedric Lord Venatorius—as an example to Zare'Anne that his newfound rule of the Republic was by the Empire's whim.

Born on the highly populated Inner Rim world of Coravannis in 39 BNE, Cyrellon was forced to make his own way through life at an early age when both his mother and his father were killed in a speeder accident when he was a small child. Nevertheless, even before this life changing event, the young Cyrellon claimed that he had little in common with his parents and was thus relatively unfazed by their untimely departure. Thus, from a young age Cyrellon quickly learned about independence as well as the harsh realities of life in which the weak perish and the strong prosper. Even on the massive city-dominated world of Coravannis, Cyrellon longed for ever greater things which ultimately led him to the galactic capital of Orbispira, where he represented his homeworld as one of Coravannis' minor planetary legislators, eventually becoming Senator in 12 BNE.

As senator, Cyrellon quickly grew a powerful base in which the representatives of smaller and less important systems would be forced to vote in line with his desires rather than the needs of their worlds, though the Senator himself was discreet to the point where only a few became aware of this subversion of the democratic process. Nevertheless, he continued these methods for many years until he was finally appointed the Republic Ambassador to the Cyrandia Alliance in 05 BNE, affording him a high level of power within both Republic and Cyrandia circles.

Upon the fall of the old Republic and the rise of the Galactic Empire of Cyrannus, Cyrellon disappeared from the radar of Imperial officials, though some elements of Imperial Intelligence reported that the crafty diplomat returned to his homeworld of Coravannis before fleeing into the unknown, eventually settling on the neutral planet Coruaan, where he once again built up his political influence amongst the planet's government. When the New Cyrannian Republic was formed, Cyrellon rejoiced in the return to a system of government he could easily mould to his desires and emerged as a powerful political figure in the Republic's halls of power. In 05 NE, Cyrellon was chosen as the Republic's ambassador to the newly formed Lianna Initiative, which he viewed as a key stepping stone toward a rebirth of the Cyrandia Alliance.

During the Second Great Cyrannus War, Cyrellon worked to utilise the chaos to his own benefit, positioning himself close to President Apollo to undermine his efforts from within. In his quest for greater power, he scorned the tactics of Praesator Adelheidis and her True Republic, and instead allied with the ruthlessly pragmatic Zare'Anne, conspiring with him to bring down Apollo's government and end the war on their own terms. After acquiring a substantial power base, including Confederate senator Coth Saeno, Cyrellon aided Zare'Anne in supplying the Empire with the clearance codes for access to the Twelve Worlds' strictly regulated hyperspace buoys, directly leading to the Fall of the Twelve Worlds.

However, his hubris would be his undoing. When the Empire stormed the Presidential Pyramid, revealing Zare'Anne's betrayal, Cyrellon stepped forward and raised his pistol at Apollo, claiming that the Republic would only survive if it agreed to the Empire's terms. They would be his last words, however, as the Phaedric Lord Venatorius drove his blade through Cyrellon's chest, killing him to signify Zare'Anne's powerlessness over his new regime.

Cyrellon was an unscrupulous and power-hungry politician quite unlike the typical New Republic public representative, who tend to embody an enlightened ideal about how the representatives of a democratic civilisation should behave. In this regard, Cyrellon was quite atypical. Though he did share a sense of patriotic loyalty to the New Republic, Cyrellon was generally interested in furthering his own goals and if they work to the betterment of the Republic, so much the better. To the electorate however, Cyrellon pulled off a successful persona of a caring, diplomatic politician unafraid of standing up to powers such as the Galactic Empire in negotiations.

As the official Republic representative to the Lianna Initiative, Cyrellon was keen on using his influence to reform the Initiative into a new Cyrandia Alliance, for no other reason than to ensure his own political ascendancy. Nevertheless, despite these negative characteristics, Cyrellon did possess redeemable qualities, including an unparalleled work-ethic and a genuine desire to see the New Republic succeed.

“I'm a powerful friend to have.”

“Impress me. Failing that, make an impression.”

“I have no patience for the idiotic, the asinine and the pretentious.”

“Just as every government needs it's idealists to keep it's morality in check, so do they need their pragmatists willing to do what needs to be done in order to succeed.”