To ensure the universal peace.

The High Prograessor of the Oikoumene

“It is foolish to think of the world in black and white. I believe that sacrifices have to be made to ensure the better future of the entire universe; ultimately, inaction is the greatest vice.”

Angolmois was once an ancient and wise Oikoumene agent whose mission was to facilitate the advancement of various primitive civilisation across the universe as well as to protect them as a part of the Patronois pact. As a Prograessor, she believed greatly in the Oikoumene cause of guiding the younger species and was one of the most respected and high-ranked members of her agency, being paramount in the uplifting of many species in Cyrannus and beyond.

However, as the Oikoumene society was split due to internal conflicts, Angolmois ultimately chose the dark side, aligning herself with the leader of the Oikoumene military, Tyrómairon, believing his imperialistic ideas to be the only way to protect the younger species. After the Apotheosis, Angolmois vanished and is now nowhere to be seen, presumably sealed by the Oikoumene loyal to the Primercer, Tyrómairon's ancient adversary.

Angolmois' past is, befitting her species, cloaked in mystery; however, it is known that she is extremely ancient, having already been a respected member of the Oikoumene society five billions of years ago. As a High Prograessor, her mission was to infiltrate various primitive civilisations and uplift them from within; eventually, her determination, intelligence and strong belief in the Oikoumene cause drew the attention of the Primercer, who then assigned her to a special mission: to extend the Oikoumene's protection in galaxies beyond Cyrandia Cluster. Arriving in Andromeda, Angolmois found a species she found interesting: the Rades; after a short discussion with the Primercer, it was decided to bring them into the fold of the Oikoumene. The new Patronois species developed quickly and Angolmois considered them to be one of her greatest successes, developing a feeling of motherly affection towards the young Andromedans.

However, as the Rades had advanced to the point where they no longer needed protection, the Primercer decreed to grant them independence and accept them as equals in the intergalactic society. Though Angolmois was, at first, joyful of seeing her children prosper free, she then grew to resent the Primercer's decision; this resent magnified even more as the Rades vanished with the rest of Andromeda during the Last War, falling prey to their own curiousity and arrogance. The loss of what she percieved as her greatest success made Angolmois rethink her view on younger species; in some way, her desire to protect them grew stronger but her view of how to do this changed. Instead of merely guiding the primitive civilisations, she instead came to believe that they should be assimilated in the Oikoumene culture completely as a part of the universal brotherhood.

Eventually, Angolmois' imperialistic views drew attention of another Oikoumene with a similar philosophy, Tyrro'maironis, the leader of the Warriors of the Revelation. This, in addition to the grudge she had grown to harbour against the Primercer for allowing the Rades to die, made Angolmois join his side when Tyrómairon turned against the Oikoumene leader and a civil war started amongst their species. After this civil war, Angolmois vanished, presumably sealed by the Primercer's followers, and over the following eons, she was all but forgotten.

However, it is believed that Tyrómairon still remembers his old follower, planning to bring her back...

Angolmois looked notably different to other female Oikoumene, distinguished by her bright eyes and dark blue scales (considered beautiful by her species' standards), making her stand out of the crowd somewhat. However, she rarely used her true Oikoumene form. As a Prograessor, Angolmois often made contact with other, younger species and as such often used the shapeshifting ability innate to the Oikoumene in order to make them accept her as an equal. However, no matter which form did she take, she always retained a few set characteristics: she was always looking regal and courtly, surrounded by an aura of power and wealth; this reflected her appearance as an Oikoumene as well as her belief of her species' superiority.

Angolmois was considered by many to be somewhat similar to her colleague, Librae, who was, like her, facilitating the development of primitive species across the universe (though in a different way); however, in many ways, Angolmois was also her polar opposite. Although they both were strongly devoted in the Oikoumene cause of protecting younger species, Angolmois believed that the only way to do so was through force; deeming the Oikoumene as superior, she saw it as her burden to civilise more primitive civilisations of the universe, whether they wanted it or not. Despite this, however, Angolmois genuienly saw her views as the right thing and was compassionate - in her own way - towards all life.

“It's good to see that not everyone is blind in this universe.”

“My duty is protection.”

“I will not allow my work to be destroyed by the likes of you.”

“We are eternally grateful, the Grand Being.” 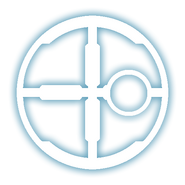 Angolmois's symbol.
Add a photo to this gallery
Retrieved from "https://spore.fandom.com/wiki/Captain:Angolmois?oldid=860639"
Community content is available under CC-BY-SA unless otherwise noted.