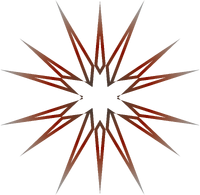 Codex of the Red Light

“When he exchanged our lives for an eternity of servitude, I came to believe such a responsibility was conflated with slavery. I came to believe that he is a cruel master, devoid of any semblance of morality. That is until I discovered...him. Krathazhrukhal may appear cruel, but even his greatest, most evil forms of wrath is a mercy compared to Angazhar's kindest act.”

Angazhar is one of the four Xhodocto, revered by many as the chief deity of Therusism. Where the other Xhodocto are of fluid and unfathomable morality, Angazhar is immutably and wholly malevolent; so much so that abhorrent godlike beings that serve underneath him unequivocally acknolwedge him as the most terrible of entities both imaginable and unimaginable. Angazhar is the creator and overlord of several infernal and horrific entities; the Xi'Arazulha, Samut'angar, as well as the Xhodocto Eyes which indirectly spawned Shu'rimrodir. As such, Angazhar is regarded as the primordial source of all evil that exists.

Though many entities in the universe and beyond are of a malevolent disposition, Angazhar's very nature is rooted in realms of an evil infinitely deeper than that of even the universe's greatest horrors. Many believe that Angazhar is in fact the personification of all collective evil manifest; though Angazhar's sphere of being is beyond the mere notions of a malevolent deity. From an ontological perspective, Angazhar is the embodiment of all change - however, the term 'change' is often conflated with Santorakh. Angazhar's specific embodiment regarding 'change' is sometimes termed with 'reduction' or 'destruction', but this extends beyond the nature of destroying living entities. Instead, such spheres may include ideas of evolution and transformation, including death and possible rebirth.

Though Angazhar may be an allegory for transformation and evolution, it is not known as to why he is a singularly malevolent entity. Theories rise around the idea that Angazhar exists merely as a singular counterbalance to concepts such as the Four Pillars. The creator of the Samut'angar and Xi'Arazulha, as well as the indirect cause of The Corruptus (and possibly the Ozax, Angazhar's creations too pose a direct counterbalance to the Four Pillars.

As is with the other Xhodocto, the names for Angazhar are used to refer to an entity that has no true name. The name 'Angazhar' is a corruption of the Krassim term angaz-which is translated into 'abhorrent', 'fiend' or 'devil'. The most common formal for Angazhar apart from this translation is Theruskrayathos, which is a Samut'angari agglomeration of terms that have no definite translation. Another common Samut'angari name is Kamik-Shi, which is typically translated as 'great inferno'. Angazhar is also named by a myriad of epithets, mostly in reference to his divine status. Revered as a god of war and violence, most or all of Angazhar's names reflect an entity of great cosmic terror.

As the manifestation of ultimate malevolence, Angazhar often takes forms of equal measure, unlike the other Xhodocto which often choose to manifest in lesser forms. His association with violence and bloodshed is often manifest in his forms - Angazhar is at the very least terrifying to behold in any form and unequivocally maddening in some cases. The very few who have communed with Angazhar - Lord Zhuleshxi, Hez'Kalka and Vorius to name a few - have only had brief glimpses into the horrors of Angazhar's being. Even in his lesser forms, Angazhar's voice carries immense gravitas and violent energy, so much so to cause pain in those who listen to it.

Much like the other Xhodocto, Angazhar's whims are unknowable. Many believe that Angazhar's ultimate intention is to destroy all semblances of reality, though in truth, Angazhar's intentions would not allow the final destruction of reality if it ended all violence. It is implied that Angazhar's creations can readily lay waste to entire dimensions without a hope of resistance, though it is not known why Angazhar allows this universe to endure - it is likely a byproduct of his continuing malevolence.