“Our work is peace.”

Amirtae Buroa is a female Libertus politician and diplomat who served as the fifth President of the New Cyrannian Republic, from 34 NE to 38 NE. She had previously served as Vice President during the administration of Kyrsá Nimrais, and was Senator of the Achiliquin Sector in the New Republic Senate.

The daughter of famed Confederate Senator Mioa Buroa, who championed for peace during the Great Cyrannus War, Amirtae seeks to do her mother proud by following in her footsteps, being one of the most pacifistic senators in the galactic congress on Mou'Cyran, and later Capricaerón, as a member of the Reformist faction. Though she is dismissed by some as overly idealistic, Buroa truly has the interests of the citizens of Achiliquin and the wider Republic at heart.

Buroa was one of the few senators to survive the Mou'Cyran Cataclysm and was involved in the emergency vote which led to Apollo's ascension to the Presidency. Though horrified by the Cataclysm, the destruction visited upon the seat of democracy steeled the once peaceful senator in the galactic conflict to come. She served as an important advisor to Apollo throughout the war, and was clandestinely involved in the resistance against Zare'Anne's Occupied Republic government.

After the end of the war in 26 NE, she became Vice President under Kyrsá Nimrais, and would later succeed her in office in 34 NE. President Buroa focused her administration on improving the quality of life on distant Outer Rim worlds, and made great efforts to improve relations with the Confederacy of Free Planets, cementing a strong alliance between the two galactic powers. Having committed to serving two terms, she did not contest the election of 37 NE, and was succeeded by Laoi Cretacea.

Born in 25 BNE on Achiliquin, Amirtae Buroa was born to the esteemed politician Mioa Buroa, a former Republic senator who defected to the Confederacy of Allied Systems during the Great Cyrannus War. During the conflict, Mioa was assassinated during a mission to promote peace between the Confederacy and the Republic, prompting Amirtae to seek her mother's vacant seat in the Confederate congress. While she was unsuccessful, she eventually won a seat in the Council of Achiliquin, which remained neutral when the Galactic Empire of Cyrannus was formed in 01 NE. When the New Republic was formed in 03 NE, Amirtae sought to join it, and was instrumental in Achiliquin's ascension to Republic membership.

Buroa: "B-but, what chance do we have? I know nobody wants to hear it, but someone has to say it, perhaps we should consider... surrender. We must think of the countless trillions who will be lost should we take up arms in a hopeless struggle."
Aoirtae: "It's not hopeless! We have this one chance and if we fail, we doom the galaxy to an eternity of tyranny and oppression. We can't let that happen."
―Senator Buroa and Aoirtae Valaeris

During the New Cyrandia Wars, her sympathy with the Confederacy of Free Planets made her instrumental in organising the peace conference on the Sword of Peace, during which the Empire and the Confederacy ended their conflict and agreed to co-exist. Celebrated for the achievement, after the war, Amirtae became a major candidate for President in the election in 07 NE, in which she championed the reform of the Republic into a less unitary state. As such, she conflicted with Senator Nexarón Valkistair of Caelis'caeri, whose anti-Imperial platform won him widespread support amongst the Republic's citizenry. With the campaign becoming increasingly hostile, Buroa's claim that Nexarón Valkistair was a warmonger led to a drop in polls and she later withdrew from the race, endorsing her colleague Senator Raesa. Ultimately however, Nexarón Valkistair won the Presidency, with Buroa emerging as one of his most vocal critics in the Senate.

In 11 NE, Buroa became the subject of heightened media attention when she briefly dated Senator Apollo of Capricaerón. The relationship was a favourite topic for the tabloids for two months, though the two senators ultimately agreed to part ways, though they remained friends.

She later travelled alongside Apollo, as well as fellow Senators Ramdard Ramthrace and Roth Caesenn to Aldár to discuss plans for the Battle of the Ecimaex Wall. Her attendance ultimately saved her life, as she had been absent from Mou'Cyran when the Cyrannic Imperial Battlestation destroyed it. Though distraught, she voted in a unanimous election among the surviving senators, resulting in Apollo's ascension to the Presidency. After the Battle of Cadian, she travelled to Capricaerón to help form a new government.

Once the new Senate had been established, Buroa took her seat once more as the Senator of Achiliquin, often relaying her government's wishes to President Apollo, who feared that Achiliquin could be used as a rallying point for Imperial forces seeking to retake Coru Secundus. In 17 NE, almost two years after the conflict first began, Buroa was captured on her homeworld when the Phaedric Lord Maethoruin besieged the planet. Before being captured, however, Buroa managed to send a distress call to Capricaerón, prompting the Republic fleet to arrive in a desperate attempt to retake the planet.

After three weeks in captivity, Buroa was rescued by the young Cargura tirolenros Arasah Nui, who brought her to the Republic's main base of operations on the planet. There, she made an announcement that the Republic would fight to the bitter end to protect Achiliquin's citizens, helping to turn the tide of the battle. Once the Republic secured victory on both ground and in orbit, Buroa was left with the daunting task of restoring order to a devastated world.

Present on Capricaerón during the Fall of the Twelve Worlds in 17 NE, Buroa worked closely with Senator Raen Magalen on supporting the efforts of the growing rebellion against the rule of Zare'Anne and his corrupt Occupied Republic administration. After the Liberation of Capricaerón in 20 NE, she worked closely with President Apollo to restore the Senate, which was ultimately re-established on Orbispira following the planet's liberation.

After the end of the Second Great War, Buroa was voted Vice President by the Senate, serving under President Kyrsá Nimrais from 26 NE to 34 NE. A popular politician as Vice President, Buroa was elected to succeed Nimrais in the 34 NE Presidential Election in a landslide, though made a pledge that she would only serve two terms in office. Honouring the work of her late mother, Buroa made fostering friendly relations with the Confederacy of Free Planets a priority, and though her ultimate goal of unification between the two powers did not come to pass, her efforts made her a popular figure on both sides.

In the 37 NE election, Buroa remained neutral in the contest, and was succeeded by Senator Laoi Cretacea. After her term had ended, Buroa returned to her native Achiliquin to write her memoirs and work to improve the quality of life of people across her native sector.

A conscientious and passionate woman, Amirtae Buroa is a popular poltician in the New Republic, having previously served as a figurehead of the Reformist political faction in the Senate. In the party, she espouses a moderate platform in which she believes that the Republic should be reformed to resemble the Federation of United Worlds, albeit one with a stronger military and structures designed to resist the corruption and stagnancy which necessitated the formation of the unitary United Republic of Cyrannus in 53 BNE. As such, Buroa is a strong believer in the individual right of worlds to decide their own destinies, distrusting central authority figures such as President Nexarón Valkistair. In this manner, she espouses similar views to her late mother, whose membership in the Confederacy of Allied Systems resulted in Amirtae developing sympathy with the Confederacy of Free Planets.

“I enjoyed our time together, though it's best that we remain friends.”

“An obstructionist if ever there was one. The galaxy needs a strong Republic, not the weak Federation desired by Reformists such as Buroa.”

“Watch out! Woman has two hats!” 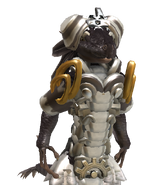